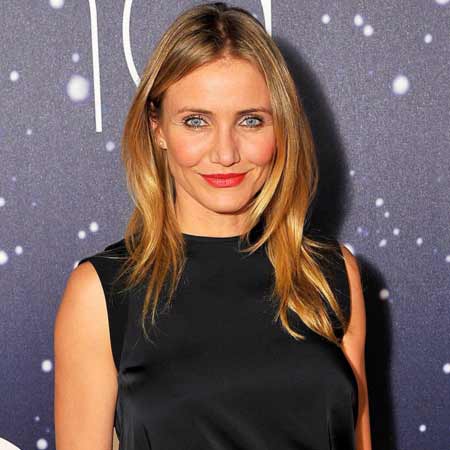 Teen Choice Awards winning American actress, Cameron Diaz is also a model and author. Diaz started modeling at the early age of 16. She modeled for several famous brands including Levi’s and Calvin Klein. She rose to stardom from her role Tina Carlyle in her debut movie, The Mask. After that, she appeared in several independent movies like Feeling Minnesota, She’s the One, The Last Supper and Head Above Water among others. Diaz is well-recognized for her roles in several hit movies including My Best Friend’s Wedding, Being John Malkovich, Vanilla Sky and There’s Something About Mary. She is also popular for voicing Princess Fiona in the Shrek franchise. Throughout her two decades of career, she won several prestigious awards including ALMA Awards, Kids Choice Awards, Teen Choice Awards and MTV Movie Awards. Active in the industry for the last two decades, she earned an impressive net worth too. In 2010, Forbes listed her as top richest female celebrities.

Cameron Diaz was born Cameron Michelle Diaz on 30th August 1972 in San Diego, California under the birth sign Virgo. Diaz is American by nationality and belongs to Hispanic ethnicity. She is the daughter of Anglo-German mother, Billie Early (was an import/export agent) and Cuban-American father, Emilio Diaz (worked as a foreman for Unocal, the California oil company). She has a sister, Chimene Diaz and a brother, Michael Diaz.] 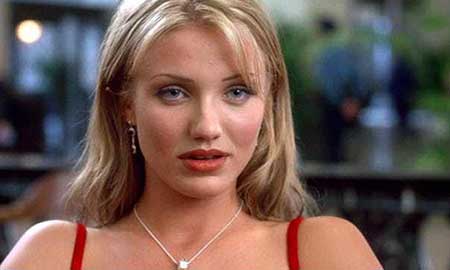 Her ancestors are originally from Spain who later moved to Cuban. Before her birth, her family moved to California. Her parents raised her with her siblings in Long Beach. She attended Cerritos Elementary School and Long Beach Polytechnic High School with rapper Snoop Dogg.

At the age of 16, Cameron Diaz left home and lived in Japan, Mexico, Morocco, Paris, and Australia. From an early age, she started her career as a model. She signed several contracts with different model agencies including Elite Model Management.

Later, she modeled all over the world on contract for companies like Levi’s and Calvin Klein. In 1989, she featured on the cover of July 1990 issue of Seventeen. She also appeared on a commercial for Coca-Cola in Sydney.

At the age of 19, she was photographed and video graphed topless by John Rutter (photographer) and Clifford Wright (producer) for S&M leather fashion lingerie which was never released.  In 2003, Rutter offered Diaz to buy the video and photographs for $3.5 million before selling them to prospective buyers. He also offered her ‘first right of refusal to them’.

Diaz saw the offer as attempted blackmail so she sued him. The following year, the 30-minutes video of her photographs were released by a Russian website. The photographer denied the release of the video. On 26th July 2005, the photographer was convicted of attempted perjury, forgery and grand theft at the Los Angeles Superior Court. The same year, he faced up to six years in prison.

At the age of 21, Diaz gave an audition for the fantasy superhero comedy film, The Mask. She earned the role of Tina Carlyle without having no past acting experience. She rose to stardom after working in the movie. After the success of the movie, she was launched as a sex symbol.

Soon after the new-found fame, Diaz landed a lead role in the black comedy film, The Last Supper by Stacy Title. Back to back, she appeared in numbers of movies, such as She’s the One, Feeling Minnesota, Very Bad Things, The Invisible Circus, Vanilla Sky, The Holiday, The Box, Gambit, and Sex Tape among others.

She, however, is popular for several hit movies which are:

Diaz is also popular for other movies like The Mask, My Best Friend’s Wedding, There’s Something About Mary, Charlie’s Angels: Full Throttle, What Happens in Vegas and Knight and Day among others.

She also voiced several animated movies. Among them, she is popular for voicing the character of Princess Fiona in Shrek franchise (2001-2010).

‘’ I just went, 'I can't really say who I am to myself.' Which is a hard thing to face up? I felt the need to make myself whole.’’

Diaz has not announced anything regarding new projects yet.

Cameron Diaz has been nominated for several prestigious awards for her acting in the movies and TV series. Here is a list of awards that Diaz has bagged:

Cameron Diaz has an estimated net worth of $140 million as of 2019. In 2010, Forbes listed her as one of the wealthiest female celebrities. Her major source of income is her acting career. As per the record of 2015, her movies have made over $3 billion in America and over $7 billion worldwide. Moreover, she was paid over $10 million for voicing Princess Fiona in Shrek franchise.

Here is the list of her hit movies that made an impressive collection at the box office:

Diaz also earns a good amount from her published books:

Diaz has a collection of luxury cars: 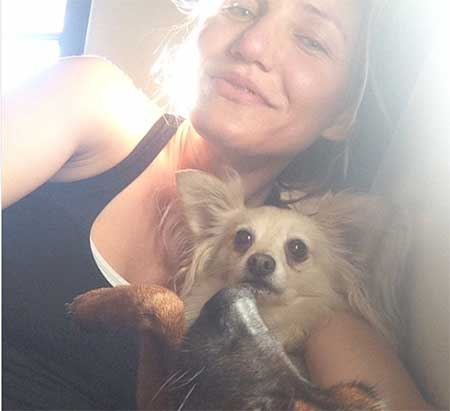 During the 2000 presidential election, Diaz endorsed American politician, Al Gore. She has been involved in the largest non-profit organization, Iraq and Afghanistan Veterans of American (IAVA).

Cameron Diaz is a married woman. On 5th January 2015, she exchanged vows with her musician boyfriend, Benji Madden in a Jewish ceremony despite the fact that neither of them is Jewish. They kept their wedding secret for some months from the media. 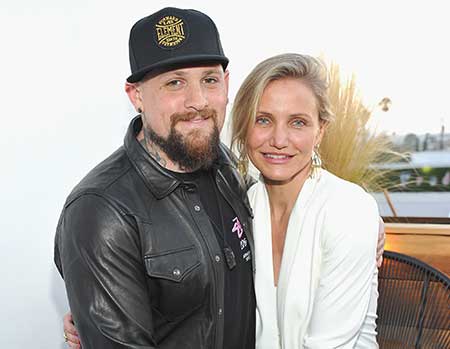 Diaz is happily married after a number of failed relationships. She also stated,

''I think it’s a matter of I just hadn’t met my husband, you know? I had boyfriends before. And there’s a really, really distinct difference between husbands and boyfriends. And I have a husband who is just my partner in life and in everything. Talk about two very different people! We are so different from one another, but we share the same values — we’re totally two peas in a pod. We are both just weird enough for each other.''

17 days before the wedding, the couple got engaged in a surprise ceremony at Cameron’s Beverly Hills home. The couple met for the first time with the help of Diaz’s friend and now sister-in-law, Nicole Richie.

Diaz is trying for a baby with her husband. She has tried many ways to get pregnant including fertility treatment. As per some online sources, Diaz is expecting her first child at the age of 45. She, however, has not confirmed the news yet.

Previously, Diaz has dated many celebrities from Hollywood. From 1990-1995, she was in a relationship with producer Carlos De La Torre. The couple started dating after meeting on the sets of the movie, LA Gear. She broke up in 1995 after her career took off. 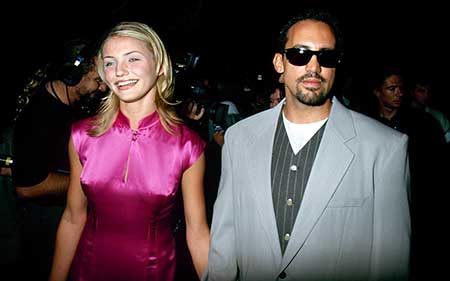 CAPTION: Cameron Diaz with her ex-boyfriend, Carlos.A SOURCE: The Telegraph

The same year, she dated film director and actor, Matt Dillon. The couple broke up in 1995 after the filming of the movie, There’s Something About Marry. In 2006, Dillon spoke about the separation,

‘’ I was dissatisfied with where I was as a man, with my relationships, with my career . . . I thought my career was who I was. It wasn't until later that I discovered I was more than that . . . Cameron was a muse for me.’’

From 1999-2003, she dated American actor and singer, Jared Leto. Following their split, he dated Paris Hilton and Scarlett Johansson.

In 2003, Diaz dated a famous American actor, and singer, Justin Timberlake. They started dating after meeting at the Nickelodeon Kid’s Choice Awards. In 2007, the romance fizzled but they remained friends afterward. The couple released a statement,

‘’ It has always been our preference not to comment on the status of our relationship, but out of respect for the time we've spent together, we feel compelled to do so now in light of recent speculation and the number of inaccurate stories that are being reported by the media. We have, in fact, ended our romantic relationship, and have done so mutually and as friends, with continued love and respect for one another.’’

Soon after the separation, Diaz was rumored to be dating a magician and musician, Criss Angel after they were spotted on several occasion in Las Vegas. During his performance in NYC in June, Angel opened up about his relationship with Diaz,

‘’I’d like to dedicate this to my girl Trouble, Cameron. I love you, baby.’’

The same month, Angel's wife filed a divorce and a lawsuit for his affair with Diaz.

In 2008, Diaz dated British model, Paul Sculfor. At the US Open in New York, they were seen being cozy. The following year, they broke up. 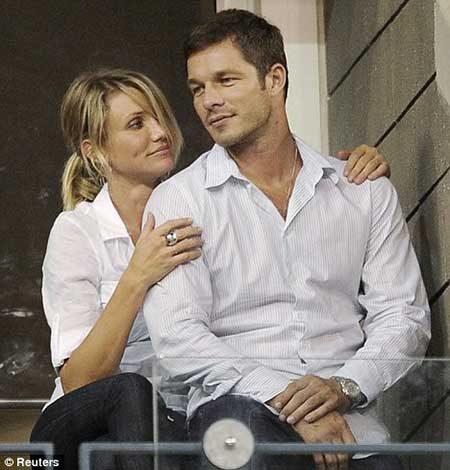 Diaz had an on-off relationship with a former professional baseball shortstop and third baseman, Alex Rodriguez from 2010-2011. In an interview with The Insider, Rodriguez told,

‘’ I don't like talking about my relationships, but I will tell you about Cameron Diaz. She's probably one of the greatest human beings I've ever met and just an amazing light.’’

In 2005, National Enquirer posted an article with the headline ‘’Cameron Caught Cheating.’’ The photos claimed that she was cheating on her then-boyfriend, Justin Timberlake with Shane Nickerson, MTV producer of the show, Trippin.

Diaz then received substantial defamation damages from suing the American Media Incorporated. Soon after the complaint, the article was removed and the magazine apologized them for their article.

Enquirer is also known as an environmental activist who became an early adaptor of the Prius electric car. The car helped to raise awareness of climate change.

The 1997 Time article stated that she was germophobic after she passed a comment regarding the public-bathroom doorknobs. In 2003, she broke her nose in a surfing accident in Hawaii.

Enquirer is fond of yoga.

Here is the video, which shows the 10 facts about Cameron Diaz: