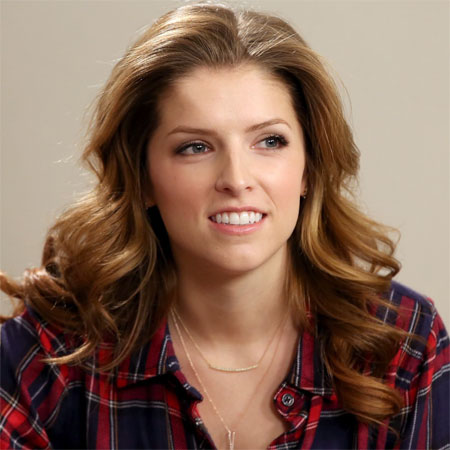 Anna Kendrick is a talented and a very versatile American actress and singer who is active in the entertainment world since 1998 till present. She rose into stardom worldwide after her award-winning performance in the movie Up in the Air as Natalie Keener in 2009. For the performance, she was nominated in the Academy Award, BAFTA, Golden Globe and Screen Actors Guild Award for Best Supporting Actress.

She has been dating cinematographer Ben Richardson since 2014, after splitting from Edgar Wright in early 2013.

Born in the year 1985 August 9 at Portland, Maine, United States, she is the daughter of an accountant Janice and history teacher and finance officer William K. Kendrick.

Anna belongs to the English, Irish and Scottish descent and has the American Nationality. She has an older sibling named Michael Cooke Kendrick. She had attended Deering High School in Portland and graduated in 2003.

Anna started her acting career at the mere age of 10. Her parents were very supportive of her because of which she has been able to reach in this position. During that time, her parents drove her to New York from Portland for auditions.

She won her first acting role in the Broadway musical High Society in August 1998 at the age of 12 as Dinah. For her performance, she won the Theater World Award and was nominated for Tony Award and Drama Desk Award standing her as a third-youngest Tony Award nominee.

Afterward, she began to appear in movies, television series and also appeared on stage in A Little Night Music as Frederika Armfeldt in the year 2003.

Since 2003, she began to appear in several of the movies and television series as a teenage actress. Her debut in the film arena is from the movie Camp in the year 2003 as Fritzi Wagner and in The Mayor as Sadie Winterhalter in the television arena.

Besides, she appeared in television series like Viva Laughlin in 2007, Fear Itself 2009, Family Guy 2012, Comedy Bang! Bang! 2013 and in Saturday Night Live as a host in an episode with Pharell Williams. Her upcoming movies are Life After Beth, The Last 5 Years, Happy Christmas and she is busy in filming in the movies Into The Woods as Cinderella, Pitch Perfect 2 as Beca Mitchell, The Hollars as Rebecca, Cake as Nina.

Besides being active in acting in television and films, she has also appeared in the three of the music videos. She has also the singing talent. She has sung a song called “Cups (Pitch Perfect’s When I’m Gone) from the album Pitch Perfect in 2013.

Anna Kendrick's net worth is $14 million at present. She earned her net worth through her acting career on stage, screen, and television.

Due to her applauding performance and talent, she has been nominated and has won several of the awards and honors since her debut in the entertainment world. Anna Kendrick is a young talented and versatile celebrity who has recently been the number 8 most creative people in Business as of 2014 by the Fast Company Magazine. Her song “Cups” was nominated for the World’s Best Song, World’s Best Video and World’s Best Female Artist in 2014 World Music Awards.

Such a talented, young, gorgeous and beautiful actress Anna Kendrick has a banana-shaped body with the body measurements measuring 34-24-35 inches. She stands the height of 5 feet and 2 inches tall and weighs 52 kg.

Her body is slim and has been the hot topic for many of the female viewers of hers. Talking about her personal life, she is currently single. She has an affair with an English director Edgar Wright since 2009 as they met on the set of 2010 movie “Scott Pilgrim vs The World” where Anna was an actress and Edgar was the director for the movie.

Their relation lasted for five years ending in 2013 for certain issue which has not been disclosed. Previously in 2011, there was a rumor that Anna was dating Jake Gyllenhaal as they were seen hanging out together. But the rumor got cold and nothing came out of the relation. For the time being, Anna does not have any boyfriend and she is concentrated on her work.

Fans of Anna can follow her on facebook and twitter and visit on different sites to know more on her and get updated with her recent activities and involvement. Her pictures are widely found on the internet where she flaunts in different outfits with the stunning looks of her.