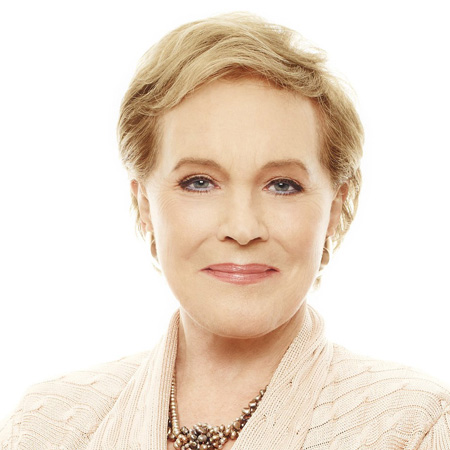 Julie Andrews is a British actress, known for her role in the films including Mary Poppins, Victor/Victoria, The Sound of Music, Mary Poppins and much more. Andrews has received various awards such as Academy Awards, three Grammys, BAFTA, five Golden Globes, Screen Actors Guild Lifetime Achievement Awards, two Emmys and more. Apart from acting, Andrews is a singer as well as author who has written children’s book and published auto biography like Home: A Memoir of My Early Years.

Julie Andrews was born as Dame Julie Elizabeth Andrews on 1st October 1935 in Walton-on-Thames, England. She holds British nationality and ethnicity wise; she is a Caucasian.

Andrews is born to Barbara Ward Wells & Edward Charles Wells, a teacher of metalwork as well as woodwork. However, her parents divorced after an outbreak of World War II.

Andrews grew up along with her brother, John, and father in Surrey. She was raised in a low-income family and lived in a slum area of London when she was a child.

Andrews’s step-father, Ted Andrews, sponsored her education at the Cone-Ripman School. Later, she attended the Woodbrook School, in Beckenham.

Julia Andrews made her first stage performance along with her mother, Barbara, and step-father, Ted at her early age in 1945, and continued it for the next two years.  During the time, she got an opportunity to meet, a British television managing director as well as presenter, Val Parnell.

Andrews made her Broadway debut in the third-longest running musical, The Boy Friend which was one of the successful London musicals.  And Andrews was the stand-out performer in the show.

Apart from acting, Andrews has published, Home: A Memory of My Early, an autobiography which was the best-selling memoir, published on 1st April 2008 by Hyperion. Andrews has even published different children’s books like The Last of the Really Great Whangdoodles.

Moreover, Andrews has also worked in famous hit TV series as well as a stage show, Victor/Victoria and The Julie Andrews Hour.

Julie Andrews' Net Worth, Salary, And Major Source Of Income

Julie Andrews has earned an enormous amount of net worth from her successful career as an actress, singer and author as well. Currently, her net worth is around $45 million as per celebrity net worth.

The actress also landed the role in the movie Despicable Me which became the quite hit at the box office grossing over $546 million worldwide against a budget of $69 million. In the movie, the actress shared the screen along with Steve Carell and Jason Segel.

Julie Andrews married twice in her entire life. She was first married to Tony Walton, a set designer as well as a costume designer. The duo first met at the London Casino, Humpty Dumpty in 1948.

The couple tied the knot on May 10, 1959, in Weybridge, Surrey. With her husband, she gave birth to a daughter, Emma Kathrine Walton in November 1962. However, after being together for eight years, they divorced in 1967.

In 1969, Andrews married American movie director, producer as well as a screenwriter, Blake Edwards who later died in 2010. They even adopted two daughters, Joanna, and Amy in the 1970s.