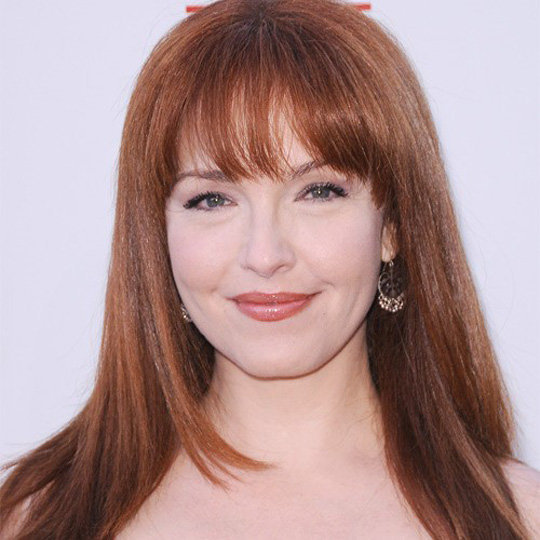 Amy Yasbeck, an American actress, is known best for her appearance in the movie The Mask, Pretty Woman, and Robin Hood: Men in Tights. She is a widow of John Ritter, a legendary country singer, and actor. Amy Yasbeck can be recognized best for having long red hair. She is also an author of a book, “With Love and Laughter, John Ritter’.

Amy Yasbeck was born as Amy Marie Yasbeck on 12 September 1962 in Cincinnati, Ohio, the USA to parents Dorothy Louise Mary and John Anthony Yasbeck. Her father was a Lebanese descent and her mother was of Irish ancestry. As a child, Amy was featured on the cover of the Betty Crocker Easy Bake Oven.

Amy Yasbeck attended Summit Country Days School and Ursuline Academy. She attended the University of Detroit where she studied theater. Amy moved to New York after the death of both of her parents.

Amy Yasbeck's Career And Net Worth

Amy Yasbeck started her career in acting since 1985 from an unsold television pilot, Rockhopper. She has appeared in a number of television shows and films including Spies, J.J. Starbuck, Magnum, China Beach, Pretty Woman, Problem Child and much more.

She is a recognized named in the American entertainment world. Amy was also a contestant on Are you smarter than a 5th grader? Amy Yasbeck's current net worth is estimated to be around  $5 million.

Amy Yarsbeck is the widow of actor and country singer John Ritter. She had met John for the first time at director Dennis Dugan’s house during the read-through of the movie Problem Child. John Ritter and Amy Yasbeck had worked on several projects together. John was 14 years older than Amy. He thought Amy is too young to play as his wife in the movie.

After working on-screen wife, it was not hard for Amy Yasbeck to be John’s real-life wife. The couple married each other on 18th September 1999 at the Murphy Theater, Wilmington, Ohio. The couple has a child, a daughter named Stella Ritter. Stella was born in September 1998, a day before Amy’s 36th birthday.

Amy has three step-children from her husband’s previous marriage. The month of September is Amy’s family month as Amy was born in September so is her daughter and even John Ritter’s birth and death month is September.

John fell in a coma when he was rehearsing for 8 simple rules for dating my teenage daughter. He was taken to the hospital and thought to suffer from a heart attack. However, he died at 10:48, the same night.

The cause of his death was aortic dissection stemming from a previously undiagnosed congenital heart defect. For the reason, Amy Yasbeck filed a $67 million wrongful death lawsuit against Providence Saint Joseph Medical Center and several doctors who had treated John. On 2008 March, the jury split 9-3 in favor of the doctors.

Amy is currently dating lawyer Micheal Plonsker who is very supportive and loves her very much. The couple seems very happy together.