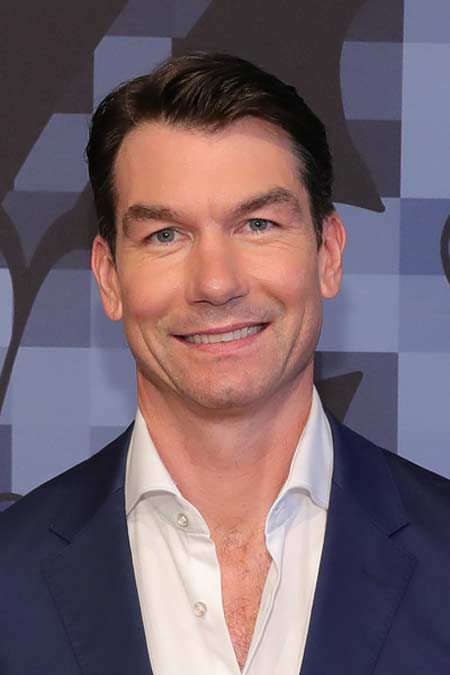 Talented American actor, Jerry O’Connell is well known for his debut movie, Stand by Me where he portrayed the role Vernon ‘’Vern’’ Tessio. He won Young Artist Award for his performance in the movie. Regarding TV series, he is popular for his role, Andrew Clements (14-year-old boy) in CTV’s TV series My Secret Identity  for which he got nominated for Young Artist Awards twice.

Some of his movie credit include Scream 2, Kangaroo Jack, The Defenders, Piranha 3D and Jerry Maguire. Active in the industry from the last 32 years, he has acc u mulated an impressive net worth. O’Connell is married to his girlfriend, Rebecca Romijn with whom he shares twin girls, Dolly Rebecca Rose and Charlie Tamara Tulip O'Connell.

When he was young, his parents enrolled him into acting and fencing cla s ses. Connell attended Professional Children’s School and later graduated with a degree in film from the New York University. While studying in the university, he also studied screenwriting and also competed in the fencing team. In 2009, he joined Southwestern Law School but drooped out to continue his acting career.

In the initial phase of his career, Jerry O’Connell appeared in commercial work for Duncan Hines Cookies and Frosted Flakes (1987).

Jerry O’Connell made his Hollywood debut in 1986 as Vernon ‘’Vern’’ Tessio in the coming-of-age drama film, Stand by Me based on Stephen King’s novel The Body. In 1993, portrayed the role of Scott Foreman in comedy-drama film, Calendar Girls alongside Jason Priestley, Gabriel Olds, Joe Pantoliano and Kurt Fuller. His performance in the movie helped him to win a Young Artist Awards in 1987.

O’Connell then worked in several movies such as Joe’s Apartment, Jerry Maguire, Body Shots, Mission to Mars, The New Guy, Buying the Cow, Yours, Mine and Ours, Obsessed, and Wish Upon among others. Particularly, he is famous for:

In 1986, O’Connell appeared first time on TV in The Kingdom Chums: Little David’s Adventure as Osborne. He then worked in several TV series and TV movies in uncredited roles. In 1988, he appeared in his first lead role, Andrew Clements (14-year-old boy) in CTV’s TV series My Secret Identity. The series starred Derek McGrath, Wanda Cannon, and Marsha Moreau.

O’Connell then appeared in several TV series such as TGIF, Blue River, Sliders, Night Vision, Ugly Betty, The Batman, Carpoolers, Fish Hooks, Billions, Mistresses and Andi Mack among others. He, however, is famously known for:

Jerry O’Connell not only earned huge fan following but also grabbed an eye-catching net worth. As of 2018, O’Connell has an estimated net worth of $16 million.

Here is the list of his hit movies that made a good collection at the box office:

O’Connell is involved in several charity works. He hosted a program for The Christopher & Dana Reeves Foundation which works to find treatments and cures for paralysis.

Stand by Me actor, Jerry O’Connell is married to his girlfriend, Rebecca Romijn (former model and actress). The couple met at the party in 2004 for the first time when Romjin was with her then-husband, John Stamos.

‘’ I met my wife and her ex John Stamos at a party when they were married. I remember thinking, ‘Wow. This girl is really beautiful and funny.’ I talked to her the whole party. My wife remembers that party and remembers us clicking. We clicked. My wife and I clicked. We clicked the first time we met.’’

Though the pair had an instant chemistry, O’Connell disclosed that nothing happened between them.

In 2005, Romijn divorced her Stamos. Following the divorce, O’Connell started hanging out with her and eventually started dating. O’Connell told their story,

''I hung out with her pretty much all day and her friend. We went out to dinner that night, a group of us. It wasn’t any kind of date. Then her friend, a guy said to me, ‘Take her phone number. I think she wants to call you.’ I was working it. I got her phone number, and I called her, and then we met up after that Vegas trip back in Los Angeles. We went out.’’

‘’I want to tell you this about my wife, and my wife says it funnier than I do, but we met. We started hanging out. I came for a sleepover … and I never left. That’s the truth. We just clicked.’’

After dating for months, the couple announced their engagement in 2005. O’Connell proposed her during their trip to New York. He told,

‘’I can’t believe she said ‘yes’ when I asked her to marry me. I keep waiting for Aston Kutcher to pop out and tell me I’m being ‘Punk’d.’’

Finally, the couple tied the knot on 14th July 2007 in a private ceremony in LA in the presence of 100 families and friends. The bride wore a Ralph Lauren gown and Neil Lane jewelry on their wedding.

Some months after their marriage, the couple announced that they were trying to get pregnant. Later a publicist confirmed that Romjin was pregnant with twin girls. O’Connell spoke some words about having children,

‘’ I am excited I am having girls. I know guys are supposed to say, 'I want a boy. I want to play baseball,' but I think I'm going to be good at raising girls...I can't wait. They're going to be tough chicks. They're only having sex when I'm dead. If they don't date boys at all and just want them to be infatuated with their father, that's what I'm really going for.’’

Before there was Silicon Valley, there was The San Fernando Valley.

The couple is together for over a decade and still going strong without any divorce rumors.

Previously, O’Connell dated American-Italian TV personality, Giuliana Rancic from 2003-2004. After their break up, Rancic accused him of cheating with singer and songwriter, Geri Halliwell. Rancic wrote,

‘’ I was being two-timed for one of the lesser Spices?’’

“He had as much emotion as the customer-service representative who tells you your bags missed the flight.’’

“For those who don’t know. Giuliana Rancic is a personality and she wrote a book and we dated and then we didn’t date and, um, I was in the book.’’

''I don’t want to say anything negative. She was a very nice girl. We had a very fun time. It was decades ago.” (One decade, actually.) I mean, I don’t believe cell phones were in use then. I think it was, like, horse and buggy. It was you know, it was a while ago.’’

Here is the video where Jerry O'Connell talks about his first meeting with his wife: