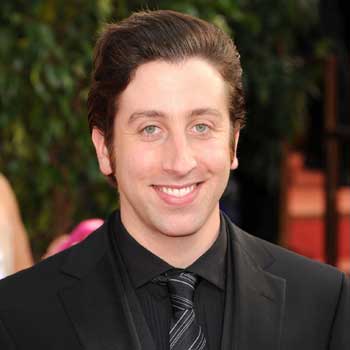 Simon Helberg is popular among his fans as character Howard Wolowitz in the sitcom The Big Bang Theory. Simon is a prominent American actor, voice actor and also a comedian. He has appeared as minor characters in many movies. Simon has appeared famous on the sketch comedy series MADtv and is also known for his character Moist in the web miniseries Dr. Horrible’s Sing-Along Blog. Simon has been nominated in a few awards including Screen Actors Guild Award and teen choice awards both for his acting in The Big Bang Theory. Also for his exceptional acting in The Big Bang Theory aired by CBS, Simon has won a Critics’ Choice Television Award for Best Supporting Actor in a Comedy Series.

Simon Helberg was born on 9th December 1980 in Los Angeles, California and is the son of actor Sandy Helberg and casting director, Harriet Helberg. Simon’s religion is Jewish, ethnicity is white, nationality is American and was raised fully in Judaism.

Simon was highly enthused by the film The Karate Kid due to which he was so interested in Karate that he began training in it during his tender age and won a black belt at the age of ten.

Simon joined Crossroads School based in Santa Monica, California for his middle and high school. He then attended New York University’s Tisch School of the Arts where he was trained at the Atlantic Theater Company.

Coming from a family background that focused on entertainment and acting, Simon had an upper hand and got into the cast of MADtv for one of its seasons in 2002. Before it, he had appeared in a few movies.

In the same year, Helberg appeared in film Van Wilder as a geeky student which may have been the base of his character in The Big Bang Theory. Simon received a minor role in the 2003 movie Old School. The very next year Simon was seen in two episodes of Reno 911: Student Driver in Raineesha X and Hooker Buying Son in Not Without My Mustache.

Simon landed a small role in Quintuplets: Get a Job. Then Simon went on to be a minor character in the film Walk Hard: The Dewey Cox Story as a Jewish record producer. He has also been seen on 2004 film A Cinderella Story.

In George Clooney’s 2005 film Good Night and Good Luck, Simon played the minor role of character Terry. The very next year he acted as Jeff on Arrested Development. Then Simon landed a role of Alex Dwyer in the drama Studio 60 on the Sunset Strip from 2006 to 2007. Also in 2006, Simon appeared in the TV commercial for Richard Branson’s UK financial services company Virgin Money.

Helberg has performed in the sketch comedy duo Derek and Simon with fellow comedian Derek Waters. They appeared in two short films titled “Derek & Simon: The Pity Card” and “Derek & Simon: A Bee and a Cigarette” which were both successful.

In 2005 they had a deal with HBO. In 2007 Derek and Simon went on to create a web series with fellow comedian Bob Odenkirk titled Derek & Simon: The Show for the comedy website Super Deluxe.

One of Simon’s most renowned characters is Moist in Dr. Horrible’s Sing-Along Blog. Helberg appeared as a junior Rabbi Scott Ginsler in Coen brothers 2009 film A Serious Man. He was then seen as a minor character in the season 4 finale of The Guild as one of the Game Masters.

Helberg became a household name when he was cast as Howard Wolowitz in the hit sitcom, "The Big Bang Theory" in 2007. He earned $23 million between June 2015-June 2016.

Helberg and wife Jocelyn bought a Hollywood estate that is 4179 square foot in $3 million USD, which shows the couple's net worth at large. In 2009, the actor played the role in the back comedy A Serious Man which became the quite hit at the box office grossing more than $31 million against its budget $7 million. In the movie, she played the role along with Michael Stuhlbarg, Richard Kind, Fred Melamed, and Sari Lennick.

His another movie Florence Foster Jenkins which also grossed a whopping box office collection making $56 million worldwide. In the movie, she featured along with Meryl Streep and Hugh Grant.

For his role he has nominated a Teen Choice Award Choice TV: Male Scene Stealer in 2010 and also a Screen Actors Guild Award Outstanding Performance by an Ensemble in a Comedy Series in 2012. Simon fully deserves these nominations and award because of his spectacular performance.  Helberg stands at the height of 5 feet 4 inches.

Simon met and began dating Jocelyn Towne in 2002. They married on 15th July 2007. Jocelyn is 5 years older than Simon. The couple has two children; daughter Adeline born on 8th May 2012 and a son Wilder Towne Helberg born recently on 23rd April 2014.

The second pregnancy was a shock to the public when Jocelyn appeared in the red carpet with a baby bump.

There are recent rumors about the couple planning to divorce or separate but the rumor seems to be absolutely fallacious because they both seem to be happy together. Simon’s fans want to see more of him in The Big Bang Theory and the acting arena as a whole.