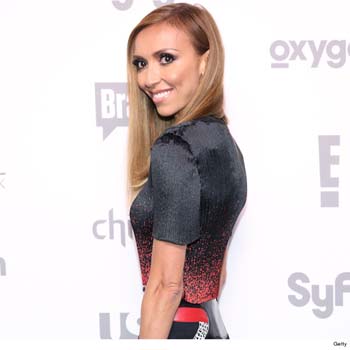 The hot and skinny Italian American television personality and journalist, Giuliana DePandi Rancic is eminent for her anchoring abilities thrown to light through E! News. Many people may recognize Giuliana as a host in many pageants and many may have also seen her take charge of the red carpet at almost all awards shows for her network.

Born on August 17, 1974, in Naples, Italy, Giuliana Rancic is the daughter of master tailor, Eduardo DePandi. While she was still young, Giuliana and her family moved to Bethesda, Maryland where the family owns a high-end men’s clothing story. Giuliana has two siblings; sister, Monica and brother, Pasquale (opera singer).

Giuliana has always aimed to become an anchorwoman, thus she learned English by watching hours of news channels. Giuliana attended Walt Whitman High school then; she joined University of Maryland, College Park, from where she received her bachelor’s degree in journalism.

Giuliana then went on to get a masters degree in journalism from American University, at the American University School of Communication located in Washington D.C. Rancic also reported for a Capitol Hill news bureau covering the Pentagon, the Supreme Court, the White House and the State Department while she was in D.C.

Rancic was first seen on the big screen in the 2003 comedy movie Malibu’s Most Wanted , but she was not noted for that because of her minor role. Giuliana had joined E! network as a correspondent in 2002.

On March 13 2006 , she was made an anchor at E! News.  As soon as Rancic took the center stage, the viewership increased by 50%. Rancic also started being a co-host in red carpet events for award shows like Golden Globe and the Academy awards.

In 2007, Rancic appeared in the American superhero film, Fantastic Four: Rise of the Silver Surface. In 2009, she appeared in Direct-to-video teen comedy film Bring It On: Fight to the Finish. In the same year Rancic also played “Are You Smarter than a 5th Grader” for a charity on October 13, 2009.

Giuliana and husband Bill started their reality show named “Giuliana and Bill” which premiered on the Style Network on August 5 2005.the series is currently running its 7th season.

Rancic became a co-host on Fashion Police since September 10 2010. In 2011, Rancic hosted the Miss USA pageant. In 2012, Giuliana appeared on E! True Hollywood Story showing the biography of her life. In the same year she yet again hosted Miss USA pageant and also Miss Universe 2012.

In 2013, Rancic co-hosted TV series, Ready for Love alongside husband, Bill. Rancic went on to co-host both Miss USA 2013 and 2014. Giuliana is a co-founder of FabFitFun, a woman’s health, diet, beauty and fashion website

Giuliana Rancic stands tall at the height of 5 feet 8 inches, and needless to say, is very skinny with a weight of 49.9 kgs. Her body measurements are 34-23-34. Although Giuliana denies, it is evident from her before-and-after pictures that Giuliana has had multiple plastic surgeries.

Giuliana is often rumored to be an anorexic due to her lean and thin body. All the more, Rancic was ranked #94 in 2004 issue of Maxim Hot 100 Women. Not only that Rancic was featured in People Magazine’s 100 Most Beautiful of 2006 issue.

Giuliana Rancic was also nominated Favorite TV Celebreality Star for the 2012 People’s Choice Awards. All in all, Giuliana shows an excellent example of successful journalism career through constant hard work.

Giuliana is currently a co-anchor on E! News, co-host on Fashion Police and also hosts in her own reality show; Giuliana and Bill with husband Bill Rancic.

They began dating in 2005, announced their engagement 15th December 2006 and got married on September 1, 2007, at Sancta Sophia church in Anacapri. The couple has willingly revealed their fertility issues on television talk shows.

The couple tried to conceive since 2009 but was not successful so they began In Vitro Fertilization (IVF) in March 2010. Finally, Rancic got pregnant in the spring of 2010 but sadly had a miscarriage at nine weeks.

For the second time, Rancic had an IVF transfer in November 2010 but it resulted in a failure. Her doctor later recommended Rancic for a Mammogram, through which she later found out that she had breast cancer.

Giuliana went through a surgery in October 2011 and on December 5 of the same year revealed that she was to undergo a double mastectomy. Rancic was in the early stage thus she had to go for lumpectomy and radiation.

However, the Rancic couple were determined to have a baby, thus they continued with the egg retrieval and found a surrogate. The couple welcomed a son named Edward Duke Rancic on August 29, 2012.

Recently, the couple tried to have another baby but on June 1, 2014, they revealed that their surrogate had a miscarriage. Giuliana Rancic has signed a new contract with E!, which guarantees that she’ll be sticking with the network till the end of 2015, thus it is certain that more of Giuliana will be seen until next year.

In one of the Episodes of “Giuliana and Bill”, Giuliana considers plastic surgery and later gets a laser treatment done. Giuliana is rumored to have a salary of $1 million and has a net worth of $7 million. Giuliana met American Entrepreneur and The Apprentice winner, Bill Rancic while Giuliana was interviewing Bill for E! News.