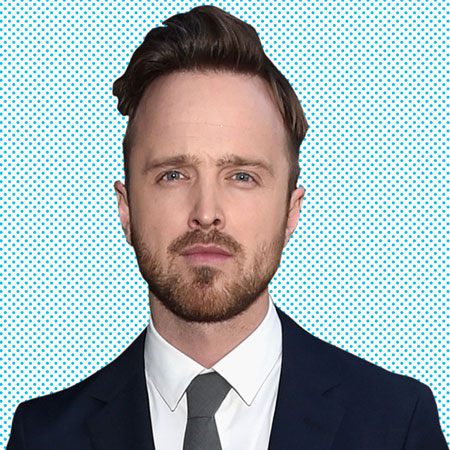 Widely recognized for his Primetime Emmy Award-winning character Jesse Pinkman on the AMC series Breaking Bad, Aaron Paul is one of the prominent faces in the Hollywood Industry. He is one of the first five actors to win two Primetime Emmy Awards for Outstanding Supporting Actor in a Drama Series for his portrayal of Jesse. Starting his career with music video and TV, Paul first made his breakthrough after appearing in an episode of the television series Beverly Hills, 90210. His other notable works include Big Love, Mission: Impossible III, The Last House on the Left, A Long Way Down, and Exodus: Gods and Kings as well.

Paul is married to director and actress Lauren Parsekian. The couple tied the knot in 2013 and is blessed with a daughter; Story Annabelle Paul. The family of three currently resides in Boise, Idaho.

Aaron Paul was born on August 27, 1979, in Emmett, Idaho, USA. He is the son of Darla and Robert Sturtevant, a retired Baptist minister. He was born prematurely on the bathroom floor while his mother was home alone and his father was out of town. He holds American nationality and regarding his ethnicity; he has a mixed ethnical background as he is from English, German, and Scottish ancestry.

Paul is from a closely knit family and has four older siblings. Growing up in a very small town of Emmett, he became a member of several church programs and started practicing acting, performing in a number of theatrical plays.

Paul graduated from Centennial High School in Boise, Idaho, in 1998. He was consumed with the acting bug at a young age and decided to become an actor while he was in eighth grade. At the time, he enrolled in the theatre department of his school to pursue an acting career.

After his high school, 17-year-old Aaron Paul moved to Los Angeles '1982 Toyota Corolla along with mother, with only $6,000 in the pocket. He began working as movie theater usher at Universal Studios for a while.

Aaron Paul has struggled a lot to achieve his current status. He did several minor jobs for about a decade after moving to Los Angeles. Paul went on to compete in the International Modeling and Talent Association competition, in which he ended up being a runner-up.

Aaron Paul made his silver screen debut playing the minor role in a 2000 American teen comedy film Whatever It Takes. His other early movie credits include Help! I'm a Fish, K-PAX, National Lampoon's Van Wilder, Bad Girls From Valley High, Choking Man, Mission: Impossible III, and The Last House on the Left.

Paul made his biggest breakthrough after portraying Tobey Marshall in a 2014 3D action thriller  Need for Speed. Though the movie gained negative reviews from critics, it grossed a tremendous box office collection of $203 million-it was made on budget of $66 million. In 2018, he is all set to rule the industry with his two most anticipated movies The Burning Woman and The Parts You Lose.

Some of his other successful movies are listed below.

In the next few years, Paul played short characters in several other TV shows like Melrose Place, The X-Files, Judging Amy, Point Pleasant, and CSI: Miami. Paul was still a part of Big Love when he got the character of the crystal meth dealer Jesse Pinkman on the AMC crime drama series Breaking Bad.

Aaron Paul's work on the show earned him both praise and notoriety for which he won Emmy Award, in 2010, 2012, and 2014. He also picked up five Emmy Awards nominations. Since 2014, Paul is playing Todd Chavez, in an adult animated comedy-drama series BoJack Horseman and as Eddie Lane in the drama web TV series The Path since 2016. In 2017, he appeared as Gamer691 in Black Mirror.

Some of his hit TV series are:

According to Celebrity Net Worth, Aaron Paul has an estimated net worth of around $16 million-He was paid $150k per episode of Breaking Bad.

Paul currently lives in a palatial, two-bedroom house in the bustling city of Boise, Idaho. He has listed the home on Airbnb for the travelers who want to stay for a night-Charge per night is around $400.

Paul was a part of several commercially successful movies, and some of them are listed below:

Breaking Bad star Aaron Paul is married to his longtime girlfriend doc u mentary director Lauren Parsekian since 2013. The couple tied the knot in a 1920s Parisian carnival-themed wedding, in Malibu, California.  He was previously in a relationship with Jessica Lowndes and Tamara Feldman.

Paul first met his now-wife Lauren Parsekian at the Coachella Valley Music and Arts Festival, in late 2011. They eventually started dating and got engaged in Paris on January 1, 2012. The pair announced that they were expecting their first child in September 2017. Their daughter Story Annabelle Paul was born on February 6, 2018. The family of three resides in Boise, Idaho.

To commemorate the last day of filming Breaking Bad, Paul and his co-star and one of the closest friends Bryan Cranston got the name of the show tattooed.

Here is an interview with Aaron Paul on The Late Show with Stephen Colbert where he talks about the struggles he had to face before landing his role on Breaking Bad.