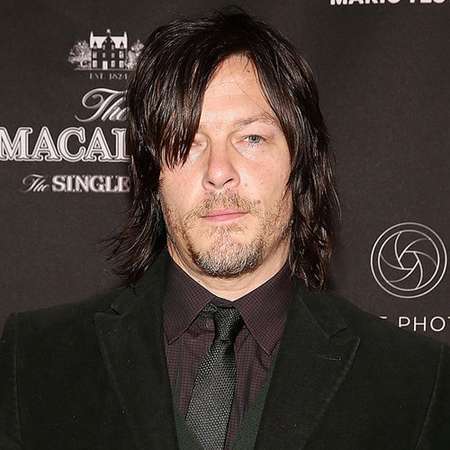 The Walking Dead star Norman Reedus is one of the famous Hollywood actors. He is famous for portraying Daryl Dixon in a horror drama series The Walking Dead. He has appeared in numerous films and television series.

Reedus has also modeled for various fashion designers including Prada. The EWwy award nominated actor started his acting career in 1997 with his debut film Mimic. He later played in various films, TV shows and music videos. Since 2010, he has been appearing in a TV series The Walking Dead.

Norman Reedus was born as Norman Mark Reedus on 6 January 1969 in Hollywood, Florida, United States. He was born to Marianne Reedus and Norman Reedus. He spent most of his childhood in Los Angeles with his sister Leslie Reedus.

He is of American nationality. He comes from mix descent; English, Scottish, and Irish descendent. He has lived in countries like Japan, Spain and Ireland.

Norman first began working at a Harley-Davidson shop based in Venice, California. He then also contributed as a photographer, painter, sculptor as well as a video artist while he was still there. Norman made his film debut in 1997’s Floating as character Van.

Since then he has been seen in many movies like Mimic, I’m Losing You, Dark Harbor, Let the Devil Wear Black, 8MM, The Boondock Saints, Luster, Blade II, Overnight, Antibodies, The Notorious Bettie Page, American Gangster, Messengers 2 The Scarecrow.

Additionally, he has been seen in The Conspirator, The Boondock Saints II: All Saints Day, Hello Herman, Sunlight Jr., Stretch, and Iron Man: Rise of Technol as Frank Castle. He will soon be seen in 20196’s Triple 9 as Russel Welch.

Norman made his television debut in 2003’s Charmed as Nate Parks. Since then he has been seen in Hawai Five-0, American Dad and more.

He was cast as character Daryl Dixon in the popular TV series The Walking Dead in 2010. For his efforts, Norman has received many awards like IGN Award, Satellite Award, EWwy Award nomination, Saturn Award nomination.

Reedus has films have grossed over $1 billion at the Box Office. He lives in a $3.8 million lavish home in Little Chitaly PH. His some of successful films’ Box Office collection are as follows.

Norman Reedus is an unmarried man. He is currently dating actress Diane Kruger. The couple met on the sets of Sky in 2014. Since then their dating rumor sparked and after one year they confirmed their relationship.

Reedus and Kruger kept secret their affair under wrapped for sometimes but in mid-2016, the couple was seen kissing in New York City.  Before meeting Reedus, Kruger was dating Canadian actor Joshua Jackson with whom she broke up in July 2016.

Reedus previously lived together with supermodel Helena Christensen for several years. The former couple lived together from 1989-2003. They also welcomed a child, son named Mingus Lucien Reedus together on October 13, 1999.

But, they still share custody of their son together. Even after their separation, they have remained friends.

Norman does not have a long dating history. He is not seen with many women in the public. Norman is mostly focused on his career thus is reluctant on speaking about his person; life in front of the public.

The couple had an affair but never got married. They did plan to have children. Thus on October 13th, 1999, the couple had their first child named Mingus Lucien Reedus.

Reedus and Christensen have taken a joint custody of their son. There were rumors that Reedus proposed to Helena and that they got married but it never was true. Norman is currently single; does not have a spouse and is not planning to date for a while.

Norman stands tall at the height of 5 feet 10 inches and has a masculine figure. His body, as well as long hair, grabs the attention of many of his audience. His net worth is estimated to be a total of $4 million which shows his huge salary. Eddie is a well-established actor who is garnering success with his every step.