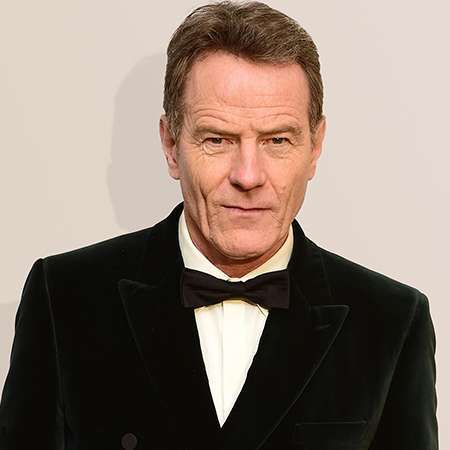 Academy Award-nominated American legendary actor, Bryan Cranston is also a producer and a director who is widely recognized for his role Walter White on AMC's crime drama TV series, Breaking Bad, as Hal on Fox's sitcom, Malcolm in the Middle, and as Tim Whatley on the NBC's sitcom, Seinfeld. Active in the industry for decades has worked in numerous movies and TV series from where he earns an eye-catching net worth and salary. Moreover, his performance helped him to get nominated for several prestigious awards and won some of them as well.

Regarding his personal life, Cranston is married twice. After the divorce from his first wife, he married Robin Dearden, an actress with whom he shares a daughter.

Bryan Cranston was born Bryan Lee Cranston in the year 1956 March 7 at Canoga Park, California under the birth sign Pisces. Cranston is American as per nationality and belongs to Austrian, German and Irish ancestry.

He was born to the parents, a radio actress Audrey Peggy Sell and an actor& an amateur boxer Joseph Louis Cranston. His parents raised her with his siblings, a brother Kyle EdwaCranstonton and a sister Amy Cranston.

Regarding his academics, Cranston attended Canoga Park High School where he was the member of school's chemistry club. In 1976, he graduated from Los Angeles Valley College in an a s sociate degree in police science. After graduating, he began his acting career from a local and regional theatre starting at Granada Theatre in San Fernando Valley.

Bryan Cranston in full, Bryan Lee Cranston is a famous Hollywood entertainer who works as an actor, voice actor, screenwriter, director and producer in Hollywood movies. He is best known for his acting skill for the role of Dr. Tim Whatley in the NBC series Seinfeld aired from the year 1994-1997, Hal in the comedy series of Fox, Malcolm in the Middle that was broadcasted from 2000 to 2006 and as Walter White in the AMC crime drama series Breaking Bad from the year 2008-2013. The series, Breaking Bad starred Aaron Paul, Anna Gunn, and RJ Mitte.

For his performance on the drama series Breaking Bad, he has won the Emmy Awards for Outstanding Lead Actor in a Drama Series. Besides being an actor for the series, he became one of the producers of the series in the year 2011 for which he won the award for Outstanding Drama Series twice.

For his performances in several of the series and movies, he has been nominated and has won several of the prestigious awards. Some of his achievements are Breckenridge Festival of Film Best of the Fest in 1999 and Valley Film Festival Audience award in 2000 for the movie Last Chance, Emmy Awards, PRISM Awards, TCA Awards, Satellite Awards, Saturn Awards, etc with several other of the nominations. He also was nominated for the Golden Globe Awards for the five times which he won one in 2014.

And his one of the most recent award achievement is Tony Award for Best Actor in a Play where the portrayal of Lyndon B. Johnson in the play All the Way. He has appeared in several of the critically acclaimed films such as Saving Pirate Ryan 1998, Little Miss Sunshine 2006, Drive 2011, Argo 2012 and Godzilla 2014.

Cranston had given his voice in the English dubbing of Japanese anime as Lee Stone in Royal Space Force: The Wings of Honneamise, Macross Plus, and Armitage III: Poly Matrix. He worked in several of the soap operas as well as different adverts. He then began to appear in television drama series and thus his popularity rose.

Bryan Cranston has been nominated for several prestigious awards and won some of them. Some of his won awards include:

Bryan Cranston's current net worth is $ 30 million according to Celebrity Net Worth and The Richest. Cranston has worked in numbers of movies that made an impressive collection at the box office.

Moreover, he earns an average salary of $225 thousand per episode from his TV series. The legendary actor owns a beach house in Ventura County, California designed by him and is a co-owner of the independent theatre Cinemas Palme d’Or in Palm Desert, California. He has a collection of luxury cars including:

Besides, Cranston is also involved in several charitable works. In 2015, he along with Idina Menzel, Denzel Washington, and Fran Drescher presented at Broadway Cares/Equity Fights AIDS Easter Bonnet Competition where they rose donations.

Bryan Cranston is a married man. He was previously married to Mickey Middleton in 1977 but the marriage did not last for long ending in the year 1982. When his age was 33, he married Robin Dearden whom he met at the set of the show Airwolf in the year 1984. The couple has a daughter named Taylor Deardon Cranston born in 1993.

His wife, Dearden is a theatre student at the University of Southern California and has also appeared in an episode of Breaking Bad. It was not loved at first sight but the couple gradually attracted to each other. Eventually, they started their affair and finally tied the knot.

The couple came to controversy after they were found having sex in the car while traveling from Switzerland to Italy.

Check out the facts about Bryan Cranston: