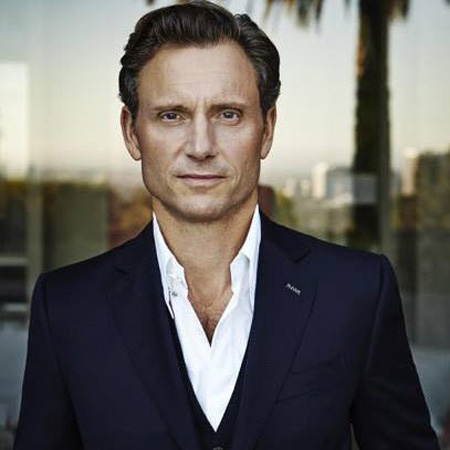 Tony Goldwyn is an American actor, director, producer and a political analyst. He is most recognized for his portrayal of Fitzgerald Grant III, president of the U.S. in ABC drama Scandal. Goldwyn is also the voice of title character in the Disney movie Tarzan.

Tony attended Hamilton College in New York, and he received his Bachelor of Fine Arts degree from Brandies  University in Waltham. Goldwyn also attended the London Academy of Music and Dramatic Arts.

Tony Goldwyn belongs to White ethnicity, he is also of Polish and Jewish descent from his paternal grandparents' side, he holds an American nationality.

Following his departure from drama school, Tiny began acting in guest star roles in the mid-1980s. He is very well known for his portrayal of Carl Bruner, a friend turned-betrayer to Patrick Swayze's character Sa Wheat in the movie Ghost.

Tom Goldwyn has also voiced the title character from the 1999 animated feature film Tarzan produced by Walt Disney Feature Animation and reprised the role in the video games Disney's Tarzan Untamed and Kingdom Hearts. Goldwyn also appeared as the recurring character Frank Goren on NBC-Universal drama Law &Order: Criminal Intent. He tried his hand at directing along with acting for the first season of Dexter.

Goldwyn appeared as a stage actor twice in Off-Broadway shows at Second Stage Theatre, he appeared in Theresa Rebeck's Spike Heels in 1992 along with Kevin Bacon and Julie White. His next show Off-Broadway was in 2006, The Water's Edge alongside Kate Burton. He also did Broadway shows at Circle in the Square Theatre, Promises starring Sean Hayes and Kristin Chenoweth.

Tony also played Captain von Trapp in a concert performance of The Sound of Music at Carnegie Hall on 25 April 2012. The benefit also included opera singer Stephaine Blythe as the Mother Abbess, Brooke Shields as Baroness Schraeder and Patrick Page as Max.

In 2013, Tony was cast in a new Lifetime movie, Outlaw Prophet, as Warren Jeffs. In 2014, he appeared in Divergent as Andrew Prior, Caleb and Beatrice's father. In 2015, Goldwyn signed on to star in James Gunn's horror thriller film The Belko Experiment.

Tony Goldwyn's current project is ABC TV series Scandal he's starred in as one of the leads, president  Fitzgerald, alongside Kerry Washington, since 2012.

Tony Goldwyn is a married man. He is married to production designer Jane Michelle Musky, the couple got married in 1987. Since then they have two children named Anna Musky Tess and Frances Goldwyn. There were rumors of Goldwyn dating his co-star Huma Abedin when he was seen frolicking around with her and her child at Disneyland in March 2017, however, his wife, Jane Musky, laughed it off saying they're all just good friends.

Tony Goldwyn's net worth is estimated to be $4 million. He is both an actor and a director, thus, he earns a decent amount of money from both his profession. Goldwyn is the lead on the ongoing ABC drama series Scandal and has also directed 69 of the episodes so far. His co-star and the lead on Scandal, Kerry Washington, reportedly brings in $80,000 per episode, the series is in its 6th season as of 2017, Goldwyn's salary is most possibly around the same figure as well.