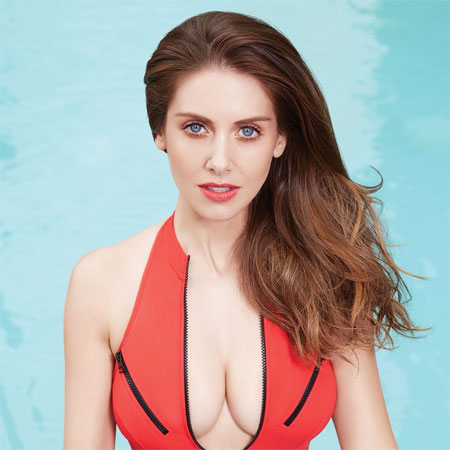 American actress, Alison Brie is known for portraying Annie Edison on the NBC sitcom Community and Trudy Campbell on the AMC drama Mad Men. She is also well known for her role in Netflix's web series, GLOW.

Her performance helped her to win Screen Actors Guild Awards. Moreover, she has been also nominated for Critics' Choice Television Awards, and Satellite Awards.

Alison Brie is a married man who tied the knot to her boyfriend, Dave Franco.

Brie is the daughter of Charles Terry Schermerhorn and Jonanne Brenner. Her mother Joanne works at a non-profit child care agency called Para Los Ninos ("For the Children"), and her father, Charles is a musician and freelance entertainment reporter.

When Brie was young, her parents got divorced. Her divorced parents raised her with her older sister, Lauren Schermerhorn. From an early age, she was interested in acting at an early age, she began her career performing in community theater shows at the Jewish Community Center in Los Feliz.

Brie graduated from the California Institute of the Arts with a bachelor's in theater in 2005. At a time, she studied at Glasgow's Royal Scottish Academy of Music and Drama. She also worked as a clown at birthday parties.

Alison Brie made her Hollywood debut in 2004 as Alice in the short film, Stolen Poem. Brie then appeared in several movies like Born, Parasomnia, The Coverup, Us One Night, and Montana Amazon.

In 2011, Brie appeared in her first major role in a slasher film, Scream 4 as a publicist, Rebecca Walters. The following year, she starred in Michael Mohan's movie, Save the Date with Lizzy Caplan, Martin Starr, and Mark Webber. As of 2018, she voiced Princess Unikitty in the upcoming 3D movie, The Lego Movie 2: The Second Part.

One of Brie's first television roles was Nina, a novice hairdresser, on Hannah Montana. The series starred Miley Cyrus, Emily Osment, and Jason Earles. She then earned the recurring role as Peter Campbell's wife, Trudy Campbell in AMC's period drama TV series, Mad Men. She shared the screen with Jon Hamm, Christina Hendricks, and January Jones. Her performance in the series helped her to win Screen Actors Guild Awards.

In 2009, Brie worked in one of her most famous roles as a Jewish student,  Annie Edison in NBC's comedy TV series, Community. The series starred Joel McHale, Gillian Jacobs, and Danny Pudi. She has been nominated for the Critics' Choice Television Awards for her performance.

Besides, She co-hosted an episode of Attack of the Show and appeared in a short segment on Web Soup in April 2010.

According to Celebrity Net Worth, Alison Brie has an estimated net worth of $10 million whereas her net worth is estimated to be $5 million as per The Richest. Brie worked in several movies that made an amazing collection at the box office. Here is the list of her hit movies:

Alison Brie is a married woman who tied the knot to actor Dave Franco. The couple started dating secretly. The duo was spotted for the first time in public as a couple when they went grocery shopping. Later, it was revealed that the couple already dated for five or six months.

Though their relationship is made public, they prefer to keep their private life far from the media and audiences. The couple never spoke about their engagement but the beautiful rose-cut diamond ring on Brie's finger told everything.

In 2017, Franco gave a hit about their wedding. On 13th March 2017, Franco married his girlfriend Brie in a private ceremony. The husband and wife couple did not want to share the detail about their marriage.

The couple is together for years without any rumors about their divorce and extramarital affairs. Moreover, she was linked to Danny Pudi.