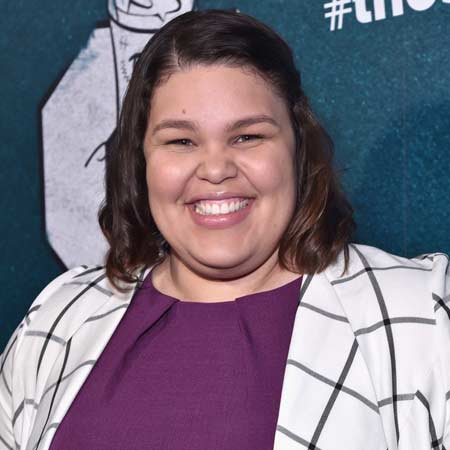 American actress Britney Young rose to limelight after starring in the Netflix’s web TV series GLOW. She made her Hollywood debut in 2016 in the series, Crazy Ex-Girlfriend. Some of her other works include Better Things and Those Who Can't. Before pursuing her acting career, she used to work as a production assistant.

Britney Young was born on 1st June 1988 in Japan, Tokyo under the birth sign Gemini. Her African-American father and white mother raised her in Eagle River, Alaska.

#tbt to my first birthday. As my 30th is hours away I look back at this picture and realize that after 29 years, that smile and joy for life has never faded. Thank you to everyone and everything that has made this life like it’s my birthday everyday!! #happybirthday #80sbaby #halfrican

Young attended West Tokyo Preschool where she learned music. During that time, she was a fan of Raven-Symone and wanted to be like her. She left music after joining high school and started to get involved in sports. During her high school, she used to be a cheerleader and a class president.

Later, Young earned a bachelor’s degree from the USC School of Cinematic Arts in LA with $6k debt due to which she needed to make money. She got her first job as a production assistant for the movie Big Miracle starring Drew Barrymore, John Krasinski, and Kristen Bell.  The team gave her the job only because of her film degree.

After a few years, Young worked as a showrunner’s assistant on The Mentalist, telling the directors who the producers had chosen for the roles. Slowly, she discovered her passion for acting and later took acting classes to improve her acting skills. In the beginning, Young gave several auditions but was rejected. She, however, did not lose hope and followed her passion.

Britney Young made her Hollywood career in 2016 in a romantic musical comedy-drama TV series Crazy Ex-Girlfriend in a small role. The series starred Rachel Bloom, Vincent Rodriguez III, Donna Lynne Champlin, and Pete Gardner. The same year, she worked in two drama series Better Things and Those Who Can’t.

In 2017, Young appeared as Carmen ‘’Machu Picchu’’ Wade in Netflix’s comedy web TV series, GLOW along with Alison Brie, Betty Gilpin, Marc Maron, and Kate Nash among others. She received training from a professional wrestler Chavo Guerrero Jr. for her role in the series.

Both fans and critics have highly appreciated her performance.

Britney Young has an estimated net worth of thousand dollars, but the amount is not made official yet. Young makes money from her acting career. Her 2017’s TV series, GLOW is gaining huge popularity from where she is earning an impressive amount.

According to some sources, a TV star averagely makes a salary ranges between $150k to $1 million.

GLOW star, Britney Young has a hand full of work. She is hardworking and ambitious which might be the reason for giving priority to her works rather than involving in any serious relationships. As of 2018, Young might be single.

‘’We want to celebrate women of all shapes, all sizes, all colors. It’s a goal of ours to show people from all walks of life and make everyone feel included. I think that’s something we need to do a better job of in Hollywood, and I’m glad to be on a show that is doing that.’’

She is comfortable with her body size and confidently flaunts them.