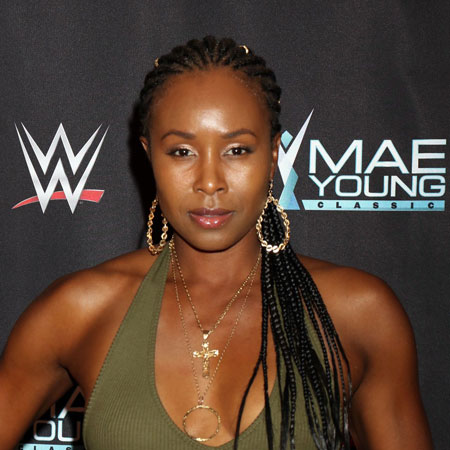 Sydelle Noel is a former American athlete, currently an actress. She is well known for her appearance as Cherry Bang in the television series GLOW. She is also well recognized for her portrayal as Xoliswa in the recent movie Black Panther.

She began her career as a runner but due to her leg injury she had to quit and rolled into sports modeling before she began acting in 2004.

Sydelle Noel was born on 16 July 1985, in Los Angeles, California, United States. She is of Afro-American ethnicity and holds American nationality. Noel's father died when she was only nine.

She grew up with her mother and brother Reuben Granger. She attended the University of Georgia on a track scholarship and achieved a degree in Sports Management with an emphasis on Business. Noel's professional career went well for few years and ended due to a stress fracture.

In 2004, Sydelle Noel moved to California and began her career as a sports model, before rolling into acting. Currently, she is most noted starts of the Netflix's GLOW, a new comedy series along with the star like Alison Brie.

This was her first big project, followed by her recent role in the movie Black Panther. Since her appearance in non-speaking roles in commercials, Noel received her first speaking role in an episode of Private Practice in 2007.

Sydelle Noel earns a good amount of money from her successful career as an actress. She has made her appearance in various movies and television series. As of 2018, Noel's total net worth is estimated to be $1 million.

Sydelle Noel seems to be single. Till date, Noel has not been spotted with anyone special. She is happy spending time with her family.

When you fly home to surprise your #Mom and #Brother for their #Birthday We cool AF. Nothing like a family bond. #BloodisThickerThanWater #Aquarius #Pisces #February