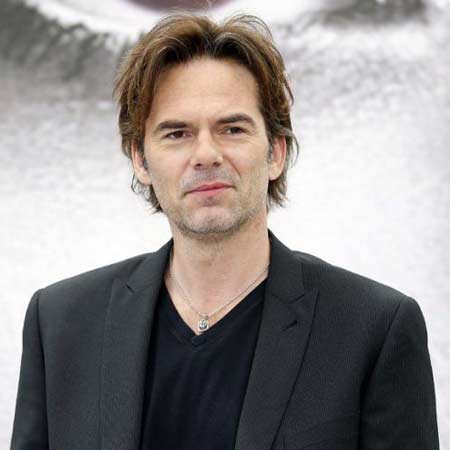 American versatile actor, Billy Burke is well recognized for his role, Chris Swan (father of Bella) in fantasy movie Twilight and its franchise. He is also known for his role, Cesaire in romantic horror film Red Riding Hood. Some of his motion pictures credit Ladder 49, Fracture, Along Came a Spider. Moving towards the TV, Burke started his TV career in 1994 in an episode of Party Five. He is famously known for his roles in TV series like Revolution, Major Crimes, and Zoo. His performance in the series Revolution helped him earn Saturn Award nomination.

Don’t know who this kid is but he seems to be pretty pleased with himself. Perhaps he knows that his present hair do won’t look nearly as bad in comparison to those of his future self.
Thank u everyone everywhere for the lovely birthday greetings and wishes. -bb pic.twitter.com/4SgSqwFwM9

Burke started singing from the early age of nine and joined the band at the age of 15. He himself learned to play guitar and piano. As a musician, he performed in Seattle at the Annex Theater, the A.H.A Theater and New City Festival among others. The band recorded four songs with Phil Ramone with Warner Brothers Records.

Billy Burke made his Hollywood debut in 1990 as Dante of the Three D’s in the movie Daredreamer. The following year, Burke appeared as James Bird in To Cross the Rubicon. In 1998, he appeared in a lead role in horror TV film, Don’t Look Down starring, Megan Ward.

Back to back, Burke worked in several movies like Without Limits, Mafia!, After Image, Feast of Live, Three Days to Vegas, and HBO First Look among others. Particularly, he is famous for his role in Twilight and its franchise:

Burke’s breakthrough came in 2008 from the romantic fantasy film, Twilight which is based on Stephenie Meyer’s novel of the same name. In the movie, he played the character, Charlie Shaw, who is the father of Bella (Kristen Stewart) and a Forks’ Chief of Police.

Burke is also well known for his role, Cesaire in the romance horror film, Red Riding Hood produced by Leonardo DiCaprio. The movie starred Amada Seyfried, Megan Charpentier, and Virginia Madsen. As of 2018, he worked as Eddie in James McTeigue’s movie Breaking In.

Burke made his TV debut as Guy in Club in an episode of Party of Five in 1994 and subsequently worked in Star Trek: Deep Space Nine. He then worked in a small role in several TV series like Marshal Law, Wonderland, 24, Gilmore Girls, Law & Order, My Boys, The Closer and Major Crimes.

His role in the series Revolution helped him to get nominated for Saturn Award in the category of Best Actor. Besides, Burke also worked as a producer and writer.

As per Celebrity Net Worth and The Richest, Billy Burke has an estimated net worth of $ 5 million. Burke’s major source of income is his acting career. He worked in several high box office collection movies.

The versatile actor, Billy Burke, is a married man who tied the knot to his longtime girlfriend, Pollyanna Ross on 15th June 2008 in a private ceremony in the presence of their friends and families. His wife was previously married to British actor, Max Brown.

The couple shares a baby named, Bluesy LaRue Burke who was born in 2008.

CAPTION: Billy Burke with his wife and child. SOURCE: Zimbio

The couple is still together without any divorce rumors. The pair attends several events and functions together.

Prior, Burke was in a relationship with beautiful Canadian actress, Neve Campbell, current wife of JJ Field from 2002 to 2004. The couple separated for some unrevealed reasons.

Here is the video which shows Billy Burke's bio: