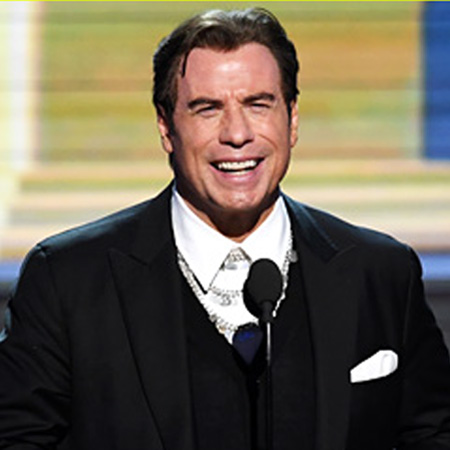 John Travolta, an American actor, dancer, producer, and singer, is best known for his role of Vincent Vega in the 1994's film Pulp Fiction. He debuted his career appearing on the television series named Welcome Back, Kotter, he has featured in the box office successes like Saturday Night Fever and Grease. He has amassed several accolades in his career. His net worth is $170 million at present.

He has been married to an American actress, Kelly Preston since 1991, and has three children.

John Travolta was born as John Joseph Travolta on 18th February 1954 in Englewood, New Jersey, the U.S. He belongs to the mixed ethnicity/race and holds an American nationality. His father was a second-generation Italian American & his mother was Irish American

Travolta is the youngest child of Salvatore Travolta, a semi-professional American football player & partner in a tire company and Helen Cecilia, an actress & singer.

His mother has appeared in a radio vocal group, The Sunshine Sisters, and also acted & directed before becoming a high school drama & English teacher.

Travolta attended the Dwight Morrow High School but dropped out as a junior at age 17 in 1971.

Travolta started his career in 1971. He moved across the Hudson River to New York City after dropping out from the high school. There he landed a role in the touring musical company called Grease.

Travolta played the role as Vinnie Barbarino in the TV comedy sitcom, Welcome Back, Kotter. The show aired on ABC in 1975.

In 1983, Travolta faced a series of financial and critical failures that sidelined his career. His failures included Perfect and Two of a Kind.

Travolta rose to success after starring in the hit movie, Look Who's Talking. The movie grossed $297 million making it his most successful movie after Grease. He later continued to the sequels of the movie. He also portrayed Vincent Vega in Quentin Tarantino's hit film Pulp Fiction.

John Travolta's Net Worth And Salary

John Travolta's net worth is $170 million at present. He has also worked as a pilot with numerous certifications & experience. He has earned a decent amount of salary from his successful acting career.

His movie, Pulp Fiction grossed $213 million worldwide. His most of the films collected over $1 million at the Box Office.

In 2014, they bought a house in Florida for $35 million. John Travolta is also a certified private pilot who owns five aircraft. He drives lavish cars of several brands.

He received the IIFA Award for Outstanding Achievement in International Cinema in 2010. He received his first Primetime Emmy Award in 2016, as a producer of the first season of the anthology series American Crime Story, subtitled The People v. O. J. Simpson.

Travolta is married and has three children. He currently resides in Jumbolair subdivision, Ocala, Florida with his wife and children.

Travolta was in a relationship with an American stage, film & television actress, Diana Hyland. He met Diana while filming American television drama film, The Boy in the Plastic Bubble. However, she died due to breast cancer and underwent a mastectomy.

Travolta married Kelly Preston, an American actress, and former model. They tied the knot in 1991, after an affair for several years. The couple has bought a house in Islesboro, Maine. The relationship between the couple is good and there is no sign of divorce.

Travolta's son, Jett, died at age 16 while on a Christmas vacation in the Bahamas. His son suffered from Kawasaki disease at the age of two. He established a non-profit organization named Jett Travolta Foundation in the memory of his son.