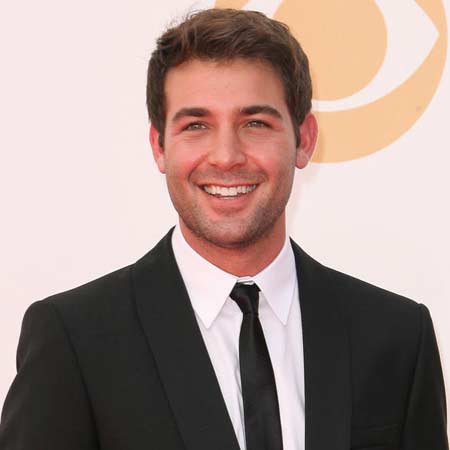 James Wolk is a talented American actor who is mostly known for his role, Jackson Oz, a zoologist in the drama series, Zoo. Wolk who performed as a copywriter, Zach Cropper, in the CBS sitcom, The Crazy One was also a part of the 2012 comedy film, For a Good Time, Call…

Wolk is married to Elizabeth Jae Lynch. The couple who tied the knot in 2015 shares a son, Charlie Wolk born in 2017.

James Wolk was born to Edie Wolk (an art teacher) and Robert Wolk (a shoe store owner) on 22nd March 1985 in Farmington Hills, Michigan. His birth sign is Aries. His parents raised him Reform Judaism with his sibling, Kate Ray Wolk.

Throwback to the time when I was a complete momma's boy. #tbt #family #Wolks #michigan

In 2003, Wolk finished his schooling from North Farmington High School. During his teenage, he used to work in his father's store and also worked as an emcee at Bar and Bat Mitzvahs. Moreover, in 2007, he graduated from the University of Michigan School of Music, Theater & Dance.

James Wolk started his Hollywood journey in 2006 from the movie, The Spiral Project. He then worked in short movies like Forgotten Land and 8 Easy Steps. In 2012, he played the character of Lauren Powell (Lauren Miller)'s ex-boyfriend in the comedy film, For a Good Time, Call...

The movie starred Ari Graynor, Lauren Miller, Justin Long and Seth Rogen. His acting in the movie was highly appreciated by the number of audiences and critics.

Some of his other works are The Standford Prison Experiment, This Is Happening and Mercy.

Wolk started his TV career in 2008 as Brad Cohen in the TV film, Front of the Class starring, Patricia Heaton, and Treat Williams. Subsequently, he worked in another TV film Solving Charlie. He earned his first lead role in 2010 in Fox's TV series, Lone Star as Robert Allen who is a Texan con-man living a secret double life. He shared the screen with Adriana Palicki, Bryce Johnson, and David Keth.

Some of his other popular TV series include:

In the series, Zoo, Wolk played the main character Jackson Oz, a zoologist.

James Wolk’s Net Worth And Charity

James Wolk has an estimated net worth of $2 million. His major source of income is his acting career. According to some online sources, a TV star makes a salary ranges between $150k to $1 million.

Wolk is one of the BOD of the Brad Cohen Tourette Foundation. He also volunteers at '' Camp Twitch and Shouts,'' a camp for children between 7-17 ages with Tourette syndrome in Georgia.

Wolk is a married man who tied the knot to his longtime girlfriend Elizabeth Jae Lynch in June 2015 at Crossroads Estate, Firestone Winery in Los Olivos California.

Happy Valentine's Day to my beautiful valentine and love of my life. #valentine

In 2016, the couple announced that they were expecting their first child. Wolk posted several pictures with his wife and the baby bump. On 1st February 2017, they welcomed their son Charlie Wolk to the world.

Here is the video where James Wolk talks about the delivery of his child: