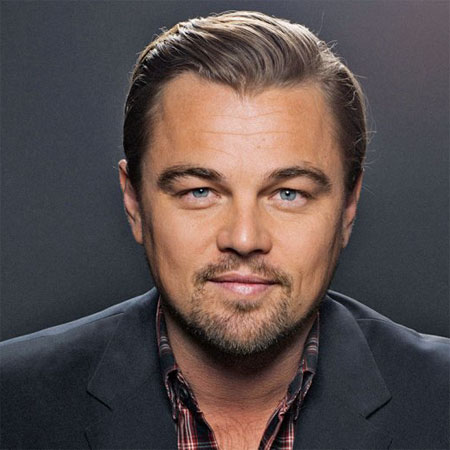 Leonardo DiCaprio is well recognized as an American actor. The Oscar-winning actor is one the most prominent faces in the world of Hollywood. He is known for the movies such as 'Titanic,' 'The Aviator,' 'The Wolf of Wall Street' and 'The Revenant' contributing in the movie industry since 1989. DiCaprio has also established his foundation named Leonardo DiCaprio Foundation, a non-profit organization devoted to promoting environmental awareness.

Leonardo got his start in Hollywood by appearing in a smattering of commercials and television roles as a child. His biggest early role was on the last season of Growing Pains. DiCaprio then landed the lead role in the biopic This Boy's Life and received much critical praise for this performance.

Leonardo DiCaprio was born on November 11, 1974, to Irmelin- a legal secretary, and George DiCaprio, an underground comic artist, producer, and distributor of comic books.

He is American and is of Caucasian ethnicity as his father belonged to Italian and mother of German descent. He was named Leonardo because he kicked for the first time when his pregnant mother was looking at Leonardo da Vinci painting in the Uffizi museum in Florence.

He mostly spent most of his childhood with his mother as his parents separated when he was one. They resided in many Los Angeles neighborhoods, such as Echo Park and Los Feliz as her mother was looking for jobs.

Leonardo DiCaprio’s acting career started after he appeared in some commercials and educational films. He was taken off from the set of children's television series Romper Room for being troublesome at the age of five. Later, he followed the footprints of his stepbrother Adam Farrar into television advertisement and landed a chance to appear in Matchbox cars when he was just 14.

After doing some commercials and ad films, he got his break on television after he was offered a role in the short-lived series based on the movie Parenthood. He further got to do some more shows such as The New Lassie, Roseanne, and the soap opera show Santa Barbara.

DiCaprio broke through in Hollywood from the sci-fi horror film Critters 3, in which he played the stepson of an evil landlord. Soon after that, he appeared on the ABC sitcom Growing Pains.

He was chosen out of 400 young actors to play the lead role in This Boy's Life by Robert De Niro in 1992. A year later, he got to play the role of a mentally disabled brother of Johnny Depp in What's Eating Gilbert Grape for which he got awarded with the National Board of Review Award and was also nominated for both an Academy Award and a Golden Globe.

After being recognized for his roles in Sam Raimi's The Quick and the Dead and Total Eclipse he stepped into the mainstream Hollywood appearing in an abridged modernization of William Shakespeare's romantic tragedy Romeo + Juliet in 1996.

A year later, in 1997 he appeared in the James Cameron's Titanic (1997) which made him popular worldwide and his character Jack is still loved by millions of people.

After the release of Titanic, his face appeared on n the covers of four Teen magazines. Also, three books about him were among the top six paperbacks on The New York Times Best Seller list. Also, over 200 fans protested, him not being nominated for the 70th Academy Awards.

Though his career slumped after his films The Man in the Iron Mask (1998) and The Beach (2000), DiCaprio bounced back again in 2002 after appearing in Steven Spielberg's Catch Me if You Can and Gangs of New York.

Also, his film The Great Gatsby which released in 2013 became a major hit. Though the film received mixed reviews from the critics, DiCaprio’s character as Jay Gatsby was appreciated by everyone. In 2015, he played fur trapper Hugh Glass in the survival drama The Revenant for which he won Oscar Awards for the best actor category (2016) for the first time after being nominated for the 5th time.

Leonardo DiCaprio has an estimated net worth of around $245 million as of 2017. Starting from his hit film Romeo + Juliet, earned $147.5 million worldwide. Also, The Man in the Iron Mask made a collection of $180 million at the box office

His film, Gulf of Thailand made in a budget of around $50 million became a huge success grossing $144 million.

Further, in 2010 his psychological thriller film Shutter Island (2010) grossed $294 million. His another biggest hit was Inception which grossed over $825 million worldwide. To star in that film, DiCaprio agreed to pay cut from his $20 million fees to get the rights to receive money directly from the top of ticket sales. Indeed it was the right decision as he made $50 million from it.

DiCaprio has also starred in films including J. Edgar, Django Unchained, The Great Gatsby, and The Revenant. DiCaprio's credits as a producer include The Aviator, Orphan, Runner Runner, and The Wolf of Wall Street.

He also listed his four-bedroom home in Studio City that he owned since 2014 and marked the price for $2.4 million.

He owned his first electric hybrid Fisker Karma for $135,000. He also bought Cayenne one of the most expensive luxury midsize SUVs which has a starting price of $10,000 ranging up to $60,000.

Also, his foundation has worked on various projects in 40 countries and has also produced two short web documentaries, Water Planet and Global Warning.

He made a documentary named The 11th Hour which showed the relationship of people with nature and global warming. Also, he organized “11th Hour” fine art auction which nearly raised $40 million.

His foundation donated $15.6 million to help and protect wildlife and the rights of Native Americans and combating climate change. The foundation raised $30 million in a charity auction in July 2017.

DiCaprio’s mother donated $35,000 for a Leonardo DiCaprio Computer Center at the Los Feliz. Also, he gave $1 million to the Wildlife Conservation Society at Russia's tiger summit in November 2010 and $1 million to relief efforts in Haiti after the earthquake.

Also, he donated $61,000 to GLAAD; it is an organization that promotes the image of LGBT people in the media.

He is not only active in protecting the environment but also is interested in politics. He donated $2,300 to Barack Obama's presidential campaign in the 2008 election and $5,000 on his 2012 campaign.

Moreover, he has raised around $60 million through fundraising and has supported some charities including Declare Yourself, Feeding America, Global Cool, Global Green, Natural Resources Defense Council, Pediatric Epilepsy Project and Reef Check Foundation.

As of now, Leonardo DiCaprio has won more than 54 awards for 161 award nominations. Some of his awards include:

Leonardo DiCaprio hit the headlines on September 2017 after he was seen rekindling with his ex-Toni Garrn. They were seen together enjoying dinner at North End Grill located in the heart of Battery Park, New York.

The couple started dating in May 2013 until December 2014. The news about them getting back together is yet to be confirmed.

He was also linked to 25-year-old model Nina Agdal for almost a year. Though they weren’t seen together, it was reported that they dated for more than a year but later separated amicably.

Also, he dated Kelly Rohrbach, a Sports Illustrated model. On June 9, 2015, the couple was seen riding bikes around New York, and they weren't shy showing their affection in public June 9, 2015, but their love didn’t last for long.

He was photographed with married model Katie Cleary at the Cannes Film Festival on May 19, 2014, and got involved in a controversy as Cleary's husband Andrew Stern committed suicide weeks after the photograph was released.

Later, Cleary's lawyers cleared things stating that those photos had nothing to do with his suicide and the couple had already separated at the time the photos were taken.

Leonardo DiCaprio dated Victoria's Secret model Erin Heatherton in 2011. They were in a relationship for more than 10 months but later got separated due to their busy schedule.

Also, it was reported that DiCaprio was in a relationship with Blake Lively in 2011, but their romance couldn’t last more than five months.

He was in a relationship with Bar Rafaeli which is considered to be the longest relationship of his, from2005 to 2011.

Though he has been romantically linked with so many ladies, he is yet to get married, and all his fans are certainly waiting for that day.