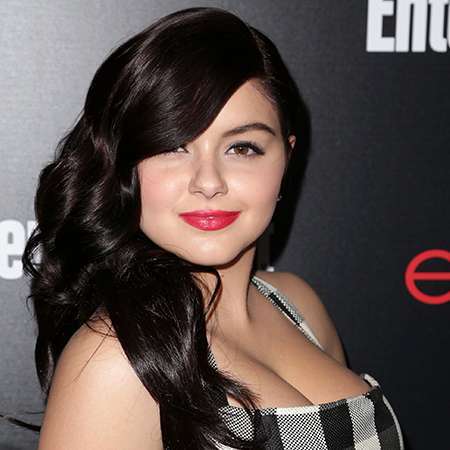 Ariel Winter Workman, popularly known as Aerial Winter in the professional sector, is an American actress, singer and voice actress. She is best recognized for her work in the film One Missed Call (2008) for the role “Ellie Layton” and in Modern Family (2009) for the character “Alex Dunphy.” The TV series along with her had won four Screen Actors Guild Awards for Best Ensemble in a Comedy Series. Ariel Winter has given her voice in many of the animated movies and has acted in several of the TV series. Not only in movies, can we hear her voice in the Video Games as well. And of course, in the famous cartoon icon Dora as well, she has given her voice.

Winter is The daughter of Chrisoula and Glenn Workman. Her mother belongs to a Greek family. She has two sisters, Shanelle Workman and Jimmy Workman who are also the actors and are active in the entertainment industry. Aerial was homeschooled till the age of 14 and later she moved to the private school in LA.

Aerial is living with her sister now as she claimed she was emotionally and physically abused by her mother. In October 2012, her sister filed to become her guardians due to her mother's deeds. Three years later, she declared her officially emancipated. In 2016, she attended the University of California, Los Angeles.

When she is not working as an actress or voice actress, she loves to sing. She has a band with her best friend called “WickedSweet”.

Ariel Winter started acting when she was just the age of six. Ariel always wanted to act. She was a great fan of Dora the Explorer. She used to sit in front of the TV set and used to become as Dora. She got her first break from a commercial called Cool Whip. Afterward, she never had to stop. She got the door to the entertainment world opens wide forever since then. She has been active in this industry since 2005.

Aerial got her first TV appearance at the age of seven in an episode of Listen Up followed by several other TV shows such as Tickle U, Freddie, Mont, etc. She has given her voice in different animated children shows like Phineas and Ferb as Gretchen, Disney Junior’s Jake and the Neverland Pirates, Bambi II, Ice Age: The Meltdown, etc. She has also appeared in feature films like Kiss Kiss Bang Bang, Speed Racer, Duress, etc.

Particularly, Winter is famous for her role in ABC's doc u mentary family sitcom, Modern Family. She is a s sociated in the series since 2009 as Alex Dunphy where she shared the screen with Ed O'Neil, Sofia Vergara, and Julie Bowen. Some of her other popular works include Sofia the First and Mr. Peabody & Sherman.

Besides, Winter won Screen Actors Guild Awards for the fourth times for her role in Modern Family. Moreover, she also won Young Artist Awards in 2010.

Winter worked in several movies from where she earns an impressive amount. Here is the list of her movies that made an amazing collection at the box office:

According to some online sources, the main casts of Modern Family earns the salary around $500k per episode.

Aerial Winter is yet to be married but she is dating talented Canadian actor, Levi Meaden since November 2016. On 26th November 2016, she was spotted enjoying Friendsgiving with her boyfriend. At the end of 2016, they made their red carpet debut as a couple.

The couple then posted several pictures including the kissing pictures on their social media. Moreover, in 2017, Winter posted a picture of them on the occasion of their anniversary where she says that she was the luckiest girl. The couple is together for years but is not married yet.

Previously, Winter had the relationship with Australian actor Callan McAuliffe for a month in 2011 and then with American actor Cameron Palatas in 2012 which did not last for long as well.

She also had an affair with Laurent Claude Gaudette. She was seen taking selfies with her this current boyfriend that is posted on their social sites Instagram and Facebook. She is not married yet.

Apart from her relationships, she has numbers of tattoos on her body as she is a tattoo lover. Besides, Winter is an active environmentalist helping in awareness building campaign related to environment and is active in charities, organizations and different campaigns. She loves to hang out with her three dogs named Pebbles, Hercules and Cher. She has got the purple belt in Taekwondo but she fears of spiders. Her fans can find information on her on different websites including her pictures as well. Being an avid social network user, one can be regularly updated about her activities following her on Twitter, Facebook, and Instagram.

Aerial Winter is a slim build one. She has the height of five feet and four inches having the weight of 57 kg.  Aerial is naturally a blonde but has dyed her hair to dark brown. Her body measures the size of 37-27-33 inches giving her the hourgla s s figure. As of 2018, her age is 20.

Check out the interview with Ariel Winter: