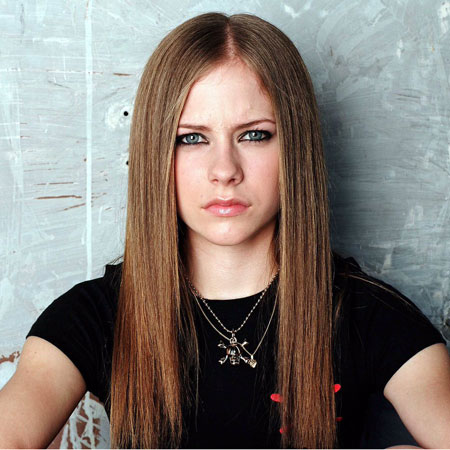 Also known as Punk Queen Avril Lavinge is famous for her rebellious style song mixing punk with the rock. With her tomboy appearance and tough attitude, Avril Lavinge was the teenage sensation in the early 2000s and gained huge popularity among girls and boys.

Her fashion and her singing style influenced the generation and with her debut album "Let Go" (2002)  which was released when she was just eighteen was certified Platinum.  Though her father was French immigrant she was born in Canada and started singing at a young age.  In total, she has released five studio albums Let Go(2002),  Under My Skin(2004), The Best Damn Thing(2007), Goodbye Lullaby (2011)and self-titled Avril Lavinge(2013).

Besides her successful music career, she has also featured in various television series and movie. In 2015, she was diagnosed with Lyme disease but good news to all her fans, she is recovering fast.

Avril Ramona Lavinge was born on September 27, 1984, Belleville, Ontario Canada to father Jean Claude Joeseph Lavinge and mother Judith Rosanne Loshaw. She also has a brother named Mathew and sister named Michelle. She is Canadian as per nationality and holds French citizenship too due to her father who is French.

Lavinge attended Napanee District Secondary School in Ontario but eventually dropped out of school to focus on her dream i.e. music career.

What Is Avril doing as of now? Find out in the video given below:

In her early age, Avril Lavinge idolized Shania Twain, Gareth Brooks, and Dixie Chicks. At the age of 14, she began to write her own songs and one of her very first song titled "Can't stop thinking about you" was about her teenage crush.

From 1999 Lavinge started her professional singing career. The same year, she also won a radio contest to perform with singer Shania Twain in Ottawa. They both collaborated together on the song "What made you say that".

Avril Lavinge's breakthrough came in 2002 after the release of her debut single Complicated which peaked #1 in many countries. The same year she released her debut album "Let Go" when she was just eighteen years old.

The album sold around 20 million copies worldwide. Her next album came out in 2004 titled Under My skin. Under My Skin was certified as Gold and also made it to the no.1 position in Billboard 200.

Her other successful album includes The Best Damn Thing was released in 2007. After almost 5 years break in a music career, Lavinge launched her fourth studio album Goodbye Lullaby which was not so successful compared to her other previous albums.

In her music career, Lavinge has been nominated for 8 Grammy awards. In total, she has received 221 awards and been nominated for 301. By 2013 she sold 40 million copies of her album worldwide and comes in 2nd after Celine Dion as highest selling Canadian female musician.

She is also the youngest female solo artist to reach the top of the U.K billboard. In 2011 she was ranked 74 on FHM list of 100 sexiest women of the world. Her hit singles include "Complicated", "Sk8er boy", "Girlfriend" and "My Happy ending".

Avril Lavinge has also appeared on various television shows. Her first appearance came as a cameo role in 2002 television series Sabrina The Teenage Witch in which she performed Sk8er Boi. She later made another cameo appearance in the movie Going The Distance.

In 2007 Lavinge traveled to New Mexico to shoot a scene of The Flock in which she performed the role of Beatrice Bell girlfriend of a crime suspect.

Apart from these roles, she has also voiced the animated character in the movie Over The Hedge and Fast Food Nation. She was also featured in the 2003 game The Sims: Superstar as a non-playable celebrity.

Avril Lavinge's Net Worth and Salary

Avril Lavinge has a net worth of $50 million which she has acquired through various sources such as music sales, concerts, world tours, endorsements film and television appearance. Her debut album Let go earned estimated $25 million.

Her 2004 album " Under my skin" earned around $14 million. From her 2008 tour The Best Damn thing she earned approximately around $13 million. Compared with other albums her 2013 comeback Goodbye Lullaby collected only $1.1 million.

On July 15, 2006, Avril Lavinge married SUM 41 singer Deryk Whibley in California. But the marriage could not last long and they divorced in November 2010. After separation with Sum 41 singer, she hooked up with Hills star Brody Jenner.

They dated for two years and split in January 2012. After July 2012 she began dating with Nickelback singer Chad Kroger.

The pair married in July 2013 but unfortunately, the relationship did not last and Lavinge announced her separation via Instagram but the divorce has not been officialized.

Besides her music and acting career Lavinge has also been involved in various charity works with Make Some Noise, Amnesty International, Special Olympics, Make A Wish Foundation and War Child.

Lavinge has also her own foundation named The Avril Lavinge Foundation, an organization to help young people having serious disability and illness. In 2015 she launched a personal fundraising campaign for Special Olympics on the occasion of her birthday.