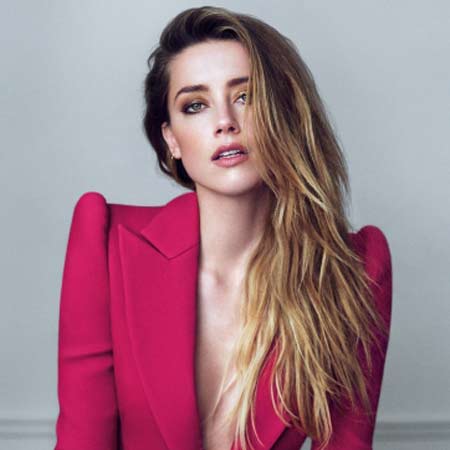 American actress, Amber Heard made her film debut in 2004's drama film, Friday Night Lights. After working in several small roles. she got to play a lead role in the 2006's movie, All the Boys Love Mandy Lane and The CW's TV show, Hidden Palms. Active in the industry for a decade has earned an impressive net worth from her career.

Regarding her personal life, she was married to a famous actor, Johnny Deep but divorced soon citing irreconcilable differences. As of 2018, she is dating her boyfriend, Vito Schnabel.

Amber Heard was born Amber Laura Heard in the year 1986 April 22 at Austin, Texas, the United States under the birth sign Taurus. Heard is American as per nationality and as far as her ethnicity is concerned, she is White.

Born to the parent's father David Heard, a contractor and mother Paige Parsons, an internet researcher for the state, was raised in Austin, Texas along with her sister, Whitney Heard.

Heard attended St. Michael’s Catholic Academy in Austin. After completing her junior year, she left the school and earned a diploma through a home-study course. When she was 16, her best friend died in a car crash after which she declared herself an atheist. Moreover, to pursue her career in Hollywood she went to LA when she was 17.

While in Los Angeles, she made several of the appearances in TV shows and in two music videos, “There Goes My Life” by Kenny Chesney and “I Wasn't Prepared” by Eisley. Afterward, Amber Heard appeared in an episode of The WB’s Jack & Bobby as Liz and in an episode of The Mountain as Riley in 2004.

Amber Heard is the gorgeous American actress and model who has dedicated her life to the entertainment world since 2004. Amber Heard had made her debut in movies from the acclaimed sports drama called Friday Night Lights. The film starred Billy Bob Thornton, Derek Luke, and Jay Hernandez.

After her performance in her first break, she never had to look back. With her hard work and talent, she had her viewers and colleagues to appraise her and admire her work. The door to a busy life in the entertainment world thus started for Amber. Along with the name and fame, she started to be busy in her career.

Having been active since her late teens, she has now made her own identity. Amber has reached the age of 26 years but is one of the young and successful actors that Hollywood cherishes. After her first work in the movie Friday Night Lights, she began to get offers to several of the movies.

After appearing in the movies, she has also appeared in the television series. Her last appearance in the television was The Playboy Club as Bunny Maureen in 2011 in seven episodes. As of 2018, she is working on the movies like Her Smell, London Fields, Aquaman, and Gully.

Besides, Heard is also a sex symbol. her photos often appear in the FHM and Maxim magazine’s Most Beautiful and Sexiest lists and have made to their covers as well. Not only as an entertainer and model, she is also a social activist. She was involved in the several campaigns including gay rights and abolishing slavery. She is also a supporter of Habitat for Humanity, Girl up United Nations Foundation, The Art Elysium and Amnesty International.

Amber Heard has been nominated for several awards and won some of them. Here is the list of her won awards:

Furthermore, in 2009, she has been nominated for Detroit Film Critics Society Awards in a category of Best Ensemble.

Amber Heard has an estimated net worth of $9 million according to Celebrity Net Worth whereas her net worth is estimated to be $14 million as per The Richest. Heard earns a huge amount from her movies and TV series.

Here are some of her movies that grossed much at the box office:

As per some sources, Heard earns $10k monthly with the basic expense of rent and clothes for $44k monthly. According to the expense doc u ment filed by her team, it showed that she roughly makes $120k yearly through her business before getting paid for movies and TV series.

The young, talented and beautiful actor Amber Heard is the heartthrob of many fans. Talking about her personal life, Heard had dated her photographer boyfriend Tasya Van Ree from 2008 to 2011.  After her breakup with Tasya van Ree, she met with her co-actor Johnny Depp while filming for The Rum Diary. It is since then she began dating Johnny Depp in 2013.

Some years after their affair, the pair got engaged in February 2015 in a ceremony on Depp's private Island in the Bahamas. The same year, they got married in a private civil ceremony at their house in Los Angeles.

In 2016, Heard accused Depp of verbal and physical abuse through the entire relationship. Later on, she filed teh divorce citing irreconcilable differences. Some months after their divorce, Depp reported that his wife blackmailed him.

After the divorce, Heard started getting closer to Billionaire Elon Musk. They started spotting together at several places. Unfortunately, the affair did not last long and they broke up soon.

As of 2018, she is in a relationship with her new boyfriend, Vito Schnabel.

Check out the facts about Amber Heard: