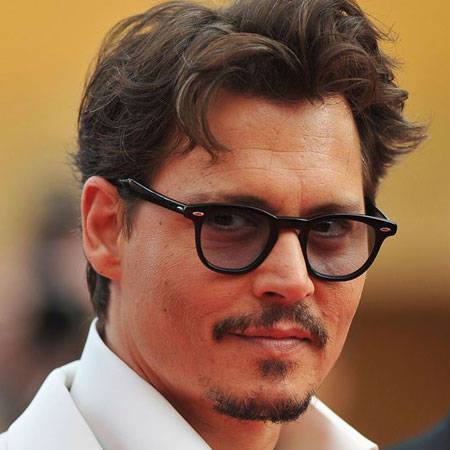 Johnny Depp, a Hollywood actor, producer, and musician,  has won several awards in his successful career. He is recognized for his significant role as Jack Sparrow in the blockbuster movie franchise, Pirates of the Caribbean.

John Depp was born as John Christopher Depp II on June 9, 1963, in Owensboro, Kentucky, U.S. He is an American by nationality belonging to the White-American ethnicity.

He is the youngest of four children born to Betty Sue Palmer and John Christopher Depp. Depp is 54-year-old now. His birth sign is Gemini. He earned massive popularity through his significant roles in his career.

Depp's father is a civil engineer whereas his mother is a waitress. He is of English ancestry mostly with some ancestors from elsewhere in Europe. He is descended from a French Huguenot immigrant, Pierre Deppe or Dieppe, who settled in Virginia around 1700.

His parent divorced in 1978. Later, his mother married Robert Palmer who became an inspiration to him.

In the year 1997, he played the role of Donnie Brasco in a movie called Donnie Brasco and his amazing performance won millions of hearts all over the world.

He has also given his voice to many characters in TV shows and movies. One of them is the character called Victor Van Dort in the movie, Corpse Bride in 2005. His significant role as Captain Jack Sparrow in Pirates of the Caribbean will always remain one of the best portrayals ever.

His other movies and TV shows are Tusk, 21 Jump Street, Into the Woods, The Lone Ranger, Jack and Jill, King of the Hill, and Family Guy.

In 2016, he played the role of the current POTUS Donald Trump in the parody movie The Art of the Deal: The Movie, based on the book of the same name published by Donald Trump.

In 2017, he reprised the role of Captain Jack Sparrow in the fifth installment of the Pirates of the Caribbean film series. Depp is also engaged with various films which will release in 2018.

Johnny Depp's net worth is $75 million at present. He has earned a massive amount of salary from his acting career. His net worth in 2016 was $400 million.

He earned $35 million working on his movie, Pirates of the Caribbean's fifth installment in 2017. Depp’s box office hits have grossed over $3.4 billion in America alone, bagging over $8.7 billion worldwide at the box office.

His latest movie, the fifth installment of Pirates of the Caribbean garnered $794.8 million at the Box Office. He has three lavished mansions- Quantock Hills house ($5 million), California house($3 million), and Plan de la Tour house ($2 million). He has a lavish car manufactured by Chevrolet Corvette, which cost $64,900.

Depp stands at a height of 5 feet 10 inches around 1.78 meters. He has already won the prestigious Golden Globe Award and Screen Actors Guild Award in the category of Best Actor.

Depp proposed to his co-star Winona Ryder in 1990 and has tattooed "WINONA FOREVER" on his right arm. He started having a relationship with Kate Moss, an English supermodel in 1994. The couple stayed in a relationship until  1998.

Depp started a relationship with the French actor, Vanessa Paradis following his breakup with Moss. The couple first met while filming The Ninth Gate in France in 1998. They together had two children; a daughter named Lily-Rose Melody Depp and a son named John "Jack" Christopher Depp III.

According to Depp, having children has given him a "real foundation, a real strong place to stand in life, in work, in everything. He also added that anyone can't plan the kind of deep love that results in children.

Depp and Paradis announced their separation in June 2012. Soon after, he started dating Amber Heard, whom he met on the set of The Rum Diary in 2011. The couple tied their knot in February 2015. Their wedding ceremony was held at their home in Los Angeles.

Heard filed for divorce on May 23, 2016. Five days later, she filed and obtained a temporary restraining order against Depp stating that Depp has been verbally and physically abusive to her during their relationship.