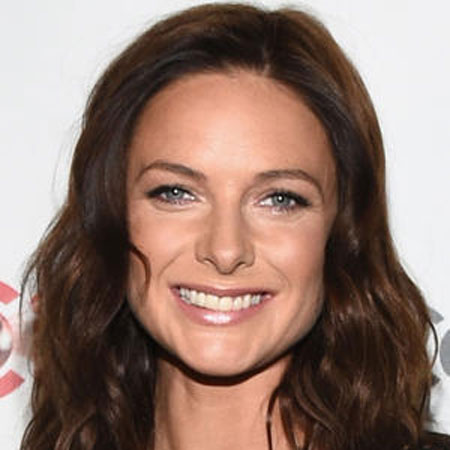 Swedish actress, Rebecca Ferguson is best known for her role Elizabeth Woodville in the British television drama series The White Queen alongside Max Irons and Faye Marsay. Her performance in the show earned her a nomination for the Golden Globe Award for Best Actress. Her character named Ilsa Faust in Mission: Impossible-Rouge Nation (2015) was loved by the audience. She is all set to return in the next Mission Impossible franchise, Mission Impossible-Fallout in 2018.

Ferguson made her acting debut with Swedish soap opera, Nya Tider in 1999 and has appeared in more than two dozens Movies and TV series to date.

Rebecca Ferguson was born Rebedda Louisa Ferguson on October 19, 1983, in Stockholm, Sweden to Rosemary Ferguson, a British model. She is Swedish and belongs to the mixed ethnicity (English and Swedish). She was raised along with her three siblings.

She was too young when her parents divorced, and Ferguson took her mother's surname as her stage name. She was raised in bilingual and joined an English-speaking school in Sweden. She started her modeling career at the age of 13 and appeared in several magazines and TV commercials.

Rebecca Ferguson learned ballet, tap-dancing, jazz, street funk, and tango. She used to teach Argentine tango at a dance company in Lund, Sweden for few years. In 1999, she graduated from the Adolf Fredrik's Music School in Stockholm.

Rebecca Ferguson started her acting career in 1999 with Swedish soap opera, Nya Tider. She played the role of Anna Gripenhielm and appeared in 54 episodes until her departure from the show.  She then appeared in several other TV series and movies such as Ocean Ave, Strandvaskaren, Vi,  The White Queen.

Ferguson earned her first Golden Globe nomination for Best Actress – Miniseries or Television Film for her performance in The White Queen. Even Tom Cruise appreciated her work and hand-picked her to star opposite him in Mission: Impossible – Rogue Nation.

Rebecca Ferguson portrayed the character of  Ilsa Faust, MI6 agent undercover in the Syndicate. She received Hamptons International Film Festival Award for her role. She will reprise her role in the sixth installment of Mission: Impossible – Fallout which is scheduled to be released in 2018.

Some of her screen credit includes Florence Foster Jenkins, Life, The Girl on the Train, The Snowman,  The Greatest Showman, The Red Tent and others. She has also played on few short movies like Lennart, Puls, and Irresistible.

Rebecca Ferguson is one of the promising actresses of Hollywood and has earned a decent amount of net worth, however, the actual figure is still under review. Usually, the average salary for a Hollywood actor is $150,000 to $300,000. So, we can a s sume she also gets paid around this figure.

Ferguson has given many hits in her career and some of the movies which made a huge box collection are listed below:

Rebecca Ferguson is still not married and is possibly single, however, in January 2018, she revealed she is pregnant with a second child on The Graham Norton Show. In February 2018, she debuted her baby bump on the red carpet of BAFTAs at London's Royal Albert Hall. Due to her secretive nature, she hasn't revealed the father of her child.

Previously, Ferguson was in a relationship with Ludwig Hallberg with whom she has a son born in 2008. The relationship of the couple did not last long, and they broke on a mutual understanding in 2015.

She was also rumored to date her fellow co-actor, Tom Cruise but she denied the rumors and revealed she has a huge crush on Cruise since her childhood. In an interview, she said,

I don’t know where that comes from. There’s no one who has more connection. He’s a people person. I mean, I’m insecure and I question myself every time I do a scene, but with Tom you feel like an actress who is working alongside him. He’s interested and he’s present.

Here is the video of Rebecca Ferguson talking about her movie Snowman along with co-actor Michael Fa s sbender.