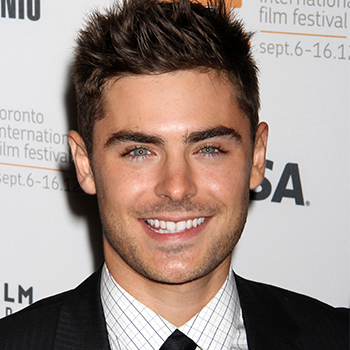 Now a big name in the film industry, Zac Efron is an American actor and singer. Zac Efron is eminent for his lead role in Disney Channel's Original teen/children’s romantic comedy musical movie, High School Musical. Like many actors of his age, Zac was also influenced by drugs and alcohol. Zac has admitted to the fact that he had to go to rehab to get rid of his drug addiction.

Zac, till date has done many movies including Hairspray, 17 Again, New Year’s Eve, The Lucky One, The Awkward Moment and the most recently talked about the movie, Neighbors. While filming High School Musical he released many albums, some of which topped the charts.

Zac was enlisted #5 Sexiest Man in Glamour’s List of “50 Sexiest Men “ in 2011 and was also recognized by Time Magazine as one of the world’s 100 most influential people in 2009. Zac Efron has been nominated for many awards, especially Teen Choice Awards and has also won many including People’s Choice Award, MTV Movie Award and also Nickelodeon Kid’s Choice Awards.

Zac and his family later moved to Arroyo Grande, California. When Zac was about 11 years old, his father encouraged him to start acting. Then during the years of 2000 and 2001, Zac attended a community school located in Santa Maria, California named Pacific Conservatory of the Performing Arts. Zac attended the Arroyo Grande High School and graduated in 2006 then, he was accepted into the University of Southern California.

Zac made his debut in television by acting as Young Simon Tam in an episode of TV Series Firefly. Then in 2003, he was seen in The Guardian and ER. Later in 2004, Zac played the lead role, Cameron Bale in 16 episodes of American drama television series Summerland.

From then on, Zac has appeared on various episodes of TV series like CSI: Miami, The Replacements, Heist, The Suite Life of Zack & Cody, NCIS, and Robert Chicken. Zac was also seen in Saturday Night Live and Entourage in 2009.

Apart from television, Zac has made a fortune especially by acting on the big screen. Zac debut was as character Stuart Wa s ser in the 2003 film adaptation of Marianne Kennedy’s novel, Melinda’s World. Then in 2004, Zac acted as character Steven Morgan in movie Miracle Run.

For his performance, Zac was nominated Young Artist Award for Best Performance in a TV Movie, Miniseries or special-Supporting Young Actor. In 2005, Zac starred in The Derby Stallion. Then in 2006, Zac made his breakthrough in cinema by starring as Character Troy Bolton in the American teen/children’s comedy musical television film, High School Musical.

Zac gained huge recognition through this movie, not only for his acting but also for his singing abilities. Shortly after the film aired, Zac’s two songs; Get’cha Head in the Game and Breaking Free, were listed in Billboard Hot 100. Breaking free, sung by Zac and Vanessa Hudgens made the fasted climb in the history of the Billboard charts from no.86 to no.4 within 2 weeks.

Then the next year, 2007 Zac was seen in another hit American musical film named Hairspray as character Link Larkin. For the movie, he shared Broadcast Film Critics Association Award for Best Cast with the Hairspray cast, Hollywood Film Award for Ensemble of the Year, with the cast, Film Festival for Ensemble cast, People’s Choice Award for Favorite song from a Soundtrack.

In 2012 Zac also acted in The Paperboy and At Any Price. In 2013, Zac was seen in Parkland. Recently, Zac Efron starred in the American romantic comedy, The Awkward Moment. Zac received MTV Movie Award for Best Shirtless Performance.

Zac Efron has an estimated net worth of around $25 million, as per celebrity net worth, in 2019. In the year 2017, the actor played the role in the movie The Greatest Showman which became the instant hit at the box office grossing over $434 million worldwide. In the movie, he played the role along with Michelle Williams, Rebecca Ferguson, Zendaya and Hugh Jackman.

Efron was listed on the Forbes Celebrity 100 in 2008 at no.92 with earnings of $5.8 million from July 2007 to June 2008. Zac earned hugely from movies like Hairspray and High School Musical. Zac was at the time highly influenced by alcohol and drugs and was inclined to substance abuse.

Since the release of High school Musical, the squeaky-clean Disney star started drinking and using drugs; cocaine, as some sources say. Zac also became the center of substance abuse allegations so by the end of “The Awkward Moment” he had joined a rehab. Zac Checked into the rehab briefly for 5 months and has been sober since June 2013.

Zac Efron dated co-actor Vanessa Hudgens from 2006 to 2010, whom he met in High School Musical. Zac is currently dating actress Michelle Rodriguez. Zac has starred in the 2014 American comedy film, Neighbors. He was also once rumored to be dated, Alexandra Daddario.

Zac Efron is looking forward to his 2015 movie, The Associates. Zac Efron’s biography can be found on many sites including a wiki. Zac is good friends with his idol Leonardo DiCaprio and the media a s sumes that he will turn out much like DiCaprio in regards to Zac’s substance abuse and his acting abilities.

Also Read, Zac Efron talks about him maintaining his body