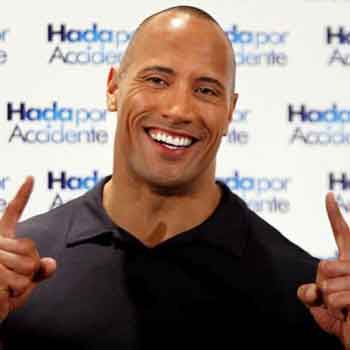 Dwayne Johnson aka The Rock is a professional wrestler and American-born actor. He has established his name in both the fields. Johnson set the record for being the Youngest WWE Championship in 1998. Johnson has appeared in various films including The Mummy Returns, Journey 2: The Mysterious Island, Furious 7 and Baywatch.

His first leading role was in the 2002 American historical fantasy The Scorpion King that grossed $163.5 million at the box office.  He was paid US$5.5 million for the movie, a world record for an actor in his first starring role.

He recently appeared in the second part of action adventure film Jumanji, Jumanji: Welcome to the Jungle. The movie grossed whopping $962.2 million at the box office.

He has been married to Dany Garcia from 1997 until 2007. They together have a daughter named Simone. He has been in a relationship with Lauren Hashian since 2007. The couple shares two daughters; Jasmine Hashian and Tiana Gia Johnson.

Johnson was born as Dwayne Douglas Johnson on May 2, 1972, in Hayward, California, U.S. He is an American by nationality belonging to the mixed ethnicity. He is the son born to Ata Johnson (mother) and Rocky Johnson (father).

His father is also a professional wrestler. His father is a Canadian belonging to a Black Nova Scotian, whereas his mother is of Samoan descent.

Johnson’s relatives are professional wrestlers including his maternal grandfather, “High Chief” Peter Maivia. Johnson lived with his mother’s family for a short while in Auckland, New Zealand where he attended Richmond Road Primary School. Later he went to the United States with his parents.

Johnson spent his 10th grade at President William McKinley High School based in Honolulu, Hawaii. Then he spent his 11th Grade at Freedom High School in Pennsylvania where he started playing football.

Johnson became a member of the school’s track and field and wrestling teams. When the Canadian nationality law came into effect making all the people born in the first generation abroad after 1947 to Canadian born parents automatically got Canadian citizenship. Therefore Johnson became a Canadian.

Johnson played the Canadian football league for Calgary Stampeders in 1995. Johnson graduated from Miami in the same year with a Bachelor of General Studies degree in criminology and physiology.

Johnson decided to make wrestling his career like his relatives. Johnson got several tryout matches with the World Wrestling Federation (WWF) in 1996. Under his own name, Johnson defeated The Brooklyn Brawler.

Johnson signed a contract with WWF after winning USWA World Tag Team Championship twice with Bart Sawyer in 1996. Johnson made his WWF debut as a new name; Rocky Maivia which is a combination of his father’s and grandfather’s name.

Johnson was hyped as the WWF’s first third-generation wrestler. He was the sole survivor in the Survivor series in 1996. Johnson won the WWF Intercontinental Championship on February 13, 1997. He then defended the title at In Your House 12: It’s Time. Johnson returned as a heel after suffering a knee injury in a match against Mankind at Raw is War.

Later, Johnson refused to be acknowledged by the name “Rocky Maivia” and referred himself as “The Rock”. The Rock defended the Intercontinental title at In Your House: Over the Edge on May 31, 1998. The Rock later became number one contender for the WWF Championship.

On June 25, The Rock won his fifth WWF Championship at King of the Ring. He lost the following championship to Angle at No Mercy in October. Rock returned to the WWF ring in July 2001. The Rock teamed with Jericho to win the WWF World Tag team Championship.

Rock won his record-breaking seventh WWF championship at Vengeance. Rock, unfortunately, lost the WWE Championship to Lesnar. He inducted his father and grandfather into the WWE Hall of Fame on March 29, 2008.

The Rock was revealed as the host of WrestleMania XXVII on February 14, 2001. Later The Rock and John Cena agreed to a match at WrestleMania XXVIII one year in advance. The Rock returned to WWE championship on January 7, 2013, Raw. The Rock won his eighth WWE title at Royal Rumble.

Apart from wrestling, Dwayne Johnson is also well known in the film industry. Johnson made his debut in the entertainment field on Wyclef Jean’s 2000 single “It Doesn’t matter” and in its music video.

In the same year, he hosted Saturday Night Live when he guest starred on Star Trek: Voyager. Johnson made his debut in a motion picture as the Scorpion King in the opening sequence of The Mummy Returns.

Johnson received a Teen Choice Awards in 2001. He was listed in the 2007 Guinness World Records as the highest paid actor in his first starring role receiving US$ 5.5 million for The Scorpion King.

Johnson was seen in the 2010 action film; Faster. Johnson appeared in the fifth film of the fast and the Furious film series, Fast Five as character Luke Hobbs who is a Diplomatic Security Service agent. Johnson starred in Journey 2: The Mysterious Island in 2012. The next year Johnson starred in Snitch.

In the same year, he played Roadblock in G.I. Joe: Retaliation. Johnson also reprised his role in Fast and Furious 6. Johnson starred in Pain & Gain and Empire State in 2013 and won the Favorite Male Butt Kicker Award at the 2013 Nickelodeon Kid’s Choice Awards on March 23, 2013.

Johnson also starred in 2014’s Hercules as the title Character. Johnson will reprise his role in Fast and Furious 7.

Dwayne Johnson's Net Worth And Salary

Dwayne Johnson's net worth is $220 million at present. He has a huge earning of $64.5 million yearly, making him the highest-paid actors of 2016. Johnson has a $3.4 million mansion in Florida.

Johnson was named Forbes top-grossing actor of 2013 on December 16, 2013, with his film bringing in $1.3 billion worldwide for the Year.

Johnson donated $2 million to build a living room at the University’s Newman Alumni Center. The couple announced on June 1, 2007, that they were splitting up but intended to spend the rest of their lives together as best friends.

Johnson has a collection of cars manufactured by several companies. Here is the list of his cars.

Johnson stands tall at the height of 6 feet 5 inches and has a hefty weight of 120 kg. Dwayne met his future wife, Dany Garcia while attending the University of Miami. The couple married on May 3, 1997. They together have a daughter named Simone Alexandra on August 14, 2001.

The couple donated $2 million to build a living room at the University’s Newman Alumni Center. The couple announced on June 1, 2007, that they were splitting up but intended to spend the rest of their lives together as best friends.

Johnson started dating Lauren Hashian, soon after their divorce. They first met in 2006, while Johnson was filming the movie, The Game Plan. The couple welcomed their first child, a daughter named Jasmine in Deceme]ber 2015.

Johnson is active on social networking sites such as Twitter and Instagram. He has earned a huge number of fan followers on his social accounts.