Pollyanna McIntosh who plays Jadis (impassive leader of the Scavengers) in horror TV series The Walking Dead is also part of 2009’s psychological thriller film, Exam. McIntosh is also popular for her role in several movies like The Woman, Filth, and Let Us Prey. She made her big screen debut as Stacy in 2005’s movie Headspace.McIntosh was married to actor, Grant Show from 2004 to 2011.

Pollyanna McIntosh was born on 15th March 1979 in Edinburgh, Scotland under the birth sign Pisces. McIntosh is the daughter of David McIntosh and Judith McIntosh. She has three sisters. When she was two, her family moved to Portugal and later shifted to Edinburgh. The family soon moved to Colombia. Whenever McIntosh was asked about her family’s shifting, she used to answer,

‘’ People ask me why I was there and I often tell them my dad was a drug dealer. Quite often they are convinced, which is fun for a while until I have to tell them the real story. My dad was an actor when he was younger.’’

McIntosh attended St George’s School for Girls where she was bullied for something chronic.

Pollyanna McIntosh made her acting and directional debut at the age of 16, appearing in London’s independent movies and theaters. McIntosh moved to LA in 2004 where she appeared in the stage production The Woolgatherer alongside Anne Dudek and Dyan David Fisher.

Some of her other popular movies include:

McIntosh made TV debut in 2007 as Katya Zemanova in Bats: Human Harvest. The TV film starred David Chokachi, Tomas Arana, and Melissa De Sousa. She then worked in an uncredited role in several TV series like Taggart, Danis’ House, Book Club, and Casualty.

Moreover, McIntosh appeared in some episodes of  Joe R. Lansdale’s Hap and Leonard as Angel in 2016. Particularly, she is famous for her role in The Walking Dead. From 2017-18, she played the role in the TV series Talking Dead.

McIntosh landed the role of the impassive leader of the Scavengers, Jadis in AMC’s Horror TV series, The Walking Dead. Her audition impressed the directors and became their favorite one. She explained.

The series starred Steven Ogg, Andrew Lincoln, Norman Reedus, and Lauren Cohan. McIntosh is associated in the series since 2017 appearing in over 10 episodes.

Besides acting, McIntosh also pursued her career in modeling. In 1995, she won a modeling competition which became one of the reasons to build her career in fashion. Furthermore, McIntosh appeared as a plus size model for Vogue. Later, she left modeling to pursue a career in acting.

Pollyanna McIntosh’s Net Worth And Earnings

Pollyanna McIntosh accumulated an estimated net worth not less than $1 million, but, the amount is not public. McIntosh’s major source of income is her acting career.

As per some online sources, The Walking Dead stars averagely makes a salary of $32k per episode.

McIntosh created a website, www.pollyannamcintosh.net where she raised money for Joshua Nolan Foundation by selling different items like caps, t-shirts, and sweatshirts. The foundation helps to provide awareness about mental health and provides free counseling for the needy one.

Furthermore, he also has a dog.

Sammy and I are on our way to @buildseriesnyc to join the brunch table. Tune in at buildseries.com to join us. #TWD #TheWalkingDead #TWDFamily

Pollyanna McIntosh, the talented actress, is a divorcee. Previously, McIntosh was married to American actor, Grant Show who is popularly known for his role in Melrose Place. The couple tied the knot on 17th July 2004 in a private ceremony attended by their families and friends. 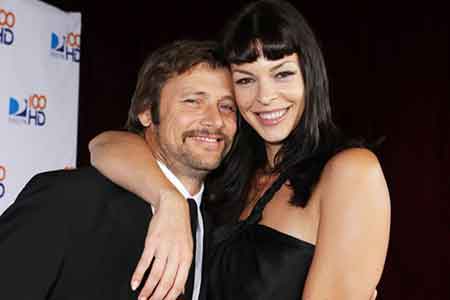 The couple divorced in 2011 due to irreconcilable differences. McIntosh told the stake assets include her diamond wedding ring, a 1978 Corvette Stingray, a 1968 Mustang convertible and other furniture & appliances. The couple was together for years but had no children. When she was asked about her past relationship, she says,

‘’ Yeah, I’ve had that relationship before,” she says. I think it can be great fun. Now I’m at an age where it doesn’t interest me so much, but there are always times for casual sex.’’

After the divorce, McIntosh remained single whereas, her ex-husband married Katherine La Nasa and also has a child. She told,

‘’ My ex-husband just had a baby [with his new wife] and I found out online a couple of weeks ago.’’

McIntosh is a dog lover and also has a pet named, Rizzo. Her personal interests include painting, flora& fauna, cuisine, love and love, and divine comedies.

Here is the video where Pollyanna McIntosh talks about her audition on The Walking Dead: