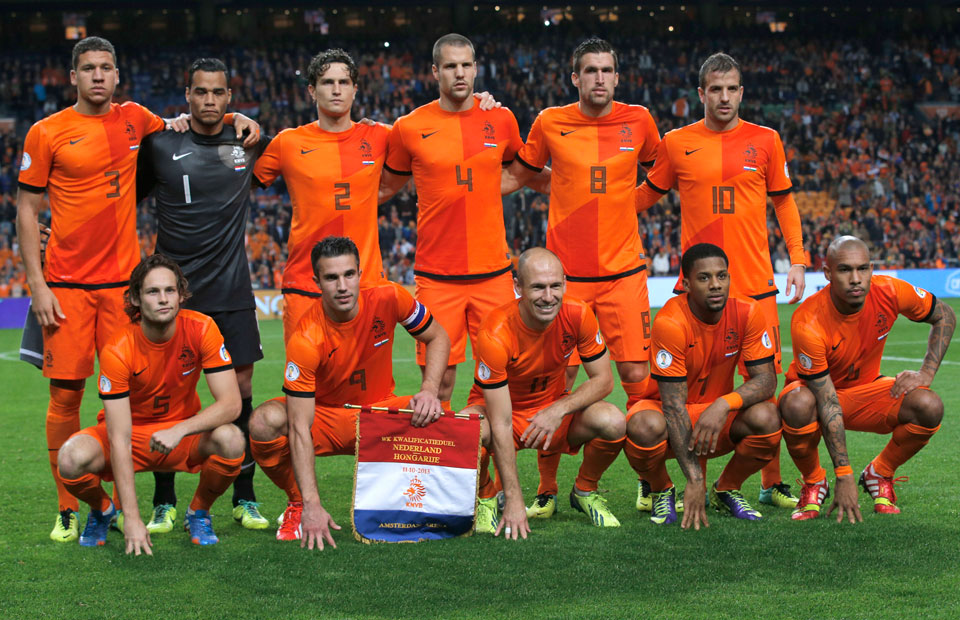 The Netherlands national football team, often known incorrectly as the Holland team, holds the record of being the team which has had a history of playing the most World Cup finals without winning the title. In the FIFA World Cups 1974, 1978 and 2010, they finished in the second place losing respectively to West Germany, Argentina and Spain. The current coach of the team, Lois van Gaal will be replaced for the 2014 FIFA World Cup by Guus Hiddink. The team is known as the Nederlands natinaal voetbalelftal in Dutch and is controlled by the Royal Netherlands Football Association.

The first appearance of the team at the World Cup final tournament was in 1934 and then a second one in 1938. Netherlands did not appear in another World Cup until 1974, the time when the legendary Total Football had been invented in the country. The team defeated both Brazil and Argentina in the second group stage and reached the finals for the first time in their history but lost to West Germany. The decade was a good one for the team as it reached the finals again in 1978 despite being less impressive in the group stages, and was beaten by Argentina.

The achievements after this weren’t worth noting as the team missed the 1982 and the 1986 World Cup successively. The 1990 World Cup increased the expectations from the team but it did not work out as planned. They hardly managed to advance into the 16th round whereby they were defeated by West Germany. Moreover, the spitting incident involving Frank Rijkaard and Rudi Voller became famous and was the highlight of the match.

The team failed to qualify for the 2002 World Cup after losses to Portugal and the Republic of Ireland. This caused the resigning of the manager Van Gaal. As for the 2006 World Cup, the team qualified but lost to Portugal in second round with 16 yellow cards and four red cards, a World Cup record for most cautions in one game. The match was nicknamed the Battle of Nuremberg. The Dutch secured a 100 percent record in the 2010 World Cup qualification campaign under new coach Bert van Marwijk and were placed alongside Denmark, Cameroon and Japan in Group E. the team finally advanced to the semifinals and beat Uruguay to reach the finals. The Dutch lost to Spain, 1-0. The team was ranked number 1 in the FIFA World Rankings from August to September 2011, becoming the second national football team, to tope the rankings without previously winning the World Cup, after Spain.

As for the soccer World Cup 2014, Netherlands has started with a blast and given an awesome performance in every qualifier. It has won a total of nine games with one draw. This earns them the top position of the group and automatic qualification to the World Cup. They have been drawn to Group B along with Spain, Chile and Australia. As of the FIFA/ Coca- Cola World Ranking, Netherlands has been placed in the 15th position.