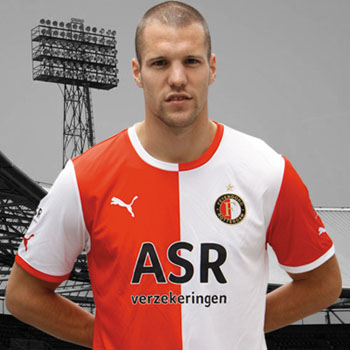 Ron Peter Vlaar popularly known as Ron Vlaar is a Dutch footballer who was born in Hensbroek, North Holland, the Netherlands on 16 February 1985. He plays as a defender as well as captain from the club Aston Villa and also as a center back from the Netherlands national team.

His father was an amateur football player while his mother Margaret Vlaar was a handball player. He is the eldest of all siblings and has two younger sisters named Ellen and Lisan who are also involved in sports. Lisan is actively playing Volleyball while Ellen is a Gymnast. At a very young age of six, he had joined the local club Apollo’68 but had begun his training at the age of 5.

His coach Kees Wijte admires him completely. He had a strong and powerful mentality and a very good kick with both the legs. He always had the flagging spirit and played to win. He left club Apollo’68 during his final year in elementary school and joined SVW’27 from Heerhugowaard. He played for one season and was invited by AZ youth academy. He signed his first contract in 2002 until 2007.

He made his first debut in 2004-2005 seasons when he was 20 years old. He suffered from injuries in the first team squad and was paired against experienced player Barry Opdam on 23 April 2005 against RKC Waalwijk. He made his European debut on 28 April 2005. He played two UEFA Cup and three Eredivisie matches during his debut season. He had a lot of expectations from the 2005-2006 season but things did not turn out to be his way as more experienced players were preferred over him and he was part of starting line thrice.

He signed a three and half year contract with Feyenoord on 28 December 2005. He made his debut for Feyenoord on 15 January 2006 against Vitesse. The season 2006-2007 proved to be more of a jinx as he was ailing from the foot injury in the pre-season match against Reading. He recovered from the ailment and played 20 Eredivisie matches in the remaining season. He suffered from injury twice while playing in the Eredivisie o 16 September 2007 against Roda JC.

He didn’t appear in the rest of the season as a bacterial infection hauled him after the ligament surgery. He, however, recuperated at the beginning of 2008-2009 seasons. He was curtailed for two seasons consecutively out of health deterioration. He had a strong comeback since then.  He helped in securing a spot in the third qualifying round in Eredivisie for the 2012-2013 UEFA Champions League. He signed a three-year contract with Aston Villa on 1 August.

He was made the captain on 15 September for the 2012-2013 seasons. Under his captaincy, they won the first match with 2-0 against Swansea City. He has also been part of several international matches like 2010 FIFA World Cup, UEFA Euro 2012.

According to the Celebrity Net Worth, his net worth is estimated to be around $15 million.

He was married to Stephanie Vlaar in the year 2010. The relationship lasted only two years. He has two children with. Just after the birth of their second son they called off divorce the marriage in 2012.

His height is 1.89m and weight is 80 kg. His market value is 5,000,000 Euros. His current team is Netherlands national football team and Aston Villa F.C and he plays as a Defender.