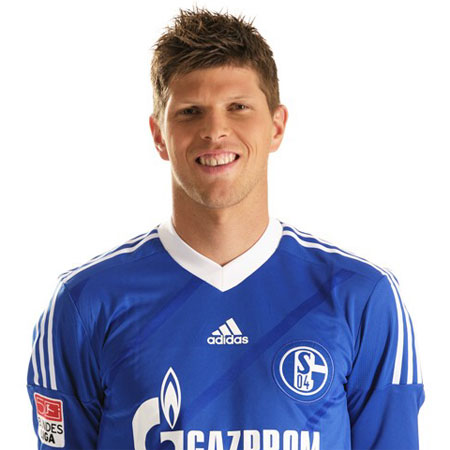 Dirk Klaas Jan Huntelaar, commonly known as Klaas-Jan Huntelaar is Netherlands international football player. He plays in the forward position for German Bundesliga club Schalke 04 and also the Dutch national football team. Huntelaar is a world-renowned player and often praised for his brilliant ball play, athleticism, and technique. No wonder, he is compared with footballing legends like Ruud Van Nistelrooy and Marco van Basten. The player has also been tagged as the best in the world in the penalty area.

Huntelaar has played for the number of clubs like PSV, De Graafschap, AGOVV Apeldoorn, Heerenveen, Ajax, Real Madrid, and Milan. His current team is Schalke 04. He also plays for his nation Netherlands. His net worth is $35 million at present.

He was born on August 12, 1983, in Voor-Drempt, Gelderland in the Netherlands. He is the son of Dirk-Jan and Maud Huntelaar. He has two brothers Niek and Jelle. At the age of five, Huntelaar, along with his two brothers, joined the local football team VV H. en K., where he played for the next six years.

Huntelaar was into football from the very early age. He was associated with local football team VV H. en K at the very age of five. He enriched his footballing talents there for six years. Later, being scouted by De Graafschap as emerging talent, he penned his first youth contract at the age of 11 on 6 April 1994. There he was figured out best in forward after being experimented in the number of other positions like wings, midfield, defense and even goalkeeper. It was the 1997-98 season which made him the familiar name in the football arena when he proved himself as a potential striker for top teams scoring 33 goals in 20 matched for the third-tier team of the club. He was then signed by PSV.

He proved himself in the very first season for PSV, as he scored 26 goals in 23 games for their youth teams and also became league’s top scorer. He made first team debut on 23 November 2002. Huntelaar was unlikely to start in the senior team as the 2003 season started, and then he was loaned out to De Graafschap.On 8 Feb 2003 Klass made his senior debut for De Graafschap.

Huntelaar returned to PSV as the season ended, but was again loaned out to AGOVV on 1 August 2003. He scored 27 goals in his 37 appearances. As the loan of AGOVV ended, he didn’t pen the new contract with PSV. Then he was signed by SC Heerenveen for 900,000 Euros. Ajax became to other clubs to secure him in the mid-2005-06 season.

He was signed by Ajax for 9 million Euros. The player spent 3 years in the clubs and scored the number of goals and scored 76 goals in his 92 appearances for the club. The player was then unveiled in Spanish club Real Madrid’s outfit. He spent the short time with Spanish side scoring 8 goals in 20 matches.

The German club Schalke 04 then unveiled him at the price tag of 14 million Euros on 31st August 2010. So, far he has played 100 matches for the German club and has scored 59 goals.  Since then he has been playing with Schalke 04 outfit. Huntelaar unveiled him in the continental arena with SC Heerenveen after playing European Cup.

Huntelaar made into Netherlands U-21 team in 2001. He played in 2001 FIFA World Youth Championship. He scored 2 goals in the tournament. He has scored the total of 18 goals in his 23 appearances for Netherlands U-21 side.

Huntelaar made to the senior team of Netherland unveiling himself in the friendly match again the Republic of Ireland on 16 August 2006. Huntelaar scored 2 and assisted for 2 goals in their 4-0 win. He scored his first competitive International goal in the UEFA Euro 2008 Qualifying games when the Netherlands beat Slovenia 2-0. He then made his appearance in Euro 2008.

Huntelaar was also in the final squad of 23 for the 2010 FIFA World Cup in South Africa. He also appeared for Euro 2012 qualifying. So far, he has scored 34 goals in his senior Netherlands outfit and is only 7 goals away from the all-time record of 41 goals of Manchester United star and the other prolific Dutch striker Robin van Persie.

Klaas-Jan Huntelaar's Net Worth And Salary

Klaas-Jan Huntelaar's net worth is $35 million at present. He earns an annual salary of $8 million from his successful playing career. He played for Amsterdam for two years and was the league's top scorer in both seasons, scoring an incredible 76 goals in 92 games.

He was signed by Dutch giant Ajax Amsterdam who paid a reported $12 million for the striker. He scored nine goals in seven matches for Ajax, including against Italian Serie A club Internazionale on his UEFA Champions League debut.

He also got the success of naming himself as Dutch Under-21 All-Time Top Scorer. He has been FC Schalke 04 Record Goalscorer in UEFA Competitions with 17 goals so far. These are his personal achievements so far.

Klaas-Jan Huntelaar was born to Dirk-Jan and Maud Huntelaar. He has two brothers Niek and Jelle. It has also come to light that the Netherlands international and Schalke 04 forward has been in the relationship with his Partner, Maddy Schoolderman since 2000.

He has two children. The couple had their first child on 9 April 2009. The baby boy was named Seb. They had their second child Alex on 20 July 2011.

He stands at the height of 1.86 meters and weighs 78 kg. He is the right footed player. He is active on Twitter and Instagram with thousands of followers.