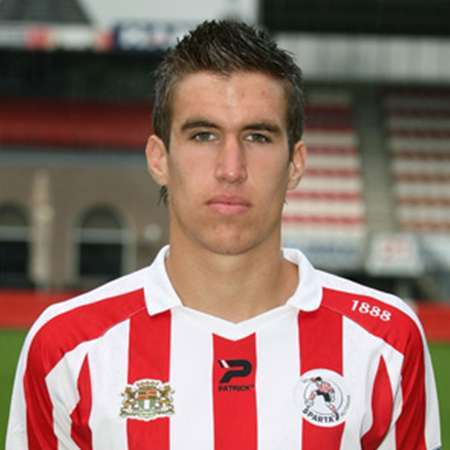 Kevin Strootman is a famous Dutch footballer who is associated with the Italian football club, FC Roma. Starting with Sparta Rotterdam, Strootman traded to Utrecht, PSV before signing with Roma. He made his international debut in 2011 and played the 2014 World Cup qualifier, however, he missed the tournament due to injury.

Kevin Strootman is a Dutch International football player born on 13th February 1990 at Ridderker, Netherland. This 24 year old young footballer has the height of 1.86m and weight of 78 Kg. He has started his professional career from 2008. According to the player statistics record, his salary in 2013 was reported to be 2.2 million Euros.

He is a left-footed player whose main position is the Central Midfield. His current team is A.S. Roma. He plays from the squad number 6 in the team. Kevin Strootman also plays for the Netherlands National Football team as a midfielder.

Kevin Strootman started his career with the professional debut from the club Sparta Rotterdam. In 2007-2008 seasons, he played from the youth team. He then extended the contract with the same club in 2008 till 2011. He appeared in 72 matches scoring 8 goals for the club. Later in 2011, he joined Utrecht. He spent a few months in the club. He played 14 games from Utrecht bagging 2 goals and moved to PSV in June of the same year.

PSV was one of the top clubs in the Netherlands at that time so he made a smart move for quick learning at that young age. He played 62 games for PSV making 8 goals for the team. In this period in 2011, Kevin Strootman was chosen in the Netherlands National Football Team. In 2013, he was transferred to A.S. Roma from PSV after a deal was finalized for his transfer to the Italian Serie A. Till now; Kevin Strootman has played 24 matches for A.S. Roma making 5 goals contribution to the club.

Kevin Strootman is famous as a tough-tackling midfielder. He has a good vision, durability in the game and passing capability. He is young, enthusiastic midfielder having good speed, creativity, control over the ball and shooting skills. He is called as the Dutch Roy Keane (Roy Keane is an Irish footballer) for his uncompromising style of the play. However, his diving skills in the game need to be improved for better performance. He has got 7 yellow cards and 1 red card until now from the start of his career. He is a disciplined player.

Time to time, Kevin Strootman is being injured, which led him to miss many important matches in his boosting career. In 2012/2013 season, he was troubled from a back problem. In the season of 2013/2014, he was injured twice from the Malleolar injury. And recently in March 2014, he is injured from Cruciate ligament injury while playing against Napoli.

He missed the rest of the matches of the season. He was supposed to be line up in the midfield of Netherlands National Team for FIFA World Cup 2014 but alas! It got shattered. Kevin Strootman has recently been through surgery and has given thanks to all his supporters as well as well wishes to his club and National Football team team-mates.

Kevin Strootman's Salary And Net Worth

The famous Dutch footballer who plays the professional football with the Italian club Roma earns a good amount of money. According to celebritynetworth.com, Strootman gets a pretty handsome salary of $3 million. The tabloid reported, Kevin Strootman has an estimated net worth of $12 million.