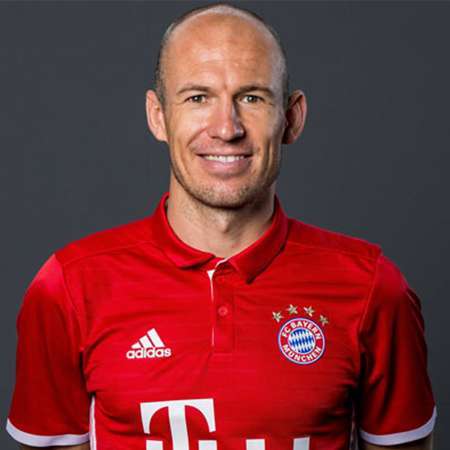 Arjen Robben is a professional football player, plays as a winger for German club Bayern Munich. He is best known for his dribbling skills, speed, crossing ability and his accurate left foot long-range shots from the right wing.

He is regarded as one of the best wingers in the world and was praised by ESPN for his ability and playing skills.

Robben took a retirement from international football on October 10, 2017, after the team's unsuccessful qualifying campaign at the 2018 World Cup.

Arjen Robben is a renowned Dutch footballer born on 23 January 1984 in Bedum, North Eastern Netherlands. He is from a European nation. He plays for Bayern Munich and German Bundesliga. He has excellent dribbling skills, speed; crossing ability makes him a terrific performer.

He was born to Hans Robben, his father, and Marjo Robben, his mother. He was interested in football from his childhood. His skills were recognized very early in life and he was quickly picked up by regional club FC Groningen where he learned a great deal about making spectacular goals.

He was placed in the first team for the 1999-2000 seasons in which he scored three goals. In the 2000-2001 seasons, he scored two goals for Groningen and was awarded the player of the year. He had played 28 matches scoring six goals during his stay with Groningen.

He was then transferred to PSV for 3.9 million dollars. He played 33 matches with c u mulative 12 goals in the first season of 2002-2003 for PSV. He was rewarded with “PSV co-player of the year”.

He has also won the talented player of the year award. Towards the end of the season, he suffered from hamstring twice and was skipped several games. He, however, registered five goals in 23 Eredivisie matches.

Robben was a prominent and a strong player in the 2004-2005 seasons. He was awarded FA Premier League “Player of the Month” award. He was injured in the league game and came back to shape in 2005-2006 where he played for Chelsea. He scored six goals that also won him the Premier League championship.

He also appeared in the League game against Liverpool which was a win with 2-0. He was also awarded man of the match title on 23 December 2006 after winning a match against Wigan. He suffered from an injury while playing against Liverpool on 2007, 20 January and made a comeback on February registering a 3-0 victory against Middlesbrough.

At the end of March 2007, he had to undergo a knee operation absconding him from the club for four weeks. He made two appearances for Chelsea and both the games were imminent. The Spanish club Real Madrid took interest in Chelsea Players that also included Robben. He signed a five-year contract with Real Madrid on 22 August 2007 with the transfer fee of 24 million Euros.

He debuted for Real Madrid on 18 September for a Champions League against Werder Bremen which they won with a 2-1 score. He had become an indispensable part of Real Madrid. Real Madrid won the league title successfully claiming the title of Champions of Spain. He was sold to Bayern Munich for 25 million dollars.

He was reluctant to leave Real Madrid but the club wanted to sell him. His made his debut for the Bayern Munich against Wolfsburg helping the team to win the 2009-2010 seasons. He had won his first Bundesliga title after a match against Hertha BSC. He was also named the Footballer of the year in Germany in the year 2010.

Arjen Robben's Net Worth And Salary

Arjen Robben's net worth is $80 million at present. He earns an annual salary of $7.5 million. He started his career from a Dutch-based professional club, Groningen and has played for clubs like PSV, Chelsea, Real Madrid, and Bayern Munich.  He signed a one-year contract with Bayern Munich on May 11, 2018, extending his stay until the end of the 2018–19 season.

Arjen owns a luxurious house in Germany worth millions. He also has a range of car collections. His collections BMW 6 Series Gran Coupe in which he likes to plan road trips along with his fellow companions. He also owns an Audi A5 2014 Luxury Edition – the iconic sports back from the German auto giant.

He got married to his high school girlfriend Bernadien Eillert (Spouse) in Groningen on 9 June 2007. They have three children together named Luka, Kai, and Lynn. Luka was born in 2008 and Kai was born in 2012. Their only daughter Lynn was born in 2010. Robben’s father is his agent.