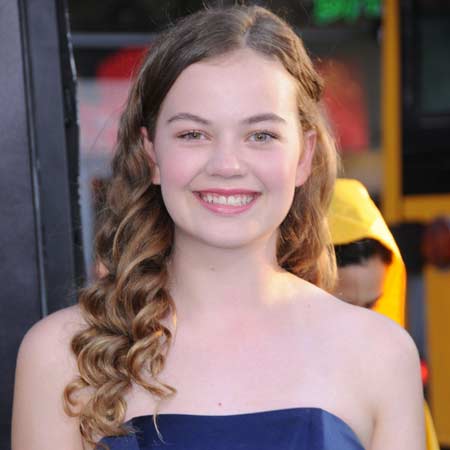 Canadian famed star, Megan Charpentier came into limelight after appearing as co-lead role of Victoria in 2013 English-language Spanish supernatural drama horror film, Mama, She won a nomination for Young Artist Award for Best Leading Young Actress for her role. Charpentier appeared in several movies, as well as a TV series, such as R.L. Stine's The Haunting Hour (2010), Resident Evil: Retribution (2012), and The Shack (2017) among others.

Megan Charpentier was born on 26th May 2001 in New Westminster, British Columbia under the birth sign Gemini. She belongs to Caucasian ethnicity and holds a Canadian nationality.

happy father’s day to the best pops a girl could ask for. I love you so much- thank you for believing in me

Megan Charpentier debuted in the entertainment industry from a commercial for Hasbro toy at the age of 3. She debuted in television, appearing in an episode of American-Canadian science fiction, Painkiller Jane as a Little Girl. The same year, she starred as Young Anita in an episode of the American sitcom, Aliens in America.

In 2009, Charpentier appeared on the big screen, playing the role of  Young Needy in an American supernatural horror dark comedy film, Jennifer's Body. The following year, she acted in two movies, Kid’s Court, and Frankie & Alice.

She was nominated for Young Artist Award under Best Leading Young Actress in 2013 English-language Spanish supernatural drama horror film, Mama as Victoria. She was cast along with Jessica Chastain, Nikolaj Coster-Waldau, and others.

In movie Red Riding Hood, she played the young version of Amanda Seyfried.

As an actress, Charpentier has not only gained a lot of fame but also a considerable amount of money at such a young age. As per some online sources, her net worth is around $1 million, but the exact amount is not public.

It is reported, Charpentier earns $25k for acting roles. Below are Charpentier's box office hit movies:

Charpentier has a Golden Retriver whose cost ranges from $500-$3000.

The young and talented actress, Megan Charpentier has won the hearts of millions of fans in a very short period of time from her acting in the movies as well as television series.

As of 2019, Charpentier is not dating anyone but is working on building her career. She is possibly single in the present days but was once linked with actor Alejandro Cuello.

Charpentier’s hobbies include Horseback Riding, Biking, and Soccer. She currently resides in Vancouver with her family.