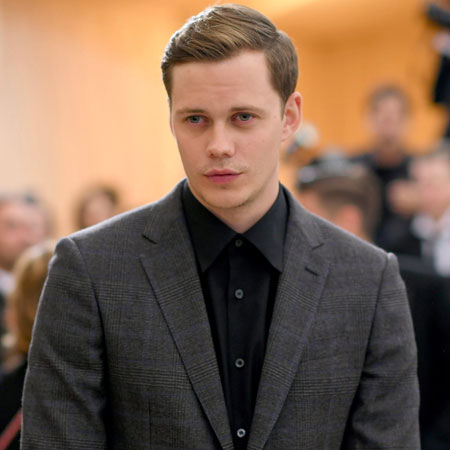 Swedish actor, Bill Skarsgård is well recognized for his roles in the 2017 adaption of It. His other popular work includes Hemlock Grove, The Divergent Series: Allegiant and Atomic Blonde. He is active in the field of acting since 2000, making debut from Swedish movie Järngänget.

Skarsgård is in a relationship with Alida Morberg.

Born Bill Istvan Günther Skarsgård on August 9, 1990, in Vallingby, Sweden, Bill Skarsgård is the son of actor Stellan Skarsgård and his first wife My Skarsgård, a doctor. He has seven siblings, Alexander (actor), Valter (actor), Gustaf (actor), Sam, Eija, Ossian, and Kolbjörn, the latter two his half-brothers from his father's second marriage with Megan Everett. He is Swedish and belongs to Caucasian ethnicity.

His father being an actor traveled continuously due to his work and always took his sons with him. When Skarsgård was 12, he lived for three months in Cambodia and then in Mexico. Living in different cities, dealing with people of different culture shaped Skarsgård to appreciated society and nature.

According to Bill Skarsgård, he was unsure of what he wanted to do, as three of his brothers had chosen acting following their father's footstep, and one became a doctor like their mother. Eventually, he also decided to become an actor after his role in 2008 movie Arn-The Kingdom at Road's End alongside his father and his brother Gustaf. However, before his role in that movie, in 2000, he had appeared in the Swedish thriller Järngänget along with his brother Alexander Skarsgård. Till Skarsgård was 18, he featured in two Swedish movies and a miniseries titled Pappa polis.

In 2010, Bill Skarsgård played the character of Eric in the miniseries Arn- The Knight Templer. The same year he starred in two Swedish movies Behind Blue Skies and Simple Simon. In 2011, he got the chance to act alongside famed Swedish actress Alicia Vikander. He won a nomination for a Guldbagge Award for his role as Simon in Simple Simon. In 2012, he won European Film Academy's Shooting Stars Award at the age of 21.

Bill Skarsgård gained international fans after his role as Roman Godfrey in the American horror series Hemlock Grove. The following year he featured on the cover of Hero, a bi-annual men's fashion and culture magazine. His father interviewed him for this issue.

His first major American film is The Divergent Series: Allegiant. Skarsgård's role as Pennywise the Dancing Clown in 2017 movie It was praised by the audience as well as the critics and is set to reprise the role in the sequel in 2019.

As of 2018, Bill Skarsgård acted in Assa s sination Nation and is set to appear as a regular cast member in Castle Rock.

Bill Skarsgård has acc u mulated an estimated net worth of $5 million from his career as an actor. Some of his hit movies that collected a good sum at the box office are:

His recent movie Assa s sination Nation which premiered at the Sundance Festival marked the biggest deal of this year as Neon and AGBO bought for global rights of it paying $10 million.

Bill Skarsgård is in a relationship with Swedish actress Alida Morberg, his girlfriend since late 2015. In July 2016, the pair were seen together for the first time in Toronto, but they had not confirmed being a pair. The following year of March they were seen in New Orleans which made it clear that they were dating.

Skarsgård refers to himself as homeless as he is always going to different places working in movies.