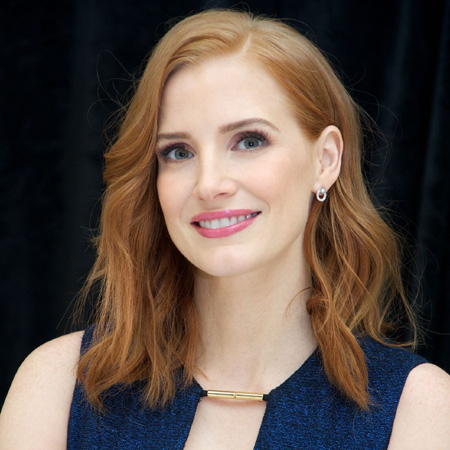 The American actress and film producer, Jessica Chastain is an award-winning actress who has gained widespread attention in 2011 for her work in ''The Help,' 'Zero Dark Thirty’, and 'Tree of Life.’ Jessica also featured in the films, Interstellar, Miss Sloane and A Most Violent Year as well.

The Golden Globe Award Winner, Jessica Chastain was born on Born on March 24, 1977, in Sacramento, California, United States. Regarding her nationality and ethnicity, Jessica is a White American.

Chastain is the daughter of a former vegan chef, Jerri Renee Hasty, and rock musician Michael Monasterio. She has two brothers and two sisters, sadly, one of her sister, Juliet committed suicide in the year 2003 following years of drug abuse.

The actress Chastain was brought by her mother and stepfather, a fireman, Michael Hastey in Sacramento. Jessica’s stepfather is the main source of inspirations as her father Michael was the first person to make her feel secure.

Chastain has also said regarding her childhood:

“I [grew up] with a single mother who worked very hard to put food on our table. We did not have money. There were many nights when we had to go to sleep without eating. It was a very difficult upbringing. Things weren’t easy for me growing up”

Chastain took an interest in acting when she was only seven years old and began performing in the productions of Shakespeare's works like Much Ado About Nothing.

Chastain attended the El Camino Fundamental High School in her hometown, Sacramento where she also struggled academically. As a student at the high school, she had not any friends and considered herself a misfit in school, finally finding an outlet in the performing arts.

Chastain later said in a quote as,

"I used to cut school to read Shakespeare, not to make out in the park".

However, Chastain did not qualify for graduation for too many absences during her senior year in school. She then attended Sacramento City College for a year from 1996 to 97. At the time, she was a part of the institution's debate team.

Chastain made her professional stage debut with a production of Romeo and Juliet as Juliet in the year 1998, in around the San Francisco Bay area. The production led her to audition for the Juilliard School in New York City, where she was accepted and a s sisted by the help of a scholarship established by the actor Robin Williams.

Chastain accomplished her Bachelor of Fine Arts from the school in 2003.

Following her graduation, Jessica Chastain performed in an acting showcase during her last year at Juilliard, in which the producer of The West Wing and ER John Wells also was attended. After that, the producer inspired by her stellar performance and signed to a talent holding contract with Chastain.

Chastain portrayed the character as a psychotic in the medical drama series, ER and the character also led to more neurotic characters for her. She also was active on the stage, while she worked in television and landed parts in ‘Wilde Salome’, ‘Othello’, and ‘The Cherry Orchard’ along with Michelle Williams.

Chastain began to focus her efforts on big-screen characters in early of 2008. In the year 2010, she portrayed the character of Stolen in John Madden’s dramatic thriller The Debt. The year 2011 is the most successful year for Chastain as she gained widespread attention after playing the critically-acclaimed role in highest-grossing and most acclaimed 2011 film, The Help featuring Viola Davis, Bryce Dallas Howard, Allison Janney, Octavia Spencer, and Emma Stone.

The film grossed over $100 million on its 21st day of release. It gained positive reviews and making $216 million in worldwide box office. For which, she also received several prestigious awards. The same year, she also featured in Coriolanus.

After a year, Chastain again made a breakthrough after featuring in the highest-grossing Madagascar film with a worldwide gross of over $746 million, Madagascar 3: Europe's Most Wanted. Jessica’s major role included in, Zero Dark Thirty, Mama, Interstellar, The Martian, A Most Violent Year and The Heiress as well.

The pair married in an intimate ceremony at Villa Tiepolo Pa s si in Carbonara in front of friends and family. As per sources the couple first met each other at the Paris fashion show and had a chit chat there.

Later on, they began dating after a few more meeting in the year 2012. In addition, The Take Shelter and The Tree of Life star, Jessica also was in a relationship with the Ned Benson. However, the couple didn’t last long and broken up in 2010.

Besides, the actress Jessica also quite active on social media, where she often posts her photo with her husband Preposulo. Currently, the couple is happily living together.

Jessica Chastain has earned a tremendous amount of money as she has featured in a number of hit and commercially successful movies including, The Shelter, The Help, Coriolanus, Madagascar 3: Europe's Most Wanted, Interstellar, and Miss Sloane as well.

According to Celebrity Net Worth, Jessica Chastain has an estimated a net worth of $12 million. She has featured in a several critically and commercially successful movies including The Help, Madagascar 3: Europe's Most Wanted, and many others. The Help, grossed a whopping box office collection of $216.6 million whereas its producing cost was only $25 million. She is 5 feet 4 inches tall.