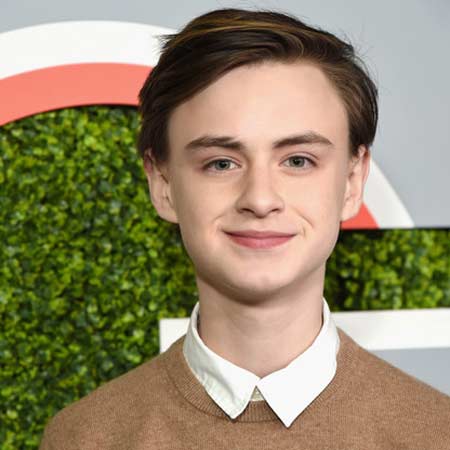 An Award-winning American actor, Jaeden Lieberher, is popularly known for his role, Bill Denbrough (leader of Losers Club) in the horror movie, It. He is also well known for his role in St. Vincent, Midnight Special, The Confirmation and The Book of Henry. In 2014, he portrayed his first major feature film role, Oliver Bronstein in St. Vincent. His performance in the movie helped him to receive a nomination for various prestigious awards.

Jaeden Lieberher was born on 4th January 2003 in Philadelphia, Pennsylvania under the birth sign Capricorn. Lieberher is the son of Angie Martell and chef, Wes Lieberher. He is oldest among his three half-siblings- Sydney, Jovi and Hayes Lieberher from his father’s previous relationship.

Happy Mother’s Day to all the incredible moms in the world. Love you mama!

Lieberher attended the Independent Charter School. When he was 8 years old, he along with his mother moved to LA. At the time, he was not expecting to pursue a career in acting.

Without any acting classes and experiences, Lieberher appeared in a commercial for Hot Wheelers followed by Liberty Mutual, General Electric, Google, Moneysupermarket.com and Hyundai among others.

Jaeden Lieberher made his acting debut in 2013 from the short film, Grief. The following year, he appeared in his first major film St. Vincent directed by Theodore Melfi portraying the role, Oliver Bronstein (ostracized who is bullied at his Catholic School).

Excited to have 2 movies out today... #theconfirmation with the awesome #cliveowen in select theaters and iTunes

He then worked in several movies like Playing It Cool, Aloha, and Midnight Special. Particularly, he is famous for:

Lieberher is also known for his role, Jaeden Lieberher (a stuttering leader of the Losers’ Club), in the supernatural horror film, It directed by Andy Muschietti. As of 2018, he is working in several post-production movies including The True Adventures of Wolfboy, Low Tide, and The Lodge.

In 2015, Lieberher made his TV debut in an episode of American Dad!. The same year, he worked as Johnny Masters in Showtime’s period drama series Masters of Sex with Lizzy Caplan, Michael Sheen, Caitlin Fitzgerald, and Annaleigh Ashford. He was associated with the series from 2015 to 2016 working in 11 episodes.

According to Celebrity Net Worth, Jaeden Lieberher has an estimated net worth of $4 million. As per some online sources, Lieberher earned the following salary from the movie It and its upcoming franchise:

Considering his talent and hardwork, there is no surprise that he has already accumulated millions at a young age.

Here is the list of his hit movies which made an impressive collection at the box office:

The young and talented actor, Jaeden Liberher is dating the US-based competitive dancer, Lilia Buckingham, but, the duo has not made their relationship official.

In the very short period of time, Liberher has won millions of hearts and is quite popular among girls. He is active on the social media and has an impressive fan following. As of 2018, he has over 2.4 million + followers on his Instagram.

Lieberher loves to spend his spare time with his family and friends. Besides, some of his hobbies are watching movies, partying and visiting.

Here is the video which shows Jaeden Leiberher's facts: