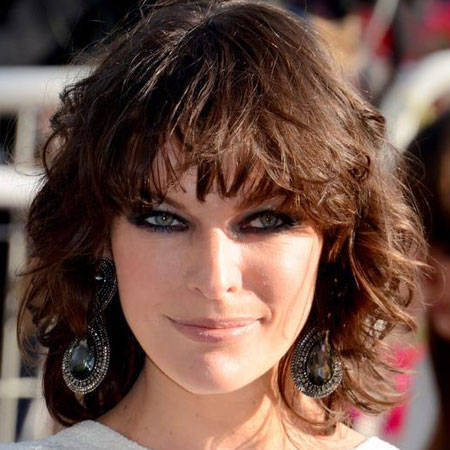 Milica Jovovich aka Mila Jovovich is most known for her praiseworthy film Resident Evil Trilogy. She is a Ukrainian-born Hollywood actress/model and musician who has appeared in numerous action and science fiction movies. In 2004, she was the Forbes’ highest-paid model in the world. She began modeling at a young age. She began acting in the mid 1985s. She has featured in several fashion magazines including Vogue, Elle, Revlon, and Cosmopolitan. She began landing small parts on television shows like Married…With Children and Paradise. She made her big breakthrough the role in Return to the Blue Lagoon in 1991. In 2018, she appeared in a science fiction film Future World. She has been married thrice. She is married to film director Paul W.S. Anderson since 2009. The couple shares two children together.

Milla Jovovich was born on 17 December 1975, in Kiev, Ukraine (in the former Soviet Union). She was born to father Bogdanovitch Jovovich and mother Galina Loginova Jovovich. Her father is a Serbian doctor and mother is a former Russian actress. Her family moved to Sacramento, California when she was 5. She attended Excelsior High School in Los Angeles. She has been working in America for a long period of time and is now an American Citizen.

She is of white ethnicity. She has always made her parents and family very proud and she is a darling in person. In all her interviews she has answered everything very humbly, and even after being so successful she is still very down to earth person.

She has not only been a successful actress but also a very good musician and model. She is a good designer as well.

She showed the signs of becoming a star from her early childhood but her early life was rather tumultuous. She became involved in drug use and credit-card fraud in her early days. But, she overcame her misdeeds and today she is proud of where she stands. She has played great roles in TV shows and movies and this has made her the star she is today.

At the young age of 11, she was featured on the cover page of the magazine, Lei( Italian magazine). After three years she made her movie debut after signing for the role in Return to the Blue Lagoon. Prior to this, he has appeared in several movies and TV shows.

Her most well-known performance till date has been in the movie series Resident Evil. Previously, she played the role of Samantha in a movie called Two Moon Junction in the year 1988. She also played the role of Lilli Hargrave in a movie called Return to the Blue Lagoon in the year 1991 and her amazing performance won millions of hearts all over the world.

She played the role of Maya Carlton in a movie called Kuffs in the year 1992 and critics also acclaimed her this role. Other TV shows and movies to her credits are Stone, Palermo Shooting, Dummy, The Claim, Bringing Up Bobby, The Night Train to Kathmandu and Paradise.

She has also been a part of a video game called The Fifth Element. She has some great albums and soundtracks to her name and some of them are The Divine Comedy, The People Tree Sessions and The Gentleman Who Fell. She has her own production company, Creature Entertainment.

Has $40 Million; Her House and Car

Ukrainian-born American model/actress, fashion designer Milla Jovovich’s net worth is $40 million as of September 2018. She earned $10.5 million in 2004 by her modeling career only.

She earns a huge amount of net worth from her career. Her films have earned over $2 billion at the Box Office. Her Resident Evil franchise only earned $1.235 billion.

What Is Milla Jovovich Relationship Status?

She has been married three times. She initially married actor Milla Jovovich in 1992. Their marriage ended in an annulment just two months later. She then moved to Europe with her friend and musician Chris Brenner where she began a relationship with filmmaker Luc Besson.

They lived together for two years and separated. In 1995, she began a relationship with director Luc Besson. In 1997, the couple tied their knot and went for skydiving directly after the ceremony. But, they divorced in 1999. From 1999-01, she was romantically linked to the young poet and musician Anno Birkin.

In 2002, she met director Paul W.S. Anderson on the sets of Resident Evil. In 2003, he proposed her but, the couple separated after sometimes. The couple later started living together. They welcomed their first child, daughter Ever Gabo at Cedars-Sinai Medical Center in Los Angeles, California.

After several years of affair, they tied their knot on 22 August 2009. Since then, the pair is living happily together. The couple welcomed their daughter Dashiel Edan on 1 April 2015.

She is a former smoker. She has advocated the legalization of cannabis and appeared in a spread and on the cover of High Times. She once admitted that her vices were cigarettes and cannabis.

She now practices yoga and meditation to live a healthy lifestyle. She described herself as a spiritual person. She also avoids junk foods. She prefers cooking during her leisure time. She also enjoys playing guitar and writing poems and lyrics for songs.

She married Paul W.S Anderson in the year 2009 and till now their relationship as husband and wife has been going pretty smoothly. As the couple is doing so well, there is almost no chance of a divorce to occur in their lives. She has already been pregnant twice and has two children.

She was taken great care of when she was pregnant and was going to have a baby. The names of her children are Ever Gabo Anderson and Dashiel Edon Anderson. However, this is not her first marriage as she has been married and divorced twice already with Luc Besson and Shawn Andrews.