Kaley Cuoco: Her Net Worth, Salary, Sources of Income, Awards and Assets 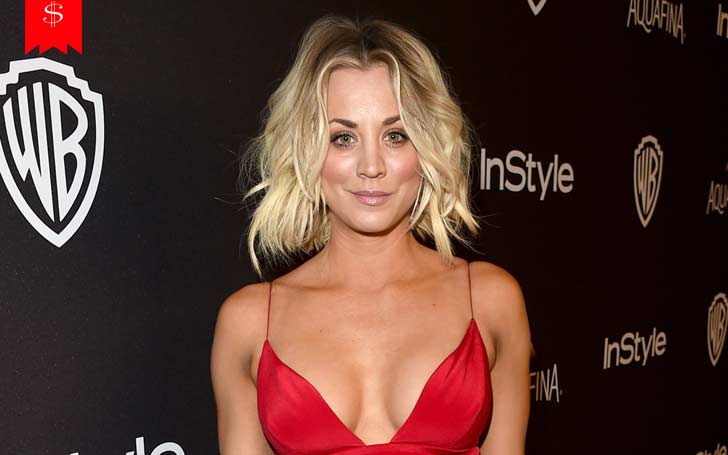 She is witty, she is beautiful, she is talented, she is none other than Kaley Cuoco. Cuoco is the American actress and producer best known for her role Penny in the hit sitcom Big Bang Theory. Besides, she also appeared in movies and tv shows like The Wedding Ringer, To Be Fat like Me, Why Him?, Harley Quinn, Brandy & Mr. Whiskers and so on.

Since fame comes along with wealth, Cuoco is one of the richest TV actresses. In 2017, she was ranked as one of the highest paid television actresses. How much is her current net worth? We have all their details here.

Kaley Cuoco's net worth is $55 Million in 2019. According to Forbes, she was the second highest paid television actress of 2017 with an earning of $26 Million. Sofia Vergara came in the first place with earning of $41.5 Million and third highest paid actress is Mindy Kaling with a worth of $13 Million.

According to Variety, "The Big Bang Theory" stars including Cuoco, Jim Parsons, Johnny Galecki, Kunal Nayyar, and Simon Helberg – who made $1 million per episode – agreed to the six-figure cuts so castmates Mayim Bialik and Melissa Rauch can get higher payment during the next two seasons of the CBS comedy. Bialik and Rauch now make about $200,000 per episode, so their pay would rise to $450,000 if the extra funds are split evenly.

She owns an impressive $2.795 million Mediterranean style house in San Fernando Valley California. The finely furnished house covers an area of 5,233 square meters and has homely and stylish designs. The backyard features a luscious green garden wall that protects a resort-style pool housed among the springy green grass.

Actress, Kaley Cuoco has selected, Mercedes-Benz SLS AMG GT as her rides which cost more than  $250,000 in US market. She also has a Range Rover which price starts from $177,000.

One of her major hobbies includes horse riding and she owns several horses. Her husband Karl Cook is a rider himself and the couple often competes at jumping in spare time. She often posts pictures of her horses on Instagram.

When I ride, I don’t just wear a helmet, I wear a Samshield @samshieldamerica The safest (and the most gorgeous) helmet on the market

She is also a dog lover and the pictures of her dogs can be often seen on her  Instagram page.

Along with her hobbies and passions, Kaley has also involved herself in charities and endorsements. Her endorsements and charities to different organizations and brands are given in the table below.

In her successful career, she has also received and nominated for many prestigious awards with has listed below:

After many supporting and short appearances in 1990's tv shows and movies, Cuoco landed her first major role in 2002 family sitcom 8 Simple Rules alongside John Ritter and Katey Sagal.

In 2007 she debuted in the role of Penny in the American sitcom The Big Bang Theory alongside Jim Parsons, Jonny Galecki, Simon Helberg, and Kunal Nayyar. She has also performed in movies including 2015's The Wedding Finger and Burning Bodhi, 2014's Authors Anonymous and 2011's The Last Ride.

Some of her 90's movies include 1995's Virtuosity, 1997's Picture Perfect, Drew Peterson Untouchable and many more. She also appeared as Sasha in 2007's Prison Break, 2006's Charmed as Billie.

Among all these, she has made enormous earnings from the salary of The Big Bang Theory.

Stay tuned with Article Bio for other celebrities news.