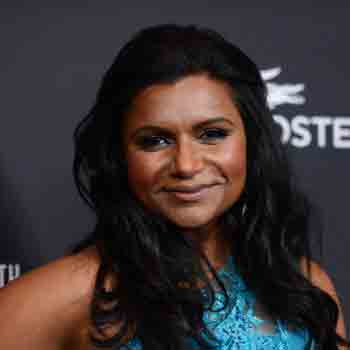 The amazingly funny and talented Mindy Kaling is an American actress, comedian, writer, and producer who is best known for her work as Mindy Lahiri on Fox’s The Mindy Project. She also gained a lot of popularity for her breakout performance in NBC’s The Office. For her role in the series, she also got an Emmy award nomination. Mindy is also a writer, director, and co-executive producer who reached to the peak of her career while she was still young.

Kaling's ingenuity has led Mindy to be noted as one of the 100 most influential people in the world in 2013. Mindy has also won a number of prestigious accolades like Screen Actors Guild Awards. Mindy is regarded as one of the best Creative Entertainers that Hollywood has ever seen. In the year 2018, Kaling played the character of Mrs. Who in the live-action Disney adaptation of the novel A Wrinkle Time.

Mindy Kaling was born as Vera Mindy Chokalingam on 24th June 1979 in Cambridge, Ma s sachusetts. Her father, Avu Chokalingam, is an architect and mother, Dr. Swati Chokalingam was an obstetrician/gynecologist who later died because of pancreatic cancer. Kaling was named Mindy ever from the time her mother was pregnant with her while living in Nigeria.

Mindy’s parents decided to move to the United States so they decided to change the American name for their daughter, and they like the name Mindy from the TV Series Mork & Mindy. As for the name Vera, both of her parents are of Indian origin so according to it the name referrers to the incarnation of a Hindu goddess. Mindy went on to graduate from Buckingham Browne & Nichols based in Cambridge, Ma s sachusetts in 1997.

Chokalingam then joined Dartmouth College where she became a member of the improvisational comedy troupe named “The Dog Day Players” and also the a cappella group “The Rockapellas”. While still in college, Mindy was an intern on Late Night with Conan O’Brien. In 2001, Mindy graduated with bachelors in Playwriting. Mindy portrayed Ben Affleck in a play called Matt & Ben in 2003 which was named by Time magazine’s “Top Ten Theatrical Events of the Year.

Mindy Kaling made her first film debut as character Amy in 2005’s The 40-Year-Old Virgin. Then in 2006, Kaling was featured on the CD Comedy Death Ray and she wrote for one episode of Saturday Night Live.a year after that Mindy appeared in Licence to Wed. In 2009, Mindy acted as a Smithsonian National Air and Space Museum tour guide in Night at the Museum: Battle of the Smithsonian. In the same year, Mindy voiced Taffyta Muttonfudge in Disney’s animated comedy film, Wreck-it-Ralph.

In 2011, Kaling appeared in No String Attached playing the character of Shira. In 2012 Mindy played the role of Vanetha in the romantic comedy film The Five –Year Engagement. Mindy has written a book as well named “Is Everyone Hanging Out Without Me?” which is a collection of essays about her early life and career intertwined with short observational essays about her friends, family, and relationships.

Apart from films, Mindy is highly noted for her TV series one of which is The Office. Mindy first joined the cast of The Office as a writer at age 24 and was the only woman staff of eight. Soon Mindy took on the role of character Kelly Kapoor. Mindy has written at least two dozen episodes including Niagara which won her a co-nomination for an Emmy Award with Greg Daniels. In a 2007 interview with The A.V Club Kaling described her character Kelly as

“an exaggerated version of what I think the upper-level writers believe my personality is.”

Kaling directed The Office webisodes The 3rd Floor and the season six episode “Body Language”, which marked Mindy’s television directorial debut. Mindy was nominated for five consecutive times for the Primetime Emmy Award for Outstanding Comedy Series as a producer of The Office. Mindy was the main role for Season 1-8 and Special Guest Star in Season 9.

Mindy’s contract was set to expire at the end of Season7 but on September 15, 2011, Mindy signed a new contract to stay with the show for Season 8 and was also promoted as a full Executive Producer. Mindy’s Universal Television contract includes a development deal for a new show (The Mindy Project) where she appears as an actor and contributes as a writer.

Eventually, in 2012, Kaling pitched a comedy to Fox titled The Mindy Project which was written by her and where she stars as Mindy Lahiri. Mindy has won many awards for The Mindy Project that includes Critics’ Choice Television Award for Most Exciting New Series in 2012, Gracie Awards for Outstanding Producer-Entertainment in 2013, and another Gracie Award for Outstanding Female Actor in a Leading Role in a Comedy in 2014.

Kaling posed for the cover of the November/December 2013 issue of Christian Lifestyle magazine RELEVANT. Entertainment Weekly acknowledged Mindy as one of the “50 Coolest and Most Creative Entertainers” in Hollywood in 2013. The same year, Mindy was noted by Time as one of the 100 most influential people in the World.

In the year 2018, Kaling played the character of Mrs. Who in the live-action Disney adaptation of the novel A Wrinkle Time sharing the screen alongside Helena Bonham Carter, Sandra Bullock, and Cate Blanchett.

Kaling also earned her honorary degree of Doctor of Humane Letters from Dartmouth College, on 10 June 2018.

Mindy Kaling has earned a hefty amount of net worth from her illustrious career. As per celebrity net worth, she has an estimated net worth of around $24 million, as of 2018. And according to the same source, her estimated annual salary is $150,000 per episode.

In 2013, Kaling purchased a mansion for $1.6 million. The house features three-bedroom which located in Los Angeles, California.

Mindy Kaling is yet to be married and is also not dating anyone officially at present. She was in on and off relationship with highly rated TV series The Office's star B.J. Novak. The two met for the first time on the sets of The Office. She and her ex-boyfriend Novak dated for a few years.

The actress gave birth to her daughter named Katherine Kaling on Dec 15, 2017. But the identity of the baby's father is still a mystery. On June 2017, multiple sources confirmed her pregnancy. She was also not dating anyone publically at the time of her pregnancy. She is also quite active on social media especially on her Instagram account with more than 3 million followers.

Mindy Kaling stands at the height of 5 feet 4 inches and weighs 130 pounds. Kaling has a perfect body shape with body measurements 35-27-36 inches. She has a black colored eye and dark brown colored hair.