Multitalented American film and TV actor, Jonathan Tucker made his Hollywood debut in the early 90s. The actor is most popular for portraying Tim Weiner in The Virgin Suicides and Morgan in The Texas Chainsaw Massacre.

Some of his other works include In the Valley of Elah and The Ruins. Regarding his TV career, he made his breakthrough in the TV series The Black Donnellys as Thomas ''Tommy'' Donnelly. Some of his other famous series include Parenthood and Kingdom.

Jonathan Tucker was born Jonathan Moss Tucker on 31st May 1982 in Boston, Massachusetts, under the birth sign Gemini. He is the son of a public relations and marketing analyst, Maggie Moss and a professor at the University of Massachusetts Boston, Paul Hayes Tucker.

His parents raised him with his sister, Jennie Tucker, in Charlestown, Massachusetts. Tucker attended The Park School in Brookline and later joined Boston Ballet, where he performed in the production of The Nutcracker. Later, he attended The Thacher School in Ojai, California. Further, the actor holds American nationality and belongs to the White ethnicity.

Tucker started his career in the movies from some early 90s movies like Troublemakers (1994), Two If by Sea (1996), and Sleppers (1996). Tucker's role, Tim Weiner, in the drama film, The Virgin Suicides was highly appreciated. He shared the screen with Kristen Dunst, Josh Hartnett, Kathleen Turner, and James Woods.

In 2001, Tucker worked in The Deep End, directed by David Siegel and Scott McGehee. His sex scene with Josh Lucas in the movie was considered his breakout role. He then worked in several movies like Ball in the House, Stateside, Criminal, Pulse, The Ruins, and Meskada.

Particularly, he is popular for:

Tucker also worked in other movies like In Texas Chainsaw Massacre, The Ruins, and The Next Three Days.

Tucker made his TV debut in 1997 in an episode of Early Edition. The following year, he played Rob Tennant in the TV movie Mr. Music. Later, he worked in several TV series like The Practice, Philly, Six Feet Under, and Masters of Horror.

Some of his other popular TV series include

For the role of Jay in the Kingdom, he worked hard to change his physique.

In 2018, Tucker was working as Major Craddock (a major in the Confederados army) in the science fiction western TV series Westworld with Evan Rachel, Anthony Hopkins, Thandie Newton and Ed Harris.

Tucker has an estimated net worth of $2 million. His major source of income is his acting career. The 5 feet 10 inches tall actor might be earning about $50 thousand per annum as an average salary.

Additionally, he has 273k followers on his Instagram account and his estimated earning per post is $825- $1375 as per Influencer marketing hub. The actor has enough money to lead a quality life with his family members.

He worked in several hit movies, and some of them include:

Tucker is the founder of a non-profit charity camp, The Pegasus Fund, for disadvantaged students in Los Angeles.

The camp’s mission stated, ‘’ The Pegasus Fund supplements the academic journey of top-performing students in underserved communities by sending them to summer camp as a means to help prepare them for the new geographic and social environments of the private secondary schools they plan to attend.’’

Tucker is married to Tara Ahamed. The couple tied the knot on 16th July 2012 at the main branch of the New York Public Library. His wife is a director of development of the production company Identity Films in LA. 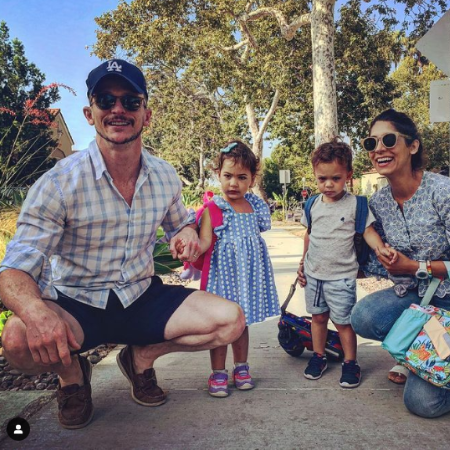 The couple rarely appears in public but, if we believe the sources, they share a very blissful relationship. The duo is blessed with two beautiful kids, a son, and a daughter.

The family of four has been captured by the media cameras on different occasions. Besides, the actor himself shares a glimpse of his happy family life.

Tucker shares a healthy relationship with his friends and family. He often shares posts with his co-workers also.

Here is the video where Tucker talks about the series Westworld: