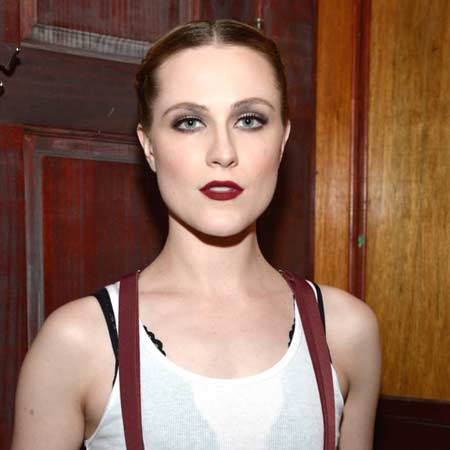 American actress and singer, Evan Rachel Wood's breakout role in the film Thirteen led to other notable projects such as Mildred Pierce and Westworld. Her performance in Thirteen rose her to stardom and also earned her a Golden Globe and Emmy nominations. She earned acclaim and gained further praise for her powerful performance as Stephanie in Darren Aronofsky's The Wrestler. She has been playing the character Dolores Abernathy in the science fiction thriller television series Westworld from 2016 and her performance in the series also brought her many prestigious accolades like Critics' Choice Television Award and Satellite Award. She is also notable for her work in Practical Magic, Down Will Come Baby, Profiler, and Once and Again.

Evan Rachel Wood was born on September 7, 1987, in Raleigh, North Carolina to Ira David Wood III, a theatre actor and writer, and Sara Lynn Moore, an actress and acting coach.  She was raised up in Raleigh along with her three brothers: Ira David Wood IV, Dana Wood, and Thomas Wood.

Wood is a devout Jewish. Her nationality is American and regarding her ethnical background, she has English, Irish, Scottish, and German ancestry.  Her mother is originally from a Christian family, converted to Judaism whereas her father is from a Christian background.

As a child, Wood was actively involved in several theatrical plays along with her brothers. When she was a mare one-year-old,  she appeared in the 1987 production of her father's musical comedy adaptation of A Christmas Carol. Her parents divorced in 1997 and following their divorce, she went to her mother's native Los Angeles County, California with her mother.

Wood joined high school in the San Fernando Valley but she dropped out due to the school's environment. Later on, she went on to study at Cary Elementary, a public school in Cary, North Carolina. Subsequently, she was home-schooled and earned her high school diploma when she was 15.

Wood landed a major role as Emily Lindstrom, an aspiring concert violinist, in Little Secrets, in  2002. And for her performance in the film, she was nominated for Best Leading Young Actress at the ‘Young Artist Awards. Her big breakthrough came in 2003 appearing in the movie Thirteen. The same year, she went on to feature in thriller movie The Missing sharing the screen opposite Cate Blanchett and Tommy Lee Jones.

Wood also appeared in several films and TV series including Asterix and the Vikings, Running with Scissors, The Life Before Her Eyes, Across the Universe, and Mildred Pierce. She played the role Sophie-Anne Leclerq in the hit series True Blood from 2009-11.

Wood portrayed the title character in the 2011 HBO miniseries, Mildred Pierce.  Her other works include The Conspirator, Charlie Countryman,  A Case of You, and Into the Forest.

Some of her successful series are listed below,

Music And Other Appearances

In 2012, Wood sang I'd Have You Anytime which included in the fourth CD of Chimes of Freedom: The Songs of Bob Dylan Honoring 50 Years of Amnesty International, a compilation production for the benefit of the organization. She is also an active member of the Rebel and a Basketcase, an electro-pop duo formed with multi-instrumentalist Zach Villa, in 2016.

Evan Rachel Wood has played a number of significant roles in both film and television. And from her career, she has also made a large amount of money which as per Celebrity Net Worth is around $8 million.

Wood has been a part of her several commercially successful movies some of them are listed below,

Evan Rachel was involved in a relationship with the British actor Jamie Bell in the year 2005. The couple featured together in the music video for Green Day's song "Wake Me Up When September Ends. The both inked the letter J on their left ankle. The relationship between them ended in 2006. Talking about her love with Jamie, she stated

"We had matching tattoos because we knew our love would last forever. Trouble is, it didn't, things happened, we split. But I don't regret the tattoo. It reminds me of a great, great period in my life."

Along with her boyfriend Manson, Wood also appeared in the video of Heart-Shaped Glasses. She also became the highest paid actress in music video history for her appearance in the video. Despite sharing a loving relationship, they parted ways in 2008. It was reported at the beginning of 2010, that the couple again reunited and the two also got engaged to be married.

But they called off their engagement in August 2010. The following year, she disclosed being a bisexual via Twitter and talking regarding her sexuality in an interview with Esquire, she said,

Wood announced in the summer of 2011, she rekindled her relationship with Jamie Bell. The couple tied the knots on October 30, 2012, in a small ceremony. They welcomed their first child, a son, born in July 2013. However, the couple separated after 19-month of marriage.

Following their separation, Wood went on to date The L Word actress Katherine Moennig. And then, was involved in a relationship with her Rebel and a Basketcase bandmate, Zach Villa and got engaged in January 2017.

Nonetheless, they broke their engagement in September 2017. As of now, she is enjoying her single life after multiple failed affairs.

Besides, the versatile actress loves to sing, swim, and rollerblade. She enjoys horseback riding and a lifelong avid fan of David Bowie. Her favorite actress is Cate Blanchett and actor is Gene Wilder. She has a black belt in tae kwon do.

In an interview with Rolling Stone reporter, Wood claimed that she was raped twice many years ago. But she has not revealed the name of the culprit. She testified in front of the United States House Judiciary Subcommittee on Crime, Terrorism, Homeland Security, and Investigations claiming herself as a rape survivor and survivor of sexual abuse.