From Kylie Jenner's Lips To Kim Kardashain's Hairline, Here Is The List Of Most Notable Plastic Surgeries Of Kardashian-Jenner Clan 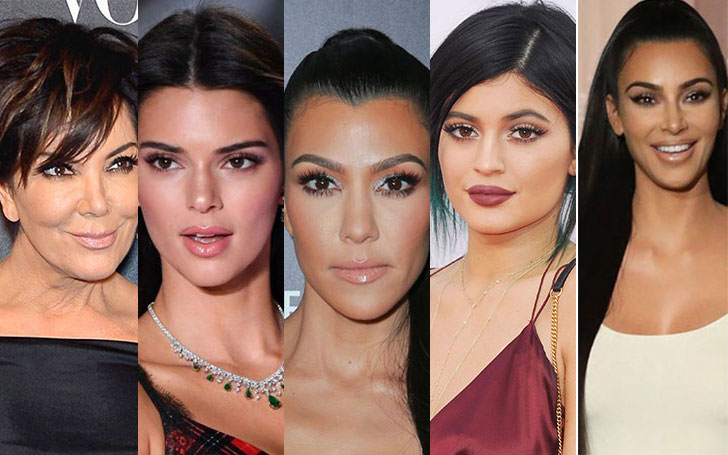 The well-known family, Kardashian-Jenner clan who rules the entertainment industry through their reality shows, rumors and controversies are most famous for their beauties.

While there are no doubts that they count as one of the beautiful girls in the world, they are often criticized for going through plastic surgery.  Today we are here to discuss the most notable surgeries of these reality queens.

"People think I've had my nose done. I haven't, It does look smaller. Maybe it's the contour I use," Kim Kardashian told Wonderland magazine in 2016.

Kim drastically transformed her look since she first entered to the stardom. She underwent Botox surgery and re-sculpted her hairline.

In a recent interview, she admitted that she gets an injection on her bum. She added that it is not to make those bigger, it is just to treat her skin complaint.

Interested Topic: Kim Kardashian West And Kanye West Are Married for 3 Years And Happily Living With their Children

Khloe Kardashian reinvented her looks and her face changed from round to oval in mere years.

She transformed herself from chubby teen to a stunning woman.

As per sources, Khloe decided to adopt a healthier lifestyle after her divorce from Lamar Odom in 2016. She lost 40 lbs baby fats which can be clearly seen through her shaped cheekbone and pout on her cheek.

She, however, denied of going under the knife and stated:

“I’m proud for losing weight when I wanted to and I’ve never resorted to surgery."

You May Also Like: Khloe Kardashian Rekindles With Tristan Thompson-Spotted Together Second Time In A Week

Like a fine wine, Kourtney Kardashian is getting better and stunning with her age. Taking about her surgery, in 2015, she revealed that she got a breast implant back in her college days.

Discover: Back together but dating different people? What's up with Kourtney Kardashian and Scott Disick?

Kris Jenner is a matriarch of the family who is now 63, as of 2019, but has never looked beautiful as now with few touches on her face and some surgeries in 2011.

She claims to have done her chin remake but her eyes, lips, and nose were untouched. She revealed that she went under the knife during one episode of Keeping Up with the Kardashians.

Later, the iconic momager also admitted that she has done hip surgery and laser treatments.

Don't Miss: Kris Jenner Worried about her Grandkids, Find Out Why Also Information About her Married Life and Husbands

Numerous audience and viewers have seen the transformation of Kendall Jenner from a sweet little girl into a breathtaking top model.

Kenny claims she is the classic natural beauty of her family. Although few people still don't believe her because past few years her face seems to look plumper and angular, lips turned puffier.

As a matter of fact, the catwalk queen stated on social media either she has undergone or not. She revealed:

"It's all so exhausting. As a model, why would I have my face reconstructed? It doesn't even make sense. It's crazy because sometimes I feel like people just want me to lose."

The youngest and 'the richest' member of the family, Kylie Jenner, 21 years old, is the one who changed most out of all the members. She grew up to the public eyes at a young age.

At the age of 17, Kylie came made headlines due to her pumped up lips. At that time she proudly claimed that it was purely her makeup skills.

Later, she admitted that she used lip fillers. She added her opinion about plastic surgery, saying:

“I’m not against plastic surgery.  I’ve only been under once before. If, down the line, I get to a point where I’m really uncomfortable with something on my body, I’m not against changing it.”

Also See: Kylie Jenner Names Her Daughter Stormi. See What her Fans Have To Say About It