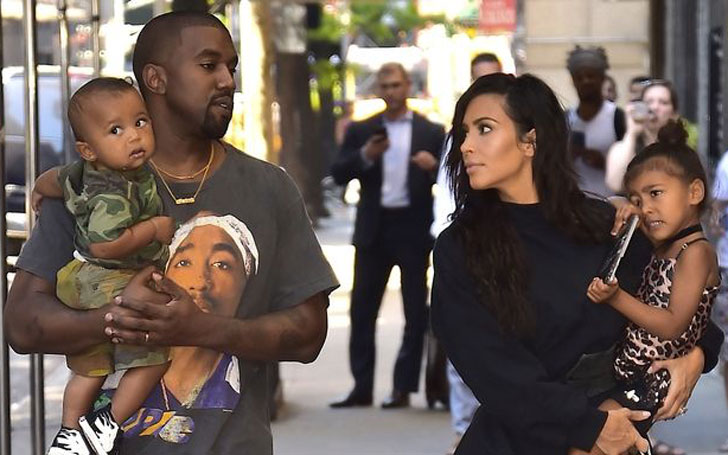 When it comes to Kardashian/Jenner clan, everything is possible. From possibly being pregnant at the age of 20 to building an empire for themselves, they always manage to make their fans go gaga about them.

And we probably wouldn’t know about them at first place if it wasn’t Kim Kardashian and her leaked sex tape with Ray J.

From being in a relationship with Ray J to getting married to Kanye West, Kim has definitely come a long way in her life. So how is the married life of the Kim Kardashian and Kanye West aka Kimye going on? Let’s have an inside look.

Kim Kardashian and Kanye West got married on May 24, 2014, and they are probably one of the most popular couples at present.

Though there was a big rumor that Kim was ready to leave Kanye as he couldn’t manage time for his family after Kim was robbed in Paris. But that didn’t happen and it seems that they aren’t the couple who just leaves each other because of some differences.

Though Kanye isn’t seen in keeping up with Kardashian all the times like Kim, Kortney, Khloe and Kris, the relationship between Kim and Kanye is going great as they even celebrated Kim’s birthday away from their families and even threw a lavish Baby shower for baby number three.

Well, this is no surprise to Kim’s followers that she is a mother of two and their baby number three is on the way to be a part of Kardashian/ West family.

Kim Kardashian with husband Kanye and children North and Saint

Also, Kim stated that she liked Kanye and had been talking to him even before she was married to Kris Humphries.

Right before I got married to Kris Humphries we were talking and I just went a different direction. I think I had to go through that to figure out what I wanted.

Though they were good friends for many years, little did Kim knew Kanye was into her.

I just knew I wanted her to be my girl for a long time. I remember I saw a picture of her and Paris Hilton, and I remember telling my boy, 'Have you seen that girl Kim Kar-dijon?

Also, many of you might not know this fact that Kanye didn’t have a cell phone until he knew that Kim was on the Internet and he wanted to call her.

Kanye even admitted in many of his interviews that the first time he saw Kim he wanted to marry her and undoubtedly their relationship seems like today’s Shakespearean tale that is filled with drama, grandeur and a string of complex family relationships with which they have managed to create a wonderful family for themselves.

Kim probably wouldn’t be this famous if it wasn’t her leaked sex tape with Ray J.

Kim and Ray J’s romance started in 2003 and ended in 2006. The couple made a sex tape during their dating period which was leaked after they ended their relationship.

Kim Kardashian and Ray J back in 2004

As believed, adult entertainment company Vivid was paid a million for the tape and after knowing that Kim sued the company for leaking that tape, they eventually settled for $5million.

According to company’s co-chairman

We are pleased that Kim has dropped her legal action against us, we met with her several times and finally reached a financial arrangement that we both feel is fair.

Well, before that, she was married to Doman Thomas, music producer, in 2000 but later she credited her separation to physical and emotional abuse on his part.

How can we forget Kim’s bodyguard boyfriend, Shengo Deane? Deane was seen having a fling with Kim and that they just couldn’t take their hands off each other.

In May 2011 she got engaged to NBA player Kris Humphries and married a few months later on August 20.
Unfortunately after 72 days of their marriage, Kim filed for divorce from Humphries on October 31 citing irreconcilable differences.

Many of the outlets surmised that their marriage was just a publicity stunt and that they did it in order to increase the TRP of their reality show Keeping Up with the Kardashian.

Remembering the epic rumor of all times,  Kim Kardashian was once rumored dating Cristiano Ronaldo. Well yes, this was a huge news back in 2010 and if you believed the sources they were kissing and seemed very affectionate.

In the words of the sources

She and Ronaldo were kissing and very affectionate.

They looked to be getting on really well, laughing the whole time.

Well after all the wait, when she became single in 2012, Kim made her first move and said

I think it was six months after I was newly single in like 2012, I was like why not? Like, what am I waiting for? 'I called [Kanye] because I'm sure it was really hurtful that I got married and, even though it's not like we communicated all the time, I knew what he was thinking.

Just like they say, you have to kiss a lot of frogs before you find your prince.