Melissa Rauch Net Worth 2018-How Much Money Does She Make From The Big Bang Theory? Her Income Sources And Lifestyle 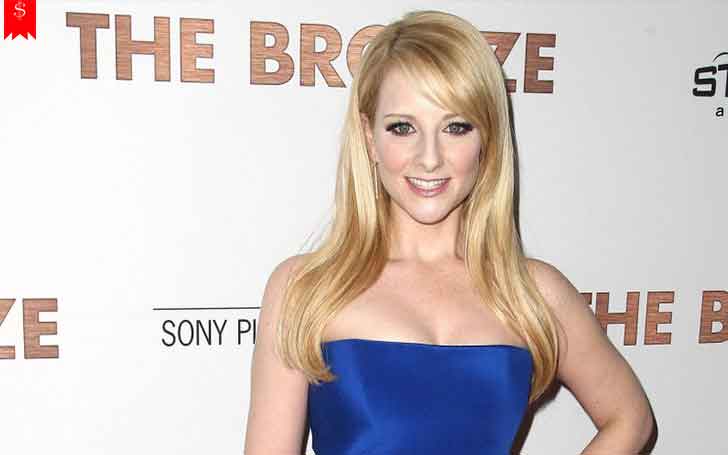 Best known for her appearance in the popular American television sitcom The Big Bang Theory, Melissa Rauch is enjoying a flourishing acting career. As a star of one of the highly-rated television shows, how much the actress has earned? How much is her net worth?

How is the Lifestyle of the talented actress and comedian Rauch? How did she come into the limelight? Today, on deck, get to know everything about Melissa Rauch's professional career, sources of income, and quick facts right below:

Melissa Rauch's Net Worth And Sources of Income

Melissa Rauch is one talented and successful American actress. From her prosperous career of over a decade, she has managed to earn an impressive net worth. As per the Cheat Sheet, Rauch has an estimated net worth of $8 million. But according to The Richest, her total income is $6 million.

Rauch grew her interest in acting during her high school days at Marlboro High School. She debuted her professional acting career in the 2006 movie Delirious. She portrayed the role of Megan.

In 2009, the star was cast in a recurring role of Dr. Bernadette Rostenkowski Wolowitz in an American television sitcom, The Big Bang Theory. The show later became the signature one for her giving her wide recognition all around the world. Now she is one of the leading stars of the sitcom.

We're back on Thursdays! Check out an awesome new @bigbangtheory_cbs tonight!

The hardworking actress and comedian Rauch was earning $60,000 per episode in the 7th season of The Big Bang Theory. As she became one of the lead stars of the show, the actress, now is getting a high deal of approx $500,000 from season 11.

However, the five lead actors of the show Johnny Galecki, Kaley Cuoco, Jim Parsons, Kunal Nayyar, and Simon Helberg were earning a whopping amount of $1 million per episode before they agreed to cut $100,000 to raise the salary of their co-stars Rauch and Mayim Bialik.

The comedian has given her voice in many movies and television series. For films, Rauch's voice over in Ice Age: Collision Course (2016) as Francine and in Batman and Harley Quinn (2017) as Harley Quinn. She is the voice of Fairy Tizzy in Sofia the First (2015), The Wasp in Marvel's Ant-Man (2017), and others.

Besides from her marvelous acting career, the gorgeous actress is earning attractive money from the brand endorsement of Jimmy Choo.

The Big BangTheory actress Melissa Rauch is blessed with a successful professional and personal life. However, she preferred to lead a healthy life rather than the celebrated one. So far, the celebrity is enjoying her simple lifestyle to the fullest.

She is living a blissful life along with her beautiful family. Rauch is happily married to her husband, Winston Rauch (Beigel), for over a decade now. Following a miscarriage, the adorable couple was blessed with a baby girl named Sadie Rauch.

The comedian prefers to maintain a low key personal life, and she is not so active on social media. At the moment, the diva is busy with the last season of The Big BangTheory.

Melissa leads a lavish lifestyle living in an extravagant mansion and driving expensive cars. She is seen wearing branded clothes and using the latest gadgets.