Garland Award winnerKunal Nayyar, a British Indian film, theatre and television actor's popularity took off after his debut role as Rajesh Koothrappaliin the CBS sitcom The Big Bang Theory.  In 2015, he ranked third in the World's Highest-Paid TV actors after the hit TV series The Big Bang Theory. He is also popular for voicing the character Vijay in Sanjay and Craig.

British-Indian actor Kunal Nayyar was born on April 30, 1981, in London, England, UK. However, he grew up in New Delhi, India. He is the son of the Punjabi Indian parents, Rakesh Nayyar andHeita Nayyar.

He attended St. Columba's, an elite boy's school in New Delhi, where he played badminton for the school team. Nayyar described his early years to Open magazine, saying that,

In school, I was busy playing badminton and chasing girls. I hated studying and only wanted to play sports.

In 1999, he moved to the United States to attend the University of Portland, Oregon to get a Bachelor of Science degree in Finance. After participating in the American College Theatre festival he determined to become a professional actor. He then received a Master of Fine Arts in Acting from Temple University in Philadelphia, Pennsylvania.

Nayyar began his career in the acting industry in 2004. After completing his graduation, he started working on American television ads and plays on the London stage. In 2006, he gained a breakthrough in the US for his role in the West Coast production of Rajiv Joseph's Huck & Holden.

The same year, Nayyar teamed up with Arun Das to write the play Cotton Candy which launched in New Delhi.  Then in 2007, he was cast in the sitcom The Big Bang Theory where he plays astrophysicist Rajesh Koothrappali alongside Jim Parsons, Kaley Cuoco, Sara Gilbert, Johnny Galecki, and Melissa Rauch among others.

In September 2015, Nayyar published a book named Yes, My accent is Real which was related to his career journey.  In 2016, he voiced Guy Diamond in the movie Trolls and also give a cameo in the TV series Ice Age: The Great Egg-Scapade as Gupta.

Talented and handsome Nayyar is very popular for his role as Rajesh Koothrappali in The Big Bang Theory. As per Forbes, he was the third on the list of World's Highest-Paid TV Actors for 2015, tied with co-star, Mark Harmon and Simon Helberg with earnings of $20 million after The Bing Bang Theory.

Nayyar has an estimated net worth of about $45 million and salary $800 thousand per episode as per the Celebrity net worth. He has collected his net worth from his involvement in the cinema business.

Nayyar is a married man; tied the knot with Miss India 2006 winner, Neha Kapur in December 2011. They are living a happy married life and there are no rumors regarding his personal and professional life. However, there were rumors that the couple is expecting their first child. 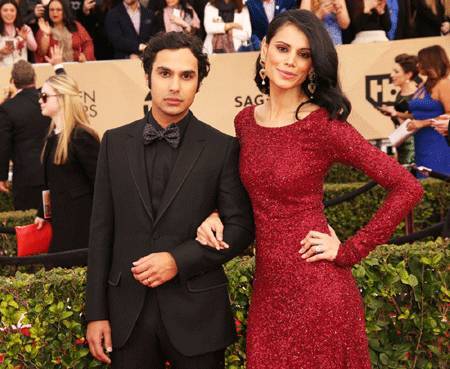 Besides acting, his hobbies include writing, dancing and playing golf.

Here is an interview with Kunal Nayyar.