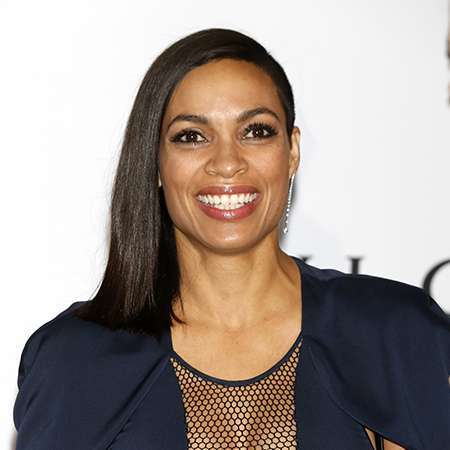 Rosario Dawson is one of the talented American actresses who has appeared in numerous movies and television series. She made her feature film debut in 1995 in an independent movie, Kids. Her performance in several movies and TV series helped her to get nominated for several awards and won some of them as well.  Regarding her personal life, she had an affair with a number of guys in her past. She has adopted a girl in 2014.

Rosario Dawson was born Rosario Isabel Dawson on  May 9, 1979, in New York City, New York, the United States under the birth sign Taurus. Dawson is American as per nationality and as far as her ethnicity is concerned, she is a mix of Afro-Cuban, Puerto Rican, Irish and Native American.

She was born to Isabel Celestine (mother) and Patrick C. Harris (father). Her biological father, Patrick Harris, was never part of the picture. Her construction worker stepfather, Greg Dawson, helped to raise Dawson from birth.

Dawson and her younger sibling brother, Clay Dawson, had it hard while growing up and was cared for by family members, most of whom were poverty-stricken and some of whom were H.I.V.-positive.

Dawson's upbringing was anything but traditional. At the age of 6, her family became squatters in an empty building because they couldn't afford rent, and this living situation would continue for years for the future actress and her family. She got her education from the Lee Strasberg Institute.

At the age of 21, she moved to an abandoned building on the Lower East Side of Manhattan.

At the age of 15, when Rosario Dawson was hanging out with friends in front of her building when she caught the attention of director Larry Clark. Dawson played a sexually promiscuous teen in the gritty tale about urban youth. Though the film's subject matter was shocking to audiences and critics alike, the actress's performance was a standout that set her showbiz career in motion.

Dawson's unique multicultural background and acting talent, along with training from the Lee Strasberg Institute, helped her from being typecast in Hollywood.

Dawson landed her first feature-film role as Ruby in an independent coming-of-age film, Kids starring Leo Fitzpatrick, Justin Pie, and Chloe Sevigny. She then worked in Josie and the Pussycats, based on the popular 1970s cartoon of the same name.

More roles followed in bigger productions, including Men In Black II, Sin City, Eagle Eye, and Unstoppable. Some of her movies credit Cesar Chavez; the Sin City sequel Sin City: A Dame To Kill For; and the Chris Rock comedy Finally Famous. Dawson is known for never straying far from her indie roots by continuing to do such low-budget flicks as Clerks II.

As of 2018, Dawson voiced Jolene in the upcoming movie, Henchmen. She is also working on the movie, Someone Great.

Dawson made her TV debut in 2003 in MTV's reality series, Punk'd. She then appeared in several TV series and TV shows in a minor role which includes Gemini Division, Saturday Night Live, and SpongeBob SquarePants.

As of 2018, she is working in several TV series, Daredevil, Jessica Jones, Luke Cage, and Iron Fist as Claire Temple. Since 2018, she is appearing in The CW's romantic comedy-drama, Jane the Virgin with Gina Rodriguez, Andrea Navedo, and Justin Baldoni.

Rosario Dawson has been nominated for several prestigious awards and won some of them as well. Here is the list of her won awards:

In addition, she was honored with the Community Service Award in 2013. Some of her other nominated awards include Teen Choice Awards, Online Film & Television Association Awards, MTV Movie Awards, and Critics' Choice Movie Award.

Rosario falls on the list of richest black actresses from all around the globe. As of 2019, Rosario Dawson's net worth is reported to be around $16 million. She earns an impressive amount from her career. She worked in several movies which made a good amazing collection at the box office.

She has helped fundraise for the Lower Eastside Girls Club which is located where she grew up and launched Voto Latino to get the Latino youth active in the political process. Dawson also spoke at the 2009 National Conference on the Primary Prevention of Men's Violence Against Women in Washington, D.C., and served as the honorary host of the fourth annual "Our Voices: Celebrating Diversity in Media" event at the White House Correspondents' Dinner in 2013.

Like many other actresses, Dawson has made headlines for her love life. She had an affair with several guys including  Joshua Jackson, Sex and the City's actor Jason Lewis (whom she lived with for several years), singer Jay-Z and director Danny Boyle among others.

In 2013, rumors circulated that she has been dating actor Michael Fassbender. In addition to acting, Dawson is known as a passionate political activist, devoting her time to making a difference in the world.

Dawson also dated Daredevil star, Eric Andre. Andrew announced their relationship on Valentine's Day 2017 by posting a picture together.  But the relationship did not last long and the couple broke up on 30th November 2017.

Here is the video where Dawson talks about her affair with Eric Andre:

Dawson is not married yet and has no children of her own but she adopted a 12-year-old girl in 2014.