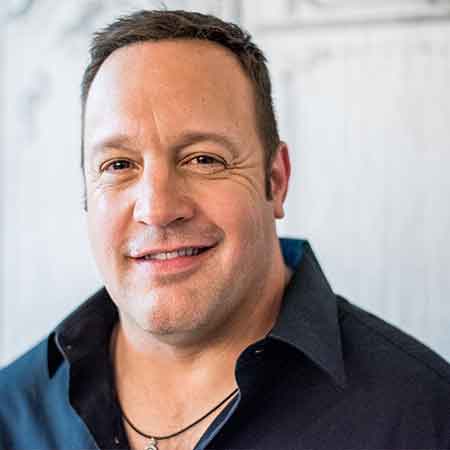 In the late 80s, the New York-born Kevin James stepped into an entertainment career as a stand-up comedian-  a regular in comedy circuits. But it was after his on-screen debut as Doug Heffernan in the series Everybody Loves Raymond (1998-999), the American actor would land into TV lead roles in The King of Queens (1998- 2007), Kevin Can Wait (2016-18), and The Crew (2021).

Thus, with a prolific career spanning more than 3 decades, James named himself among veteran figures & has since got hands into screenwriting as well as producing. The Primetime Emmy nominee is the father of 4 children with his wife of 16 years, Steffiana De La Cruz.

Who Are Kevin James' Parents? Age and Height?

Kevin George Knipfing (birth name) grew up in a Catholic norm with an older brother Gary Joseph Knipfing, who is also a renowned comedian/actor, and a younger sister named Leslie Knipfing. An American by nationality, the Hitch actor has a diverse ethnic background (German, Russian Jewish, Italian, & Turkey/Greece ancestry).

The State University of New York alum started his career as a stand-up comedy in 1989, making his debut at the East Side Comedy Club on Long Island. He rose to fame after appearing in the various talk shows, including Late Night with Conan O'Brien, Dennis Miller Live,  The Rosie O'Donnell Show, The Ellen DeGeneres Show.

James starred in commercials for Mazzio's Italian Eatery. In 2001, he did his own stand-up special,  Kevin James: Sweat the Small Stuff.  He got his first television job in 1991 on The New Candid Camera and then hosted the MTV sports game show SandBlastfrom 1994-96.

Later, James moved to Los Angeles in search of better opportunities. He guest-starred on a few episodes of Romano's hit CBS sitcom, Everybody Loves Raymond. In 1998, the New York native got his major role as Doug Heffernan in the CBS sitcom, The King of Queens until 2007, sharing the screen with Leah Remini, Lisa Rieffel, Patton Oswalt, and Larry Romano.

From 2016 to 2018, Kevin James appeared in the lead role of Kevin Gable in the TV series Kevin Can Wait. In 2018, he released a stand-up special on Kevin James: Never Don’t Give Up which aired on Netflix.

Most recently, he worked in the streaming comedy TV series The Crew (2021, 10 episodes) co-starring Jillian Mueller and Freddie Stroma.

Did you know? In 2007, he was the grand marshal for the Pepsi 400 ad which was popular for its NASCAR commands, "Gentlemen, start your engines".

Kevin James is one of the highest-paid stand-up comedians and has gathered a handsome sum of money throughout his career. According to Celebrity Net Worth, James has a whopping net worth of $100 million as of 2021. Back in 2020, his fortune recorded at $80 million.

Reportedly, from the TV series The King of Queens, the Emmy-nominee was earning $300,000 per episode, which rose up to $400,000-an-episode for the finale. In addition to that, Kevin was the executive producer of the series that saw him backend equities along with $50 million from syndications.

Currently, the Grown Ups 2 star lives in Delray Beach, Florida, in their six-bedroom oceanfront estate which he bought in February 2021 for a jaw-dropping $14 million, around a million dollars less than its asking price of $15.95 million.

But, it's not the actor's first property in the area. With his wife Steffiana, Kevin dropped $18.5 million in 2012 for their another Delray Beach mansion- just a few blocks away from his recently bought (in 2021) property. Moreover, the duo, in 2013, added an empty lot next door of aforementioned property for $4.25 million before the whole estate spanning 3-acre was put on the market in 2016 for $29 million.

His first comedy series, “The King of Queens,” was nominated for an Emmy Award in 2006. James was ranked #89 on Comedy Central's list of the 100 Greatest Stand-Up Comedians.

Moving towards the relationship status of Kevin James, he is a  married man. He has been married to renowned actress Steffiana de la Cruz who is best known for her roles in Eddie Money, Damned Yanky, Black List, and Affair Trade.

Kevin and Steffiana first met on a blind date arranged by his interior decorator, and eventually started a romantic relationship.

After dating for several months, the couple tied the knot in an intimate ceremony in California on June 19, 2004. Nearly 180 guests, including close friends and family members, attended the wedding.

James shares a good bonding with standup comedian, Ray Romano who is a member of the Pi Lambda Phi fraternity.

Kevin is an avid Instagram (@kevinjamesofficial) and Twitter (@KevinJames) user with more than 1.7 million followers and 456.6K followers respectively in 2021.