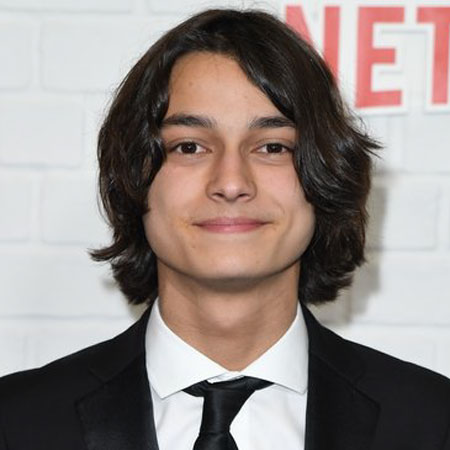 American actor, Rio Mangini is also a musician and a composer. From a very early age, he used to play the piano and was considered a prodigy. His skill helped him to win several titles and awards.

Mangini is well recognized for his roles as McQuaid in Netflix's web series, Everything Sucks! and as Ace McFumbles in Bella and the Bulldogs. He is also popular for his roles in Teen Wolf and Bitch. He made his Hollywood debut in 2012 from the short film, Six Letter Word.

As of 2019, he is working in the movie, Reach and TV series, Guess Who Died and Everything Sucks!.

Rio Mangini was born on 6th October 2002 in Los Angeles, California under the birth sign Libra. He is American as per nationality and ethnicity wise, he is White. He is the son of the Academy Award-winning sound designer, Mark A. Mangini(father) and  Ann Mangini(mother).

From a very early age of five, he started playing the piano and due to his exceptional skills he was considered a prodigy. He joined The Colburn School of Performing Arts learning piano.

At the age of 8, he placed first in 2011 Cypress College Competition and the same year he also competed in the American Protégé International Piano Strings Competition.

He signed a contract with the Abrams Artist Agency after which he performed on Carnegie Hall. He was also awarded Young Artists Awards in the category of an outstanding instrumentalist.

Later, he developed his interest in acting and joined several acting cla s ses. Mangini gave his first audition for a role in Mrs. Pooper's Penguin.

Rio Mangini made his Hollywood debut in 2012 at the age of eight from the short film, Six Letter Word. The following year, he appeared in another short film, Pizza Bear Delivery Challenge.

In 2014, Mangini shared the screen with Doris Roberts, Jet Jurgen Meyer, Jenna Ortega, and Drew Justice in the direct-to-video comedy film, The Little Rascals Save the Day.

His other works include Super, The Imbalancing Act, and La s so & Comet. In 2017, he worked in the movie, Bitch with Marianna Palka, Jamie King, Jason Ritter, and Brighton Sharbino.

As of 2018, he is worked as Leo in the movie, Reach currently in post-production. The same year he appeared in the movie, Lethal Weapon starring Mel Gibson, Danny Glover, and Gary Busey, among others. He also appeared in an American live-action family TV series, Just Add Magic and starred in the Netflix comedy-drama series, Everything Sucks! in 2018.

Mangini made his TV debut in 2013 from science fiction slapstick comedy TV series, Marvin Marvin created by Jon Ross and Jeff Bushell. The same year, he worked in several TV series, What If, Kickin' It, Pizza Bear Delivery Challenge.

In 2016, he worked in TV series, Teen Wolf with Dylan O'Brien, Tyler Posey, Holland Roden, and Tyler Hoechlin. His other works include Good Luck Charlie, Switched at Birth, Finders Keepers, General Hospital, Letha; Weapon and Just Add Magic among others.

CAPTION: Rio with the casts of Everything Sucks!. SOURCE: Instagram

Particularly, he is famous for:

As of 2018, he is working on Everything Sucks! and will appear in the TV series, Guess Who Died as Jeff.

Rio Mangini's Net Worth And Salary

Rio Mangini has an estimated net worth of six figures but the amount is still under review. He is earning a good amount from his works in movies and TV shows.

He has appeared in the various movies and TV shows Everything Sucks!. Just Add Magic. Lethal Weapon, Bella and the Bulldogs, One Crazy Cruise, Miles from Tomorrowland, Finders Keepers, and Good Luck Charlie.

As per some online sources, the average salary of a TV stars ranges between $150k-$1 million.

Rio Mangini has been nominated for several awards for his acting and for playing pianos as well. He has won some awards including

Rio Mangini, the rising star, is giving more priority to his career. Everything Sucks! actor, Mangini busy with his upcoming projects has little time to spare to be involved in any love affairs. He has not been spotted with any ladies and has not introduced anyone as his girlfriend so, he might possibly be single in the present days.

Mangini is close to all the fellow casts of Everything Sucks! but especially with Sydney Sweeney. He is also close to his parents.

He considers American sitcom, iCarly cast members as his ideal.

As of now, he resides in LA along with his family members.