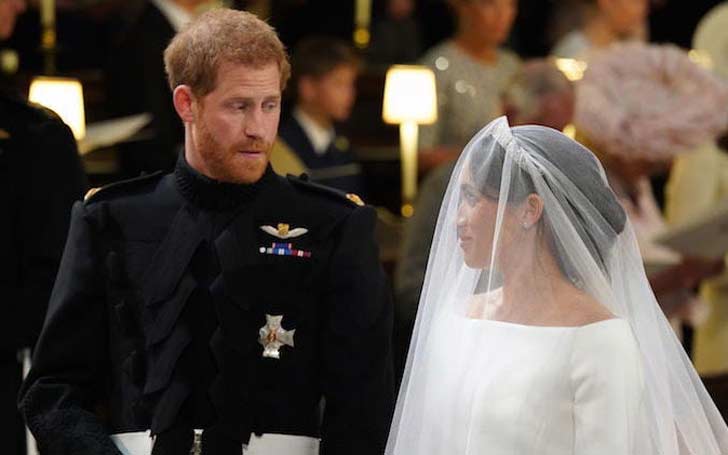 Prince Harry and Meghan Markle officially tied the knot in a royal ceremony at St. George's Chapel, Windsor Castle on 19 May 2018. Their royal wedding was in limelight in the global media due to the breaking of the age-old tradition of the royal wedding, extravaganza, and high-profile nature.

From their first meeting to walking down the aisle of St. George's Chapel together and exchanging holy vows of matrimonial unity; their saga of love story is truly a fairytale. Without further ado, let's dive in to read about how the love story between Prince Harry and Meghan Markle began.

How The Love Story Between Prince Harry and Meghan Markle Started?

Prior to meeting each other for the first time, Meghan Markle was busy working with various charity organization such as Wolrd Vision; and Prince Harry was busy with his own charity and philanthropy works.

Harry and Meghan first met on a blind date in July 2016. They were introduced by their mutual royal friend, Violet Von Westenholz. It is also claimed that British fashion designer Mischa Nonoo was also instrumental in their meeting. 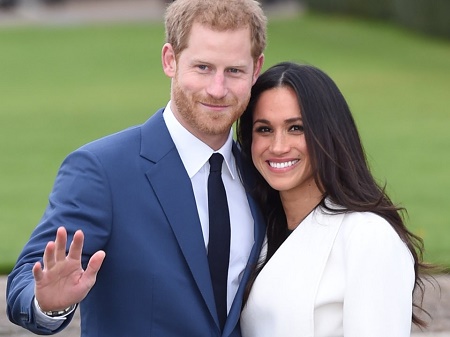 It was love at first sight for Prince Harry, but they didn't start dating straight away.

They met for a drink but promptly got along. "I think very quickly into that, we said, 'Well, what are we doing tomorrow? We should meet again,'" she added.

"We met once, then twice, back-to-back—two dates in London, at the beginning of last July," Harry revealed. 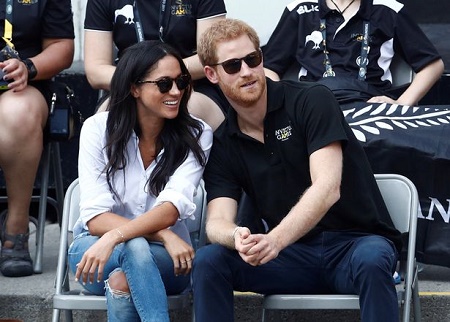 It was tough love at first for them as Harry was in Africa for his charity works and Meghan was busy with her Suits commitment. However, they conversed with each other via technology and capitalized on leisure time to meet up.

It is believed that they only started dating during Halloween party in Toronto in 2016. Prince Harry was able to persuade Meghan to go with him to visit Meno-A-Kweno campsite in Botswana; on the third date. As per the report, this trip solidified their relationship and strengthened their bonds. 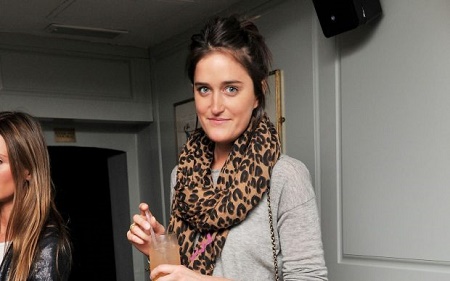 They managed to keep their love life and relationship under the radar for six months. When the news of their relationship revealed in the media, Meghan's family had to endure abuses, harassment, racial slurs, and trolls. Her poster was smeared in many places, and negative hate comments were posted on her social media profiles.

Unable to hold in his anger anymore; Harry jumped in defense of his lover and confirmed Meghan as his girlfriend. He also bashed in media and other audiences for abusing and harassing his lady love. He also slammed the media for arbitrarily covering his relationship with Meghan.

Prince Harry said via an announcement from Kensington Palace:

"Some of this has been very public—the smear on the front page of a national newspaper; the racial undertones of comment pieces; and the outright sexism and racism of social-media trolls and web article comments..." 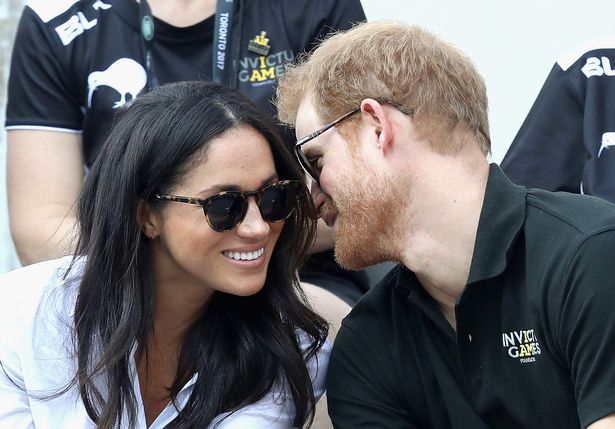 On September 28, 2017; Harry and Meghan made their first appearance in Public together as an official couple; during Toronto Invictus Games.

The couple has been spotted enjoying picking out a Christmas tree for the festival, holding hands in West London while on their way to watch show The Curious Incident of the Dog in the Nighttime. 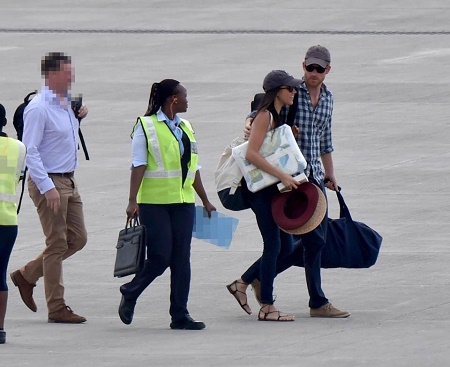 The couple attended the wedding of Kate Middleton's sister Pippa Middleton and James Matthews in May 2017. Meghan was able to avoid cameras and paparazzi and meet with Prince Harry during the wedding ceremony.

Their shared interest and passion in humanitarian works, philanthropy, charity, and activism played a crucial role to solidify their romantic relationship.

Prince Harry and Meghan Markle were officially engaged on November 27, 2017.

Prior to announcing an official engagement, the couple received blessings from Prince Charles, Prince Williams and his wife Duchess of Cambridge Kate Middleton. As per the report, Meghan was introduced to Queen Elizabeth II on the occasion of mother's day on 26 March 2017. 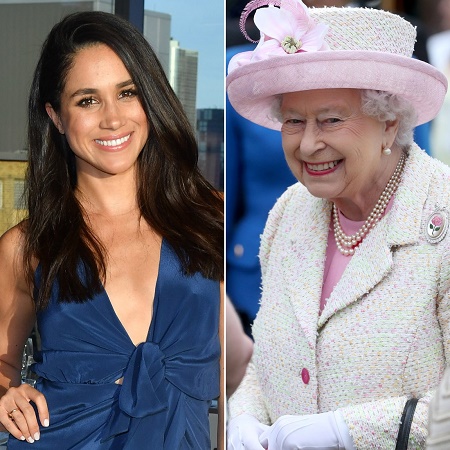 The Queen mother was impressed with Meghan and glad to see her grandson happy. A source claimed that the Queen was really  “delighted to see Harry in a loving relationship" and supportive of his decision to wed Meghan. 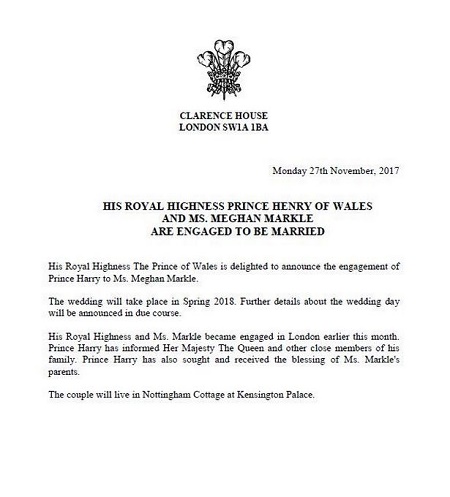 CAPTION: Official declaration of the royal engagement between Prince Harry and Meghan in 2017 SOURCE: Kensington Palace

The royal wedding of Prince Harry and Meghan Markle went down on May 19, 2018, at St. George's Chapel, Windsor Castle. Their wedding on Saturday went against tradition, as royal weddings usually take place on a weekday.

On the morning of the wedding, it was announced that the Queen has conferred the title of the Duke of Sussex to Prince Harry; making Meghan the Duchess of Sussex. The wedding took place in St George's Chapel at Windsor Castle at 12 pm; making them the 16th royal couple to celebrate their marriage at Windsor Castle since 1863. 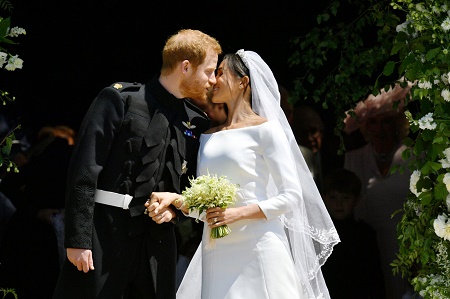 The couple was granted permission by the Queen to marry and the royal family paid for all the core aspects such as service, music, flowers, decorations, and reception. During the wedding vows, Markle did not promise to “obey” Harry; and the couple opted to use words such as “you” instead of “thee” and “thou”.

Meghan's father, Thomas Markle, was not at the wedding to walk his daughter down the aisle, because of his health. In her father's absence, Prince Charles met her half-way and gave his future daughter-in-law away.

Markle’s ring was fashioned from a piece of Welsh Gold, gifted by the Queen, while Prince Harry's was created from platinum with a textured finish. After the marriage ceremony was over,  they undertook a carriage procession from St George's Chapel through Windsor town returning to Windsor Castle. 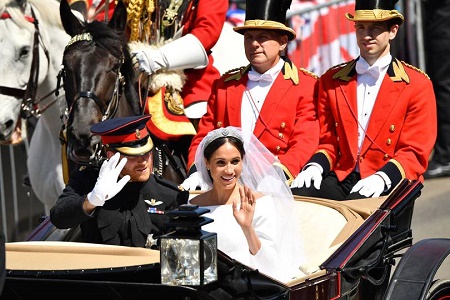 Both Prince Harry and the Duke of Cambridge wore the frockcoat uniform of the blues and royals, which were tailored at Dege & Skinner on Savile Row.

The royal wedding was attended by only 600 guests; in contrast to the Duke and Duchess of Cambridge who wed in front of 1,900 guests. The spectators included the host of who's who such as David and Victoria Beckham, George and Amal Clooney, Elton John, Oprah Winfrey, etc. among many others.