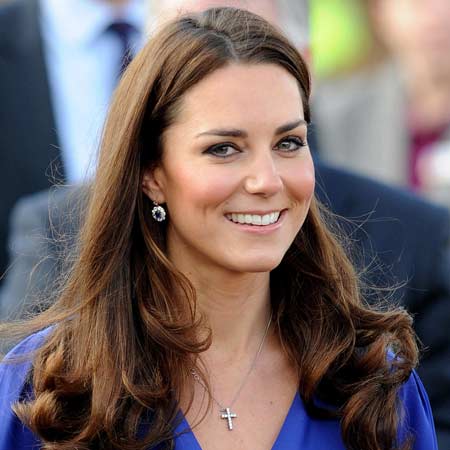 Kate Middleton; the wife of Prince William is officially titled as Catherine, The Duchess of Cambridge. She is the first person in the history of United Kingdom to enter royal family though being a commoner.  She studied art history at the University of  St.Andrews in Scotland where she met Prince Willaim.

Besides being future Queen, she is also notable Philanthropist and is involved in various Charitable works following the footsteps of her mother in law Late Princess Diana. Her fashion also has a huge influence on British and American media often referred as "Kate Middleton Effect."

Catherine Elizabeth Middleton also known as Kate Middleton was born on Reading, Berkshire England on January 9, 1982, as the eldest daughter of three children to father Michael Middleton and mother, Carole Middleton.  Both of her parents were airline employees, her mother air hostess, and father a dispatcher in British Airways.

After getting married her parents founded a mail-order party goods company which eventually turned them into multi-millionaires.

At the age of four, she went to St.Andrews prep school then briefly to Downe House and Marlborough college. At her school level she was often bullied and taunted by her senior students, but that did not stop Middleton to study. She pa s sed 11GCEs and three A-level exams.

At 2001 she was enrolled at the University of St.Andrews in Fife, Scotland and graduated from there in 2005. It was the university where she met Prince William of Wales. Middleton and Prince Williams shared several cla s ses together and went on to become friends, but at that time Kate was dating a senior from the college.

Both of them were friends, but Prince Williams developed feelings for her when he saw her wearing a revealing dress at the Charity show. As per the reports, he bought the dress for $139,506, and it is still hanging in his wardrobe.

After Middleton's boyfriend graduated from the college, the relationship between Prince William and Kate Middleton blossomed. At first, they decided to keep their relationship secret due to Prince's distrust of British press, but in 2004 she was caught by Paparazzi in Royal Family Ski trip.

Both of them graduated from the college in the year 2005 doing an honors degree in art history and soon Prince Willams headed for Military academy.

As the girlfriend of the prince finding a job was difficult at first, but she found an acceptable position as an a s sistant accessories buyer with British Clothing chain Jigsaw in London.

She later left the company to study Portrait photography. In 2007 rumors about their break up were spread though they were seen together in several events of Royal Family. The rumors were a false alarm.

After almost eight years of Romance finally, it was announced that the couple was getting engaged on November 16, 2010. It was reported that Prince proposed her during the vacation in Kenya and presented his Mother's wedding ring.  On April 29, 2011, the couple got married at Westminister Abbey in London. Before the wedding, Queen Elizabeth granted the title of Catherine, Her Royal Highness the Dutchess of Cambridge to Middleton.

After much speculation and rumors finally on December 3, 2012, it was officially announced by St.James Palace that Middleton was pregnant.  On July 22, 2013, Palace announced that she has given birth to a baby boy in St. Mary's hospital and was named George Alexander Loius. He stands third in line to the British throne after Prince Charles and Prince Willam.

Following the footsteps of her mother-in-law, Late Princess Diana, Kate Middleton is also involved in various Charity work.  In January 2018 with her husband, Prince Williams and Prince Harry the royal trio announced to launch a website designed to provide resources for teachers and schools seeking help in Mental health.

Besides this, she has also been involved with various organizations and provides funds to them which includes  The Art Room, Action on Addiction, Natural History Museum, Anna Freud center, Sportsaid and the 1851 trust.

She is also local volunteer leader with the Scout Association in North Wales. In February 2018 she became the fundraiser for the Royal College of Obstetricians and Gynaecologists and now has launched a three-year worldwide campaign to raise awareness about the profile of Nurses.

Being part of Royal family is not so easy as it seems, the media and paparazzi surround you all the time, and even the slightest mistake may lead to huge controversy. Same happened to Middleton when the topless photos of her sunbathing were released by French media in September 2012. After the pictures were leaked, Royal family began the legal battle to attain the rights to photos in the court which eventually they won.

Kate Middleton's Net Worth And Salary

Kate Middleton is a part of the Royal Family of the United Kingdom whose estimated net worth is about $88 Billion inherited over the generations. But before being part of Royal family, she was part of a rich family who has an online party supplies business named Party pieces whose net worth is to be believed around $50 million. Before moving to Royal Palace, she lived in an apartment purchased by her parents in West London for $1.4million.

According to various reports her net worth is to be around $7 Million, and on the other hand, her husband's net worth is around $35 Million.