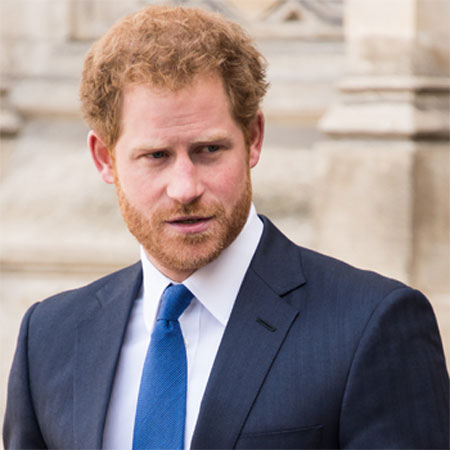 Prince Henry, the Duke of Sussex (Prince Harry) is a member of the British Royal Family. He is the youngest son of Charles, Prince of Wales and Princess Diana. He is sixth in the line of succession to the British throne after his eldest brother Prince William’s third child Prince Louis of Cambridge.

Prince Harry is the youngest grandson of Queen Elizabeth II- the Queen of the United Kingdom and other Commonwealth realms. Prince Harry worked several years in the British Military Force until leaving from his duty in 2015.

Prince Harry is married to former Hollywood actress and the Duchess of Sussex Meghan Markle on May 19, 2018.

Born in London, England, on 15th September 1984, Prince Henry of Wales, known as Prince Harry, is the second son of Princess Diana and Charles, Prince of Wales.

Harry currently volunteers for the wounded army members of the armed forces as well as carries out his duties as a member of the royal family. He is also involved in numerous charitable causes.

Prince Harry was born as Prince Henry of Wales on 15th September 1984, at St Mary's Hospital in Paddington, London. He belongs to Caucasian ethnicity & holds a British nationality. He was baptized at St George's Chapel, Windsor Castle on December 21, 1984.

Harry is born to Prince Charles and Princess Diana who divorced in 1996 and the following year on 31st August his mother died in Paris after suffering injuries in a car crash. He has a brother, Prince William.

Harry has been under the media attention since childhood starting from his first day in school in September 1987 at the Jane Mynors' nursery school in London. He also joined pre-preparatory Wetherby School, in London in 1989.

In 1992 Harry enrolled at the independent preparatory boarding school ‘Ludgrove School’ in Berkshire. He lived with his family in Kensington Palace & enjoyed the weekends with them in the family estate High Grove House in Gloucestershire.

After completing his schooling, Prince Harry took a gap year, spending time in Australia, working on a cattle station and competing in Young England vs. Young Australia Polo Test match. He also traveled to the Lesotho, where he worked with orphaned children & produced the doc u mentary, The Forgotten Kingdom.

On 8th May 2005, Harry entered the Royal Military Academy Sand Hurst, where he was known as Officer Cadet Wales, and joined Alamein Company. In April 2006, he completed his officer training and was commissioned as a Cornet in the Blues and Royals.

On April 13, 2008, he became a Lieutenant. He received an Operational Service Medal from Afghanistan in May 2008 for his military service in Afghanistan that included patrolling in hostile regions & aiding the Brigade of Gurkhas in driving back Taliban insurgents.

Harry decided to become an Apache, helicopter pilot. After meeting required standards, he starts training in Defence Helicopter Flying School at RAF Shawbury and on 14th April 2011 he earned his Apache Flying Badge.

In October 2011, Harry went to the US military base in California to undertake helicopter gunship training & returned to England in November of the same year to finish his Apache helicopters training course at Wattisham Flying Station in Suffolk.

On 8th July 2013, The Ministry of Defence announced that Harry has qualified as an Apache, aircraft commander. He created an international Paralympic-style sports event ‘Invictus Games’ & launched it on March 6, 2014.

The participants of the multi-sport event include injured, wounded & sick army personnel also a s sociated veterans. He is a patron of Invictus Games Foundation and various other endeavors that a s sist wounded servicemen.

On 4th June 2015 Harry became Knight Commander of the Royal Victorian Order (KCVO), and on 19th June of that year, he ended his official duties with the Armed Forces.

Harry has remained patron to many organizations & charities including HALO Trust, WellChild, Walking With The Wounded & the London Marathon Charitable Trust. Back in September 2009 he along with Prince William established The Foundation of Prince William & Prince Harry to advance their charitable endeavors.

Prince Harry belongs to the royal family, and he is the youngest son of Prince Charles and Princess Diana. He has an estimated net worth of $40 million which includes roughly $16 million inherited directly from his mother, Princess Diana after her death and grandparents.

In 2016, he received around $4.2 million from his father to cover the cost of his official royal duties along with his brother, William, and sister-in-law Kate Middleton. His wife to be Meghan Markle has $5 million net worth.

As per some online sources, the total worth of Britsh royal family is between $775 million-$1 billion, and they aren't on the list of richest people in the UK, but individually the family members earned millions of dollars. In the list of wealthiest royals, King of Thailand, Maha Vajiralongkorn beats everyone with $30 billion.

According to Fortune, his grandmother, Queen Elizabeth has a personal fortune of around $425 million. She has a personal property like Balmoral Castle and Sandringham House which isn't owned by the Crown Estate.

His nephews, Prince George, has a net worth about $3.08 billion and Princess Charlotte has a net worth even more than her brother estimated around $3.85 billion according to the Brand Finance.

Prince Harry and Meghan Markle first met in 2016 during the Invictus Games in Toronto where Markle was shooting for her show.

After few months, on November 6, Kensington Palace issued a statement which confirmed their relationship and requested the media and people to respect the couple privacy after Markle had been the victim of racist and sexist social media trolls as well as with false news and hara s sment by paparazzi.

CAPTION: Prince Harry and his wife Meghan Markle, the Duchess of Sussex  SOURCE: The South African

Prince Harry and his fiancée went for an interview on the following day of their engagement announcement. When Markle flashed her glittering diamond ring in front of a media.

In early 2018, Prince Harry invited a former US’ President Barack Obama in his wedding. After receiving his invitation, Sir Obama also replied that he was happy to join the royal ceremony. But, Obama later said that he won't attend the royal wedding.

The duo celebrated their 2018 valentine in the Edinburg, Scotland. Since their engagement, the duo is attending several events together.

Meghan Markle, an American actress who is popularly known for her work in TV series, Suits. The duo is dating since 2016 and shares a good bonding with one another.

Previously, Harry was romantically involved with Chelsy Davy who is the daughter of Zimbabwean, South Africa-based businessman Charles Davy. Davy was confirmed to be his girlfriend in an interview conducted for his 21st birthday, and he said,

Would love to tell everyone how amazing she is but once I start talking about that, I have left myself open… There is truth and there are lies and unfortunately, I cannot get the truth across.

After the official announcement of Harry and Davy relationship, the duo was often spotted together. She attends Prince Harry's graduation ceremony and was present in the function where he received his Operational Service Medal for Afghanistan.

However, the pair couldn't handle their relationship and split apart in early 2009 after being in a relationship for five years. As per sources, the duo was in an on-off relationship before their official announcement. He once also dated Love Island star, Camilla Thurlow.

After breaking up with Davy, Prince Harry met Cressida Bonas, granddaughter of Edward Curzon, 6th Earl Howe, through the help of his cousin Princess Eugenie and eventually fell in love. The pair tried their hard to keep their relationship out of the spotlight, but they were often spotted in London.

In 2014, tabloids circulated the news of their possible engagement but the same year, the pair ended their two years relationship and their engagement never happen. According to BBC News report, the duo split is "amicable, " and still, they remained in touch and referred to one another as best of friends.